Home All The News Carrick on Sanchez: Not bad for a little man… 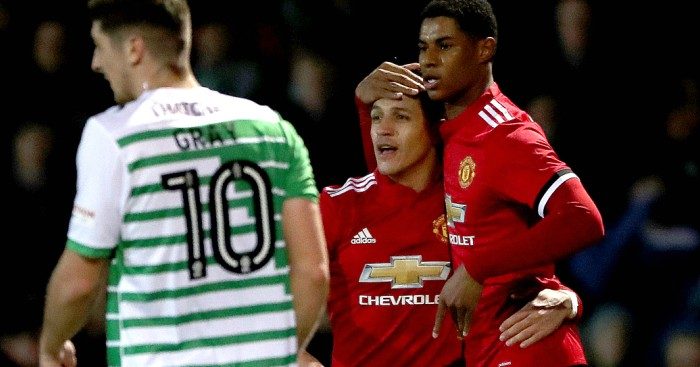 Alexis Sanchez’s defensive “fight” can set him apart at Manchester United, according to team-mate Ander Herrera.

Sanchez laid on two goals in a man-of-the-match debut as United coasted past Yeovil 4-0 at Huish Park on Friday, strolling into the FA Cup fifth round.

The Chile forward teed up Marcus Rashford and Herrera for goals, before Jesse Lingard and Romelu Lukaku glossed the scoreline late on.

Allied to Sanchez’s attacking prowess, Herrera believes the ex-Arsenal star’s grit for teamwork will prove a huge asset to United.

“What I really like from him is the way he fights when the team loses the ball,” Herrera told MUTV. “He’s always ready to be the first defender for the team, and that’s big for us.

“Obviously we know his quality on the ball, he’s amazing, but his fight, the way he defends, he’s the first player to defend – I really like it.”

Sanchez jumped straight into United’s line-up at the first opportunity following his move from Arsenal, where Henrikh Mkhitaryan moved in the opposite direction.

Michael Carrick captained United on his first showing since September, stabilising the midfield for Jose Mourinho’s travelling side.

And the former England midfielder was another to hail Sanchez’s signing as a coup for United, branding the playmaking forward as a typical Old Trafford star.

“He is not bad is he? Not bad for a little man,” Carrick told MUTV.

“He is going to be a terrific player, he is a proper Manchester United player, and it’s great to have him here.

“He is so exciting and so dynamic. He’s always looking to create opportunities, to play forward and the fans are going to enjoy watching him, hopefully we will enjoy playing with him.”

Yeovil boss Darren Way praised his League Two side for pushing United as hard as possible, before adding to the positive voices around Sanchez’s Red Devils start.

“It’s a total honour for us to go up against a side of that quality, and a player of that calibre.

“It was a huge honour for me to speak to a manager of Jose Mourinho’s class as well. Even in the office he just oozes class. He was very humble with me.

“He knew everything about me. It wouldn’t surprise me if he knew my children’s names. And to share that moment with him was very special.”