Home Manchester United Carrick: ‘There was no way I was walking away from Man Utd’ 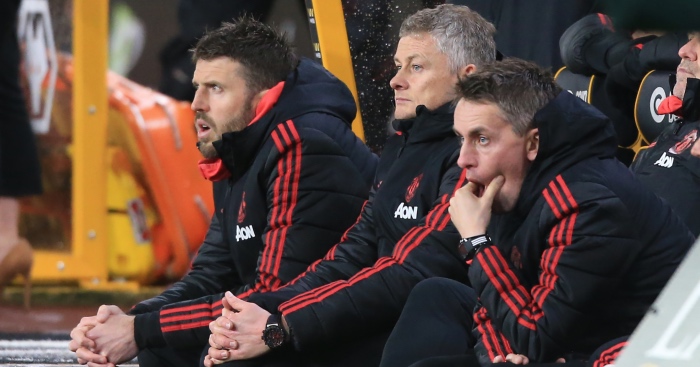 Manchester United first-team coach Michael Carrick has spoke of the “mixed feelings” he had about making the transition after retiring.

Carrick called time on his 19-year playing career last summer, having spent 12 of those years winning every trophy available to him at club level with United.

He then became a part of Jose Mourinho’s newly-formed backroom staff, keeping the role after Ole Gunnar Solskjaer replaced the Portuguese in December.

Carrick admits “there have been ups and downs throughout” his first season in coaching, but is convinced he made the right decision.

“I was ready to finish playing, I’d had enough,” he told the club’s official website.

“Luckily I could go out when I was ready. Not many people get into that situation where they can decide for themselves and fortunately I was ready. In the last couple of years I just knew. I wasn’t at the level I wanted to be at.

“I had just done the same thing for so long and it was time. I always had in my mind about having time away from football for the kids and the family, but there was no way I was walking away from this club when the opportunity came along. I am so glad that I made that decision and I am here.

“It has been a massive change for me. Playing for so long, you just get used to it, used to doing the same things, having that routine and focusing on performing for yourself – getting the best out of yourself.

“You kind of have mixed feelings when you go into being a coach, thinking about how it is going to be and how different it is going to be. It is a big challenge and very different to playing. It is something I have really enjoyed. Obviously, there have been ups and downs throughout the season, but I am really enjoying myself at the moment and looking forward to what is ahead.

“I am never at home – just ask my wife! She knows about that. It is longer hours and obviously a lot more work, but you get the rewards.”