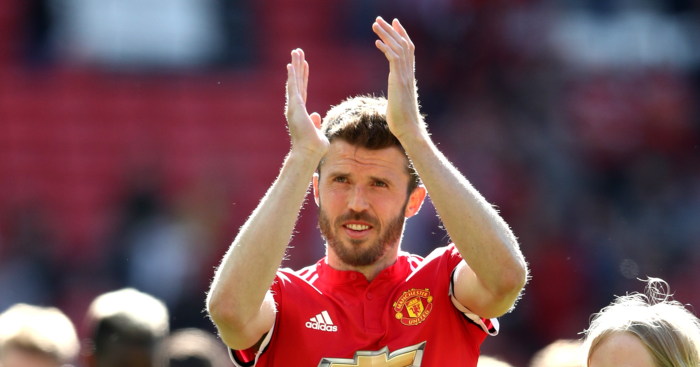 Veteran midfielder Carrick hung up his boots on Sunday after playing 85 minutes of United’s final Premier League game of the season against Watford.

The following day he began his new job as a member of manager Jose Mourinho’s coaching staff, with the small matter of this weekend’s clash with Chelsea at Wembley to prepare for.

“It changes overnight,” Carrick said. “I am not training this week. I am going to jump on the staff.”

The 36-year-old did have other options as he approached the end of his playing career but the chance to work under Mourinho was too good to refuse.

“A couple of years ago I thought maybe it would be a good thing to spend time with the family, but then it’s about timing and opportunities,” said Carrick, who made 464 appearances for United over 12 years after earlier spells with West Ham and Tottenham.

“You never know what is going to be around the corner. As soon as this came up I didn’t think twice.

“He is one of the best, he’s been around for many years and it all fits in. I’ve been at this club, and it is such a great club, so I obviously know the club and the manager.

“So learning from him and the backroom staff, and trying to bring the kids through and have an influence on that just fits. Hopefully it still fits in a couple of years’ time.”

Becoming a manager himself is something Carrick might want to pursue one day but that is not something he intends to push for yet.

He said: “You’ve got to go step by step. I’m not getting carried away here.

“Just because I was a half-decent player it doesn’t guarantee you’re going to be a success in whatever you do. I’m well aware of that. I’m not getting ahead of myself.

“The end-game, maybe, if I get into it and I think I’d like to manage – probably at this stage my answer would be yes (I would like to be a manager) but I’m not getting carried away.

“I don’t want to be throwing quotes out there saying I want to be a manager.”