Home Mediawatch Carried away much? Now Antonio Conte is issuing ‘threats’ after a ‘mass brawl’ 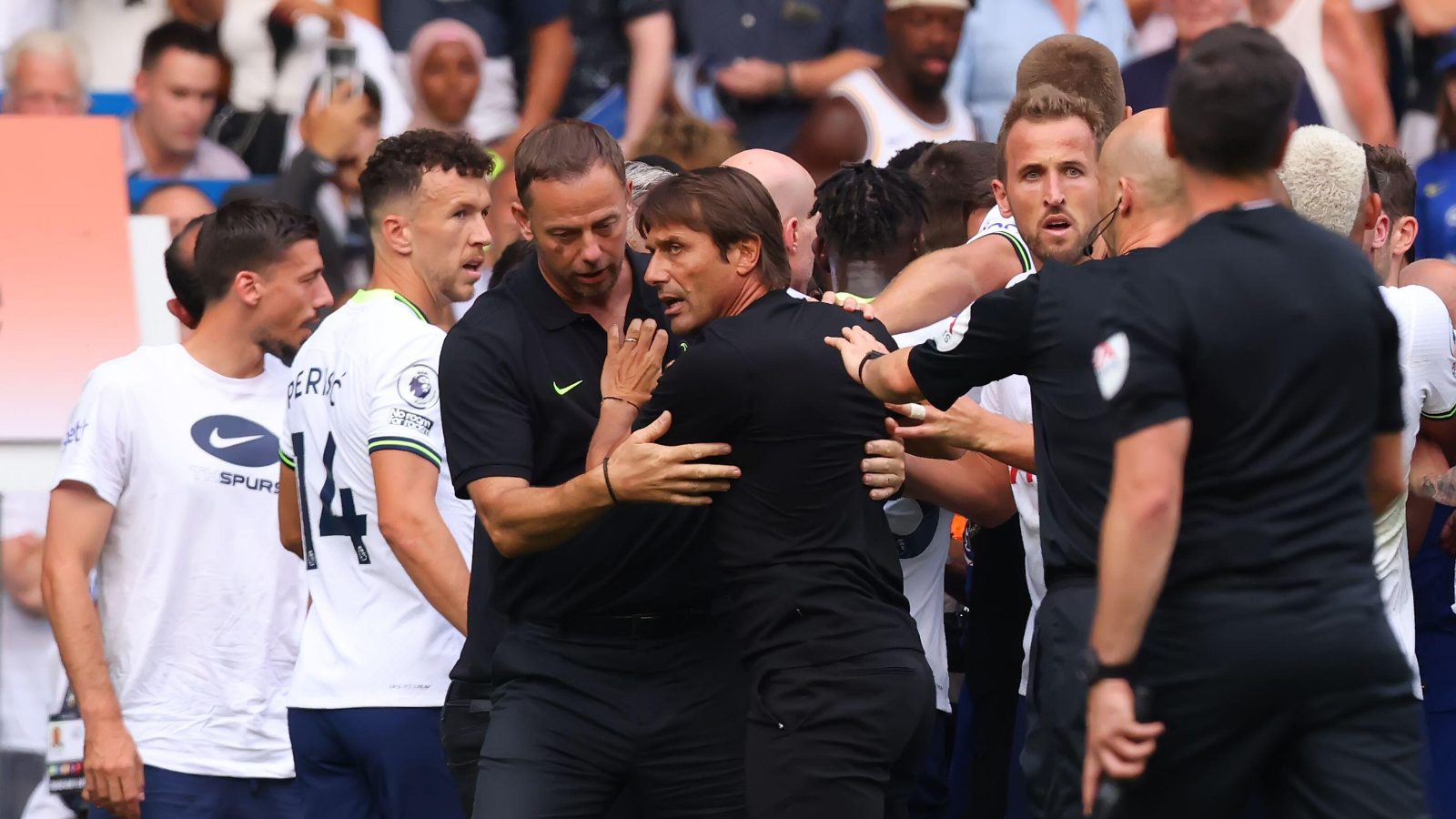 They think it’s brawl over
‘LONDON BRAWLING’ is a lovely headline but it does rather suggest a ‘brawl’, which absolutely did not happen during Chelsea v Tottenham, no matter how hard we try to inflate the silliness between some rather angry men.

The Sun are more than happy to stoke those flames, claiming that ‘Conte and Tuchel initially came to blows’ (they didn’t) and twice referring to a ‘mass brawl’. Mediawatch is unsure on the correct etymology here but we are pretty convinced that a ‘mass brawl’ has to include some actual, you know, brawling. Not just pointing and really long, painful handshakes.

Cluedo
When Thomas Tuchel was not refusing to let go of Antonio Conte’s hand in what was definitely not a brawl but might well have been a misguided romantic gesture, he was apparently giving away his plans for reported Chelsea target Frenkie de Jong. Mediawatch cannot help but think that he should have concentrated on the game instead, but the Mirror are here with the story:

Did he shout “be more De Jong” at Jorginho? Was N’Golo Kante told to “be more Dutch, you prick”?

Well no, of course not. It’s all just bollocks.

‘For much of the first half, Thomas Tuchel was seen bellowing tactical instructions at Jorginho – the central midfielder nearest him on the touchline – and N’Golo Kante, who was just about within earshot on the far side of the pitch.

‘The Chelsea boss was far from happy with the positioning of Jorginho, repeatedly asking the 30-year-old to move wider to help mark Dejan Kulusevski, while Kante’s distribution also frustrated the German.’

And that, ladies and gentleman, ‘offers clue into Frenkie de Jong plan’.

Hmmm. What it actually offers is a clue into how desperate some outlets are for clicks.

I was only joking, my dear…
Meanwhile…

Oh it’s a ‘feud’ now. A ‘prolonged and bitter quarrel or dispute’ that lasted literally hours.

‘ANTONIO CONTE continued his feud with Thomas Tuchel long after the two bosses had headed home from the Battle of the Bridge 2.0.

‘The Italian took to social media joking that he should have TRIPPED UP Tuchel as the Chelsea gaffer celebrated his side’s second goal.’

So The Sun absolutely know it was a joke. Because it was a sodding joke. No matter how many CAPITALS they use.

Give me strength
Where one leads…

Intent to harm
And then there’s the Daily Star website. Now this ‘feud’ has become, well…

‘Antonio Conte took a swipe at Thomas Tuchel on Instagram following their heated touchline bust-ups during the thrilling 2-2 between Chelsea and Tottenham at Stamford Bridge on Sunday.’

He ‘took a swipe’! With laughing face emojis. The sick b***ard.

‘The Italian posted a clip of Tuchel sprinting past him down the touchline in the aftermath of Chelsea’s second goal, insisting that he wished he’d tripped the German up.’

Are ‘insisting’ and ‘joking’ synonyms now?

””Lucky I didn’t see you, making you trip over would have been well deserved,” Conte wrote, along with three laughing face emojis.’

Yes. It sure sounds like ‘an expression of intention to inflict evil, injury, or damage’.

The Sky’s not the limit

Bit disappointed it’s not F365 but Kelly Cates might be getting a little reminder e-mail from Sky Sports today that they have their own website… pic.twitter.com/Ikb81X6duq

Shock horror
It’s two weeks since the news first emerged that Manchester United (and Chelsea) were interested in Jamie Vardy. So obviously…

A shock to who? Who are the MailOnline quoting in their quote marks?

Oh. They’re just quoting themselves. That’s not how it works, fellas.

Oddly, The Athletic – the source of this particular story – don’t describe it as a ‘shock swoop’. Because it’s not.

Heaven knows I’m miserable now
And what’s better than pretending to be shocked by an old transfer rumour? Why, conflating it with another non-story of course.

The cast of thousands at The Athletic wrote this…

‘It is not only Ronaldo who has raised eyebrows, with sources close to other United players surprised to see reports that fellow forward Marcus Rashford’s brother and representative had met serial French champions Paris Saint-Germain for talks in recent weeks.’

If a ‘raised eyebrow’ is a sign of unhappiness, then Carlo Ancelotti must be sodding miserable.