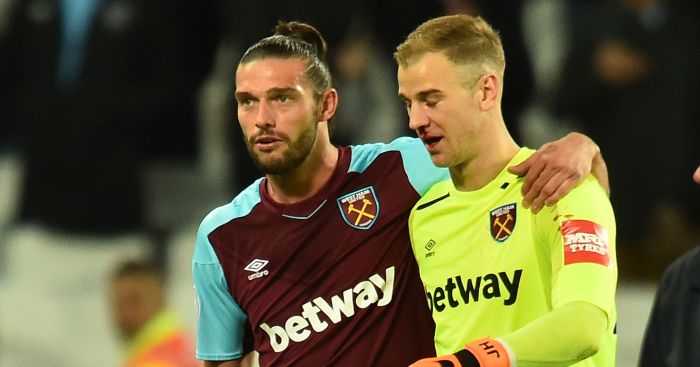 Andy Carroll admitted the point he snatched for West Ham against Stoke could be vital but insisted: “We’re not safe yet”.

Fit-again striker Carroll climbed off the bench to volley a last-minute equaliser on his first appearance since the turn of the year.

A 1-1 draw left the Hammers seven points above the Premier League drop zone with five games left and, crucially, kept Stoke in the bottom three.

“I thought we played well throughout,” said Carroll. “We took points off them, and it’s a point for us, so it was a good result in the end.

“We’ve still got five games left and we’ve got to win them as no one is safe. It’s tough at the minute and we’ve just got to keep working.”

In the week following Pep Guardiola’s Manchester City slickers being confirmed as champions it was something of a throwback to see two old-fashioned targetmen, Carroll and Peter Crouch, on target at the London Stadium.

Crouch, also a substitute, pounced on a mistake by goalkeeper Joe Hart – in front of England manager Gareth Southgate – to prod Stoke ahead with 11 minutes remaining.

Stoke are five points from safety with just four games to play but manager Paul Lambert insisted: “We are still in the fight.

“It’s not as if we are on the ropes and hanging on. The point could be huge for us and we still have to win three games.

“There are a lot of hard fixtures for a lot of teams at the bottom so it will be interesting. It won’t be for the faint-hearted.”