Home All The News Carvajal: We’ve lost everything in this ‘sh*tty season’ 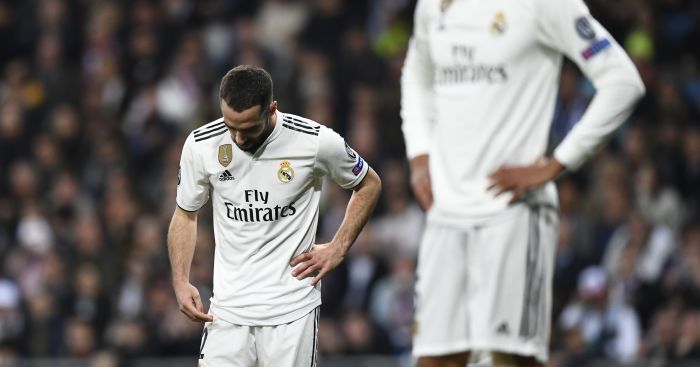 Real Madrid defender Dani Carvajal insisted the players could not “look for excuses” after Ajax dumped the Champions League holders out with a brilliant 4-1 victory at Santiago Bernabeu.

Los Blancos’ campaign continued to deteriorate following their exit from the Copa del Rey at the hands of bitter rivals Barcelona, who went on to press home their LaLiga dominance with victory on Saturday.

Ajax became the first team to overturn a 2-1 first-leg home defeat in the Champions League as they booked a place in the quarter-finals.

Real Madrid’s record of reaching the semi-finals in each of the last eight European campaigns was brought to a shuddering halt.

Without captain Sergio Ramos, who was suspended after deliberately collecting a yellow card in Amsterdam, Real failed to make the most of early dominance as Raphael Varane’s header rattled the crossbar before the visitors swept into the lead through Hakim Ziyech.

Dusan Tadic, who produced a brilliant display, set up David Neres for a second in the 18th minute.

Ajax looked to have put the tie to bed when Tadic swept in a brilliant third goal just after the hour – which was eventually given following an extensive Video Assistant Referee review to check if the ball had gone out of play in the build-up.

Substitute Marco Asensio briefly gave Real hope when he put the ball in off the post with 20 minutes left.

Lasse Schone, though, capped a brilliant night for Erik Ten Hag’s side when he curled in an angled free-kick over Thibaut Courtois on 72 minutes.

Real finished with 10 men after Nacho picked up two needless late cautions, while Bale limped on what looked like a serious ankle problem.

It was a fourth successive home loss for Los Blancos, with pressure mounting on Argentine coach Santiago Solari.

Carvajal said to Movistar Plus: “In one week, we’ve lost everything. Our opponent was better than us and deserved to progress.

“We’ve had a s****y season. I don’t see this as the end of a cycle. We have a young team, but the margin for improvement is enormous; we have to face that and not shy away.”

Speaking to Movistar, Solari added: “The season is difficult, but we are here to show our heart and character in difficult moments.

“Easy moments are easy for everyone, you can climb up and surf them, but difficult moments you have to show bravery.”