Home All The News Carvalhal wary of ‘sharks’ swimming around Swans 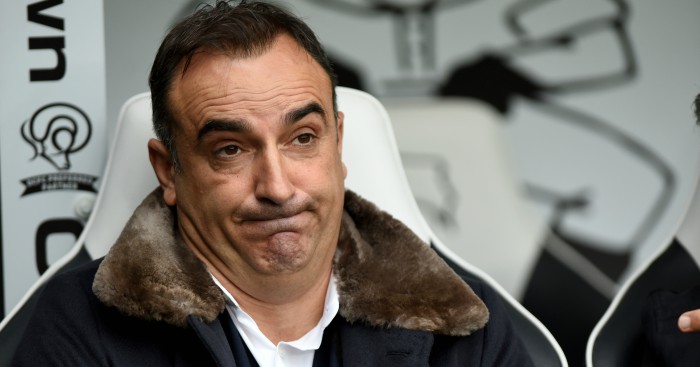 Carlos Carvalhal has insisted he is no clown as he continues to focus on the serious business of saving Swansea’s Premier League status.

Carvalhal’s colourful analogies have been a regular theme since he replaced Paul Clement.

But it is keeping the smiles on Swansea faces that the Portuguese is interested in after losing only one of his first 10 games in charge.

It is a run which has steered the Welsh club from a seemingly hopeless position at the bottom of the table to one above the relegation zone, albeit on goal difference.

“I don’t work in the circus, so I’m not here to make fun like a clown,” Carvalhal said ahead of Saturday’s home game against Burnley.

“I like a joke and to relax people, but the motivation and atmosphere is about everyone being together when everything must be connected.

“When you have lot of stress around your team it is important to make them smile.

“Of course, you show your personality. But you must act with what you have in front of you and adapt to the situation.”

Carvalhal is an engaging character whose descriptions of his January transfer targets – “I will look to the lobsters and sea bass, but if not we must buy sardines” – or likening beating Liverpool to “stopping a Formula 1 car in London traffic” have caused enormous reactions on social media.

And at his pre-Burnley press conference he prompted laughter when handing out traditional Portuguese pastries, known as Pasteis de Nata, to reporters.

But Carvalhal insisted fighting relegation is no laughing matter, saying: “The situation is still serious – but we have a better chance now of staying in the Premier League.

“We were the last team and five points away from safety, but in this moment we are not under the water.

“You put your head out and we are breathing fresh air. But the sharks are around and they can push you down again.

“We have to make sure these things do not happen and we stay above the water.”

Swansea hope to extend their remarkable recovery against Sean Dyche’s Burnley, who remain seventh in the Premier League despite a dramatic downturn in form.

Burnley have not won since December 12, a run of 10 games, but Carvalhal insisted: “It is not a good period to play against them.

“They are very organised and compact and I know very well the team and manager well from the Championship (when Carvalhal was Sheffield Wednesday manager).

“They are a dangerous side and can frustrate any opponent in the Premier League, but we will do our job and try to unlock them.”