Last week Norway and Germany’s national team made a protest against the abuse of human rights before their games, something outlawed by FIFA, though they graciously agreed to take no action against them for this. I should hope not. Last week Amnesty International appealed to FIFA to act on labour abuses as World Cup qualifiers kicked off.

The Independent published a David Harding piece last week highlighting how there are growing calls for a boycott of the World Cup.

Yet still there is no serious threat to Qatar holding this World Cup. Not yet. We must change that. It seems as though football’s exceptionalist spirit is alive and well. All manner of excuses have been given, not least that football is helping shine a light on the situation with migrant/slave labour.

FIFA says: ‘To be frank, we actually think that engagement and dialogue is the best way to promote understanding of universal human rights values.’

Which is just a shut-up-and-go-away whitewash, typical of all their press releases. Meanwhile people die.

Much of the building that the workers are constructing is only being constructed because of the World Cup, therefore awarding them the tournament has increased abuse of labour, not shone a light upon it.

Obviously, the way to ‘promote understanding of universal human rights values’ is by offering a multi-million pound sporting competition to the abusive country in return for stopping being abusive. The way it is now, they work the living sh*t out of the people who construct the stadiums, the ones still left alive are shipped out once the job is done, the tournament is played and afterwards everything goes on as before. That’s what’ll happen.

The fact that FIFA have already told Amnesty that ‘day-to-day due diligence’ of construction workers’ rights is carried out by the Supreme Committee, the government body overseeing the Qatar World Cup, is just not acceptable. Do you think it will give Qatar a clean bill of health? Of course it bloody will and FIFA know this, even as death in the desert happens. You can’t hand over inspection of the jail to the jailors. This is just lesson 101 in the human rights abuse play book. You’d have to be some numpty to not realise why they want to inspect their own working practices and standards. 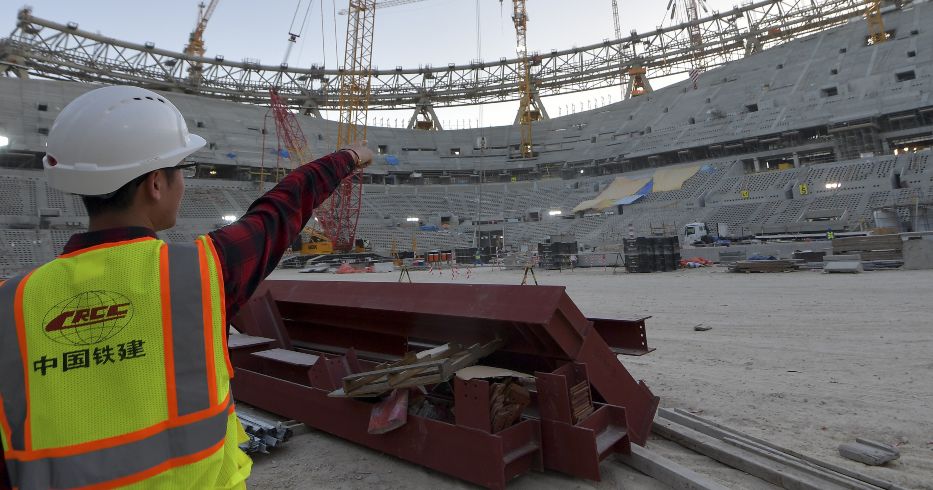 There are calls for Qatar to put in place proper health and safety measures, protect workers rights and standards, but it’s too late for all that now. They’ve been at this since 2014. Just asking them to be a little less evil isn’t going to work. They never should have been awarded the tournament and that fact remains as true now as when they ‘won’ the bid.

FIFA has pledged to leave ‘a legacy of world class standards and practices for workers in Qatar and internationally’ but given they’ve handed over the delivery of this to the supreme committee, how is that possible? It’s surely just more PR bullshit. Once it’s been played, football’s attention will be turned elsewhere.

Sadly, our FA has also been desperately trying to say nothing while saying something. ‘We believe that there is evidence of some progress being made by Qatar, however we recognise there is still much more to be done.’ Which is FA-speak for ‘we’re doing sod all and just want to get through all of this without making a stand, or will only take a stand when everyone else has’. Get a backbone, for God’s sake.

We should be making a stand and not only that, we should be proud to make a stand.

Football is not worth one single death, never mind 6,500 and I can’t believe I feel I have to say this. Surely that is obvious.

The quotes from some of the workers are heartbreaking.

“My life here is like a prison. The manager said: ’If you want to stay in Qatar be quiet and keep working.'”

“God knows there are days when I cannot continue, everything becomes too much…The only thing that keeps me alive is the thought of my children.”

“I remember my first day in Qatar. Almost the very first thing (an agent) working for my company did was take my passport. I haven’t seen it since.”

“The manager said ‘these men are causing trouble, they are lazy. Watch them closely. If they do not show up to work or try to escape, report them to the police.'”

Enough. All countries should withdraw. People are dying. Dying, for God’s sake.

It could easily be rearranged in any European country, or in North America for next summer. Hell, even if it couldn’t, that’s no reason to play it in Qatar. Just call the thing off. We can do without it, if doing with it means more bloody torture, exploitation and death.

I’d urge everyone to read the recently published Amnesty International statement on Qatar.

These people are not making this stuff up. FIFA released a World Cup Qatar 2022 Sustainability Strategy in 2019 but the worry is that this is all window dressing, designed to make everything appear to be fine, when it is far from fine, as the dead bodies are hauled off dangerous building sites and buried who knows where.

If England pulled out, it would be a serious statement of intent.

Don’t put the players in the invidious position of having to choose to play or not (though half a dozen of the world’s biggest names taking a boycott stance would be a game changer); the FA should just do the right thing.

There will be plenty of other World Cups, these poor people only get one life. What on earth do we think we’re doing, sanctioning this? How low can football get?

Read this and then come back and tell me this is all OK and we should be part of it  This should, in any reasonable world, disqualify them from holding a World Cup. That should not even be in question.

It could just as easily be you or I melting in the sun. You think those workers wouldn’t want some solidarity from us? They need someone to fight for them, to be on their side, not to turn their backs and say “sorry pal, I fancy us to do well this year, so…”

Doing nothing isn’t an option. We need to shame our own FA into withdrawing England from this festering boil of evil, and hope that others in other countries will do the same; clearly Germany and Norway will.

We don’t need much altruism here. We don’t need to be a saint. We can’t solve all the world’s problems, we can’t always make an unfair world fair, but we can bloody well solve this.