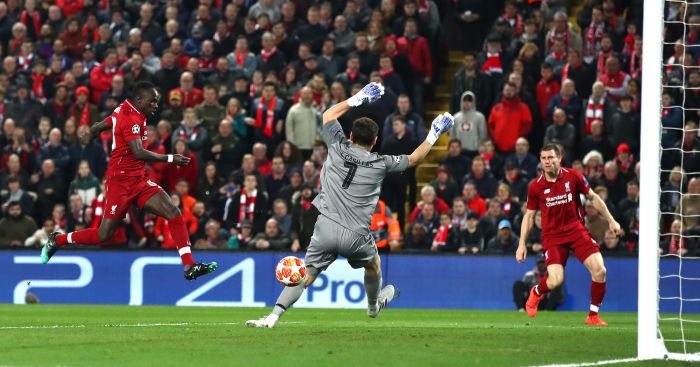 Goalkeeper Iker Casillas described himself as “100 percent optimistic” despite Porto’s 2-0 loss to Liverpool in the first leg of their Champions League quarter-final.

Liverpool struggled for fluency after the interval and the Portuguese champions are likely to provide stern opposition at the Estadio do Dragao next Wednesday.

And veteran Spanish keeper Casillas pointed to two key events which went against the Portuguese side at Anfield.

“I’m 100 percent optimistic !! Taking into account the results of the other Champions League ties we can not think that the tie is lost. The game at home is still to come and we will fight to get to the semi-finals. Thanks to all the fans for the support in Liverpool,” tweeted the 37-year-old, which he accompanied with two pictures.

The first picture was of Mohamed Salah’s reckless tackle on Danilo, which caught the Porto man above his ankle and which could have easily been punished with a red card.

“The Liverpool forward comes over the top of the ball and clearly plants his studs onto the shin of his opponent,” Clattenburg told the Daily Mail.

“UEFA guidelines on this type of challenge are clear – anything with studs above the ankle is a red card.”

Casillas also posted an image of  ball appearing to strike Trent Alexander-Arnold on the arm.

However, following a VAR review, Porto were not awarded a penalty in the first half at Anfield.

Liverpool will face Porto in the return leg of their Champions League quarter-final on Wednesday, April 17.