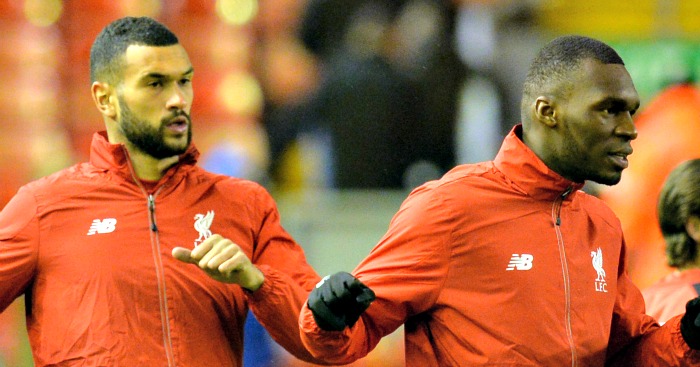 Steven Caulker admits he thought Jurgen Klopp was joking when he was asked to play as a striker against Arsenal.

Just over 24 hours after completing a loan move from QPR, the 24-year-old centre-back was thrown on up front by Klopp as they chased the game against Arsenal on Wednesday.

Fellow substitute Joe Allen salvaged a point with a 90th-minute equaliser and Caulker was immediately sent back to familiar territory to spend the remaining added time alongside Kolo Toure and Mamadou Sakho at the back.

It was a bizarre way to cap a surreal couple of days for the former Tottenham defender.

“I was shocked, I thought the gaffer was joking when he said it (go up front),” Caulker said.

“With only four or five minutes to go we had to go for it and it paid off. It was an exciting five or six minutes.

“I was delighted to get on the pitch and help rescue a point.

“It has been a bit of a roller-coaster but the adrenaline dragged me through.”

Shock is a word which keeps coming up as Caulker reflects on the speed of his move to Merseyside.

Klopp has spoken of his desire to bring in a central defender to help cover for injuries to Martin Skrtel and Dejan Lovren, but Caulker’s name was not even touted as one of the contenders with speculation suggesting the German would go for a foreign player like Neven Subotic, whom he worked with at Borussia Dortmund.

But Caulker’s Premier League experience – he has played top-flight matches with Cardiff and Swansea as well as Southampton and QPR, worked in his favour – even if his pitch time at St Mary’s was limited.

“It came as a bit of a shock as I’d had a bit of a frustrating time at Southampton and not had any game time, so then to come to a club like this is fantastic and an opportunity which I couldn’t turn down,” the one-cap England international said.

“I was behind two good centre-halves there. I signed just before they signed Virgil van Dijk and things didn’t quite work out for me but I thank them for the opportunity and now I have moved on to something even greater.

“It was definitely unexpected but I am happy to be here and the gaffer has filled me with confidence.

“For me the ambition is to get as much game time as possible, whether it is up front or in defence I just don’t care.

“To wear this shirt is such an honour and I’ll see where it takes me at the end of the season.”