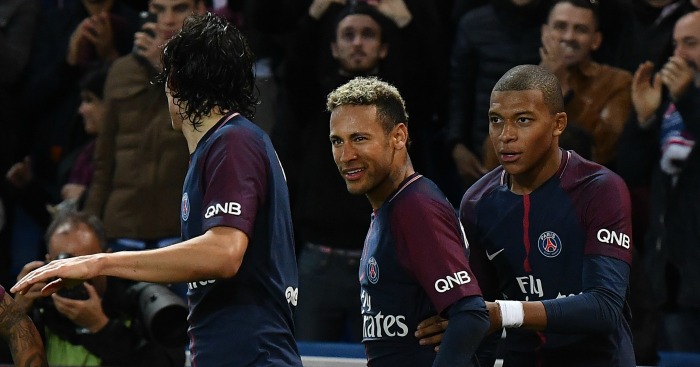 Edinson Cavani has responded to claims that he and Neymar had to be separated after PSG’s 2-0 win over Lyon at the weekend.

French newspaper L’Equipe have claimed that the pair had to be kept apart in the dressing-room after on-pitch arguments threatened to boil over into a physical fight.

On the pitch, Cavani was visibly angry when Dani Alves gave the ball to new £200m signing Neymar to take a free-kick, and then the Uruguayan insisted on taking a penalty that he then missed.

Nobody told Cavani that Neymar gets to take PSG penalties now 😂 after this, Neymar might get first dibs next time! pic.twitter.com/HbnMDxqci2

Cavani has now spoken to Gol de Medianoche de Radio Universal about the rumours of a fall-out.

As you might expect, he has played down the row and said such disagreements are ‘normal’ in football.

“These things are created,” said the Uruguayan. “I don’t know why these stories are created. The truth is that these are normal things; things that happen in football.

“I learned of the story just now talking with my brother, about people saying that Cavani won’t let anyone take penalties and that there’s a problem with Neymar. The truth is that there’s no problem.

“[Neymar] has just arrived and like I said from the off we are keen for him to adapt in the best way possible. I think that’s been proven because you can see he is adapting quickly.”