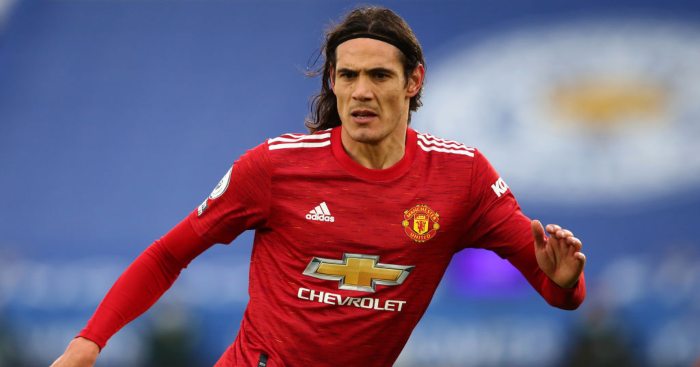 Man Utd striker Edinson Cavani has told his team-mates to “fight” for the badge ahead of their Premier League clash with Fulham.

Leicester City’s 2-0 victory over Chelsea on Tuesday night saw Man Utd knocked off top spot by the Foxes but the Red Devils have an opportunity to climb back to the summit when they face Fulham on Wednesday night.

Man Utd are in brilliant form with their last Premier League loss coming back on November 1 against Arsenal with Ole Gunnar Solskjaer’s men on a 12-match unbeaten run in the league.

And Cavani has urged against complacency as they face Scott Parker’s side on Wednesday, knowing a win will put them on 40 points and two clear at the top.

“I believe that one of the most important things that we need to be aware of, whenever we go into any game, is that we are Manchester United, and, irrespective of whether we are top of the league or in any other position, every other team that plays against Manchester United try to do their absolute best to try and beat them,” Cavani told United’s official website.

“It was also a similar situation for me when I was at PSG. Teams try to do the impossible to get a victory against one of the most legendary and best teams in the world.

“So ensuring we are focused and concentrated on this, should give us the energy to want to fight for this badge.

“And, right now, that we are top of the league, to also want to fight to stay right where we are. For all that, we need to be ready and mentally prepared to compete.

“Like I always say, the important thing isn’t just winning a couple of games, it’s having that consistency of always competing; competing in every game and for every ball, and concentrating to the absolute maximum for every situation that comes up in the game.

“And that’s what, in the end, allows you to achieve your ultimate goal.”