Home F365 Features Cech, Benteke and other key stats for each PL side so far 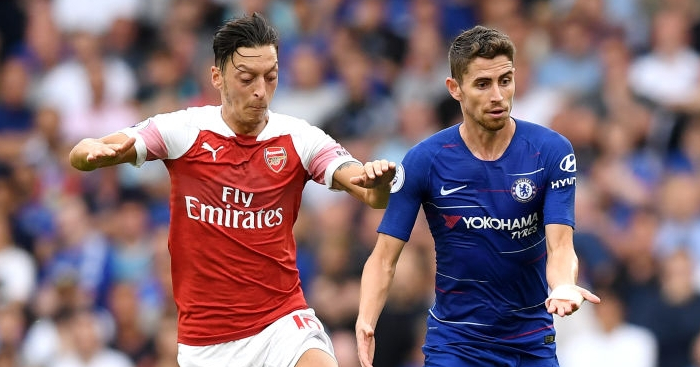 If you think four weeks isn’t much to go on stats-wise, you’re insufficiently obsessive. Lots of the numbers are just noise at this point, but we do have some genuine signals, both positive and negative, and it’s the job of us nerds to spot them. We’ll look at significant early stats for each of the Premier League teams, with Leicester to Wolves coming tomorrow. These are all numbers to watch as the season goes on.

ARSENAL
Guess what? Arsenal’s defence is poor. It may be even poorer than you think. They’ve allowed the third-most shots in the league – last year they were sixth best in that category. Admittedly, playing Chelsea and Manchester City hasnt helped, but playing Cardiff and West Ham should have. The Gunners are also the worst under-performers in the league in xGA, with Petr Cech ranking towards the bottom in shot-stopping.

In attack things look a lot better, but don’t look too close. They’re second in shots on target, which is great. But those shots on target are being fueled by 51.7% shot accuracy, and that’s just unsustainable for the entire season. They’re only eighth in total shots, and will need to create more scoring chances.

BOURNEMOUTH
Good old (or not so old) Eddie Howe. His sides go out and play the same way every year. You can always rely on their low intervention numbers. Last season they were 20th in tackles and 19th in interceptions; this year, after only four matches, it’s 19th in tackles and 18th in interceptions. Fouls are up, at least for now: last year 20th, this year tied for 11th. I’m guessing the fouls will drop too, and we’ll have a story if they don’t.

But we already have much more than a story, in fact a shock. The Cherries aren’t known for stopping the opposition: last year only three teams conceded more goals and no-one had a worse xGA. This year they’ve improved their goals against from 1.61/match to 1.25. They’re a quite remarkable fourth in xGA, against a balanced set of opponents (Cardiff, West Ham, Everton, Chelsea). It’d be a triple shock if they stayed that high, but let’s enjoy it while we can.

In my drive to get Callum Wilson into the England setup, I’d like to point out that he’s second in individual xG in the league, behind only Mo Salah. He’s getting into very good shooting positions, and if he continues to do so, he could conceivably be a 20-goal man.

BRIGHTON
Last week we took a look at the Seagulls’ defensive numbers, showing they’re taking a much more active approach these days. They have some interesting attacking stats too. They’ve taken only 21.2% of their shots from outside the area, an extremely low figure, easily the lowest in the league. That might be just noise, but Chris Hughton may have told them to work for better shots. (Arsene Wenger did that one year with Arsenal.)

Shots from closer in mean fewer shots blocked, and Brighton are second-best in the league in that respect, with only 18.2% of their shots blocked. The problem is that they’re not getting many shots off at all: 8.3 per game, ahead of only Huddersfield. So despite the better quality shots, their xG is only 17th in the league

BURNLEY
The defensive numbers are frightening. Before the season began, we identified opposition conversion rate as the stat to watch. Last year it was a superb 6.9%. Now it’s a horrible 17.0%. That will almost certainly come down – even the very worst teams are rarely above 14% – but Burnley’s system means they’ll always face plenty of shots. They rely on blocks and saves to keep the opposition at bay.

In that regard, blocks are at 27.4% of opposition shots versus 34.2% last year. That doesn’t seem too bad, but over the season it translates to about 38 extra potentially dangerous shots. Opposition shot accuracy is way up, from 28.2% to 41.1%. And Gareth Southgate was right: Joe Hart isn’t Nick Pope. Last year Pope ranked second in shot-stopping. Right now Hart is third from bottom. It isn’t good enough.

CARDIFF
Can Cardiff survive? The short answer: No. The longer answer: Nope. The full answer: just maybe. The Bluebirds’ numbers are surprisingly good at this point. Their xG and xGA are almost identical, which suggests they’ve been playing at roughly the same level as their opponents. And while two of their opponents have been fellow relegation candidates Huddersfield and Newcastle, the other two have been Arsenal and Bournemouth.

And so both xG and xGA are solidly mid-table. Cardiff are actually ninth in total shots. They’re just not getting them on target at the moment, and are tied for last in that category. The numbers suggest that if they start finishing their chances at a normal rate, they’re in with a real shout.

CHELSEA
Maurizio Sarri has changed things in a hurry. Chelsea are now posting Pep-type numbers in two telling categories: possession and pass-completion percentage. Whereas last year Manchester City lapped the field in those areas, this year the Blues are just slightly behind in possession, 64.7% to 65.8%, and dead even in pass completion: 89.4%.

On the surface, they’re doing fine with it. But they’re also outperforming their xG more than any other team except Watford. They’ve had a higher percentage of their shots blocked than any other side: a whopping 38.2%. And Marcos Alonso – as a full-back – should definitely not be your leader in total shots.

One more nugget. Last season, Chelsea led the league in headed goals by a large margin, with 17. This year they have zero. They have yet to score from a set-piece goal as well. It’s a weapon they’ll need if their strikers are Alvaro Morata and Olivier Giroud.

CRYSTAL PALACE
The star at Selhurst Park is Wilfried Zaha, now and hopefully forever. But a surprising co-star this season is Wayne Hennessey, who rates as the fifth-best shot-stopper in the league. He’s one of the reasons Palace are overperforming their xGA by a larger margin than any other side. Another big plus is that they’re one of only three sides not to concede a set-piece goal, especially good considering they allowed the fifth-most set-piece goals last year.

But they’re also one of only five sides not to score from a set-piece themselves. Consider the Benteke Effect. Palace have the best aerial duel percentage in the league: an excellent 58.9%. With a big man to shoot for, they’re also the second most accurate crossing side at 32.8%. So far, so good. But they’re tied for 16th in shots from set-pieces. Twenty-six players in the league have more shots from set-pieces than Benteke. Oh, and C.B. is also tied for most total shots without a goal. Argh.

EVERTON
The Marco Silva era is off to a decent start – no-one’s going to argue with seventh place – but it’s also deceptive. They’re outperforming their xG by a considerable amount, almost as much as Chelsea. In fact, they’re 16th in total shots, and that’s from a very moderate fixture list (Wolves, Southampton, Huddersfield, Bournemouth). It doesn’t help that they’ve taken a larger percentage of shots with the head than any other side, at 34.1%. That’ll come down, but they need more production all the way around.

Another problem is set-piece defence. They’ve allowed four goals via set-pieces, and no other side has allowed more than two. Say what you will about Big Sam, but Everton were tied for sixth best in that category last season. And that category matters a lot. Last year nine of the 10 worst set-piece defences finished in the bottom half. Only Leicester beat the odds – and they finished ninth.

FULHAM
Fulham came in with a reputation as a ball-possession, short-passing side. They’re most definitely living up to it. They’re fourth in both possession and pass-completion percentage, and the same clubs are ahead of them in both categories: Manchester City, Chelsea, and Liverpool. You’ll notice Spurs, Arsenal and Manchester United are all behind. Fulham are doing quite well in attack, too: tied for sixth in total shots, tied for third in shots on target.

Unfortunately you also have to play defence. They’ve allowed the fifth-most shots, and their nine goals allowed is tied with a porous Burnley, better only than West Ham and Huddersfield. They’re also fourth in total clearances, which is worrisome for a high-possession side: it means they’re having to get rid quite frequently.

It all makes for plenty of fun, for the neutral anyway. Fulham’s matches have produced 16 goals, tied with Arsenal for most in the league.

HUDDERSFIELD
The Terriers’ stats make for awful reading: last by a mile in total shots, second-worst in shots allowed, no goals from open play. It looks like reality is finally biting back.

But a closer look reveals a different story. Huddersfield have had to play both Chelsea and Manchester City, and had a sending-off against Cardiff. With only one exception, their performances have been OK. At home to Chelsea they did almost exactly the same in both stats and result as last year. At Everton their stats were no worse than last year, and the result was even better. At home to Cardiff they were pretty much level until the red card, and got away with a draw. So the rout at the Etihad – and it was a rout in every way – makes things look a lot worse than they are.

If the numbers suggest anything, it’s that the Terriers are about the same level as last year. So like last year, they’ll need some luck, some heart, and some timely goals. A result this Saturday home to Crystal Palace might be a good idea.

Ten facts about Goran Ivanisevic on his birthday, featuring friends in high places and tattoos (Tennis365)