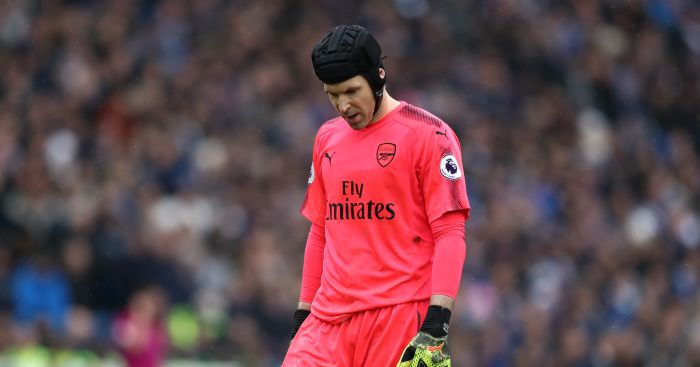 Ahead of Arsenal’s clash against BATE Borisov on Thursday evening, Petr Cech declared that winning the Europa League would be the “ideal scenario” to end his illustrious career. On this performance, the 36-year-old may want to think of other ways he can create the ultimate end to his playing days.

It was not a good night for Arsenal in the freezing conditions of Belarus, as they lost the first leg of their round-of-32 Europa League clash 1-0. Several of Unai Emery’s starting XI were off the pace as Arsenal looked dangerous going forward but allowed another defensive lapse to create their downfall.

Manchester United’s resurgence in the Premier League has seen Arsenal face extra competition for fourth place, which means the Europa League has taken on added significance, with the winners being guaranteed Champions League football next campaign. And their line-up showed they weren’t taking the knock-out stages lightly.

The Gunners weren’t far off full strength considering the players they had available to them, with Cech replacing Bernd Leno in goal, while Granit Xhaka returned to their midfield in place of Lucas Torreira. Emery’s side have actually used more players than any other team in this season’s Europa League with 28 different faces getting out on the turf. No excuses could be used here, though.

And Emery was keen pre-match to dismiss any notion that they would use the pitch or sub-zero conditions to justify a negative result in Belarus. He said: “We played against Vorskla in Kiev when it was below zero and snowing. It’s not an excuse for us, the weather or the pitch. We play 90 minutes that are the same for them and for us.”

Arsenal started in a dominant mood, with Sead Kolasinac causing all sorts of problems for the BATE rearguard on the left. Henrikh Mkhitaryan had one of the best chances of the first half when Kolasinac rolled the ball across the face of goal but the Armenian’s shot was straight at the goalkeeper from close range.

BATE fired a number of warning shots to make sure the visitors knew they weren’t just there to make up the numbers. First, Nemanja Milic nearly turned home a low cross from Igor Stasevich, before Milic, on his debut for the home side, flicked a backheel onto the post from a tight angle.

Ten attempts came and went in the first half for the north Londoners before they were hit with a punch in the guts on the stroke of half-time. Stanislav Dragun thumped a header into the net when he beat Kolasinac to the ball from a free-kick. The Bosnian, who had been showing some brilliant play going forward, simply didn’t show enough desire to get to the ball before his man. It was another example of Arsenal’s recent defensive frailties.

Matteo Guendouzi, not the only one to blame for Arsenal’s woes, looked assured and creative when making forward passes but sometimes the young Frenchman lost the ball in dangerous positions or pulled out of challenges, when maybe he should have won the ball. His midfield partner Xhaka, on the other hand – who doesn’t have the excuse of inexperience – was ineffective throughout. Just two of a number of players that didn’t step up on the night.

Arsenal came out of the blocks in the second half with Alexandre Lacazette’s 55th-minute finish ruled out for offside but they definitely didn’t have it all their own way with Cech pulling off a save from Stasevich at the other end. Xhaka and Maitland-Niles were replaced with just over 20 minutes to play by Torreira and Pierre-Emerick Aubameyang, while Denis Suarez got on the pitch to replace Kolasinac with quarter of an hour to go.

Those changes bore no fruit and the evening got worse for Arsenal as Lacazette saw red for taking his frustration out on Aleksandar Filipovic by swinging an elbow into his face. That sending off was the final nail in the coffin for the Gunners on a miserable night in Belarus.

The only player that started the match against Borisov not to be signed by Arsene Wenger was Guendouzi, which suggests the problems at the Emirates Stadium stem from further up the tree. Stan Kroenke is worth a few bucks, so maybe it’s time the owner helped Emery to reshape an ageing and severely flawed defence. A potentially lethal forward line in the shape of Lacazette and Aubameyang is great but only when you have the defensive capabilities individually, and as a team, to back it up. A reported £40million transfer budget will not be enough this summer; the Gunners will need ten times that to get back to challenging in all competitions.

Arsenal will almost certainly triumph by several goals in the second leg back at the Emirates – but that doesn’t mask the clear weaknesses that will stop them from achieving Cech’s dream ending.