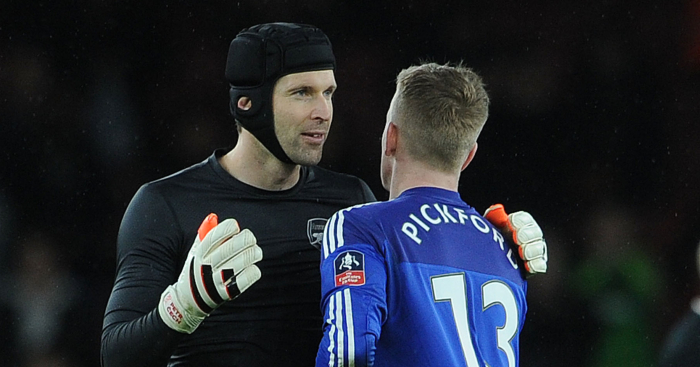 Everton and England No. 1 Jordan Pickford has offered his support to struggling Arsenal goalkeeper Petr Cech.

Cech has surprisingly started the season in goal for Arsenal, but the 36-year-old has looked largely uncomfortable as the old dog learning new tricks under new head coach Unai Emery.

Arsenal are now required to play out from defence, starting with Cech.

But the former Chelsea keeper has made at least one mistake with the ball at his feet in each of Arsenal’s first four games, and summer signing Bernd Leno must be knocking at Emery’s door and asking just what the absolute heck is occurring.

Pickford has backed Cech however, and believes any criticism of the four-time Premier League winner is misplaced.

“He’s a keeper when you’re growing up you see him making these saves week in week out, probably been the most consistent goalkeeper in these last 10 years in the Premier League, so you can’t give him too much criticism.

“I’m certainly not giving him any. I think he’s a great goalkeeper and someone you look up to.”