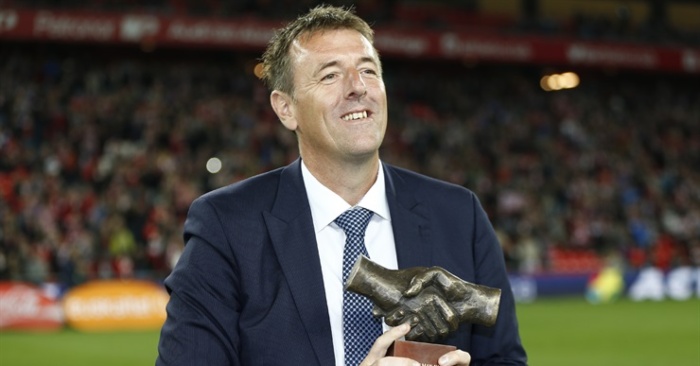 The story of how Athletic Bilbao came to play in red-and-white stripes is one of those charming tales from football’s formative years. The club, which was founded by migrated British ship builders and coal miners in 1898, had originally worn blue and white when they began playing competitively in 1902.

That changed in 1909. Club member Juan Elorduy was abroad in England and had been asked to bring back 25 Blackburn Rovers shirts on his return to the Basque country. He was unsuccessful, but he improvised – and that’s where versions of the story diverge.

Either, stood on Southampton docks waiting for his passage home, Elorduy remembered that the local team’s colours were also those of this native city or, eager not to return empty-handed, he grabbed a few fistfuls of the first football shirts he could find, before boarding his ship and heading home.

Whatever the truth, Elorduy brought 50 Southampton shirts back to Bilbao. Half of them were used by his club, the other 25 were sent south, to a team started by a pair of Basque students living in the Spanish capital; both Athletic Bilbao and Atletico Madrid have worn red and white ever since.

Athletic have a unique identity in modern football. Since 1919, in support of Bilbao’s pursuit of Basque autonomy, every player representing the club has either been born or raised in the region. Everyone knows that, even people who couldn’t name a single one of their players, and it provides Athletic – a tremendously successful club working against self-imposed limitations – with their captivating allure.

In an early chapter of his book – Edge: Leadership Secrets from Football’s Top Thinkers – Ben Lyttleton attempted to penetrate their surrounding myths. He travelled to Bilbao to find the secrets behind their sustained success and apply a more precise definition to those special Basque qualities which underwrite the club’s history.

The results were compelling, but inconclusive – as anyone seduced by mystique would have wished. Lyttleton notes the slight hesitation club figures have in discussing their operating procedure, and the result is a wink-and-smile portrayal of Athletic as a special blend of intangibles – of commitment and cohesion, locality, belonging and pride.

Today’s world is cynical, so the default will be to give short shrift to the romance within. Nevertheless, the core culture is real enough and maybe nothing demonstrates that more than their One Club Man Award.

In concept, it’s rather antiquated and probably could not exist at any other club. That’s partly because of what modern football is – all frothing tribalism and snide cynicism – but also because most clubs don’t exist in the kind of atmosphere in which recognising virtue in others would be possible.

That’s what the One Club Man Award is. Established in 2015, in the club’s own words it seeks ‘to reward players whose trajectories in a single team represent values ​​that Athletic Club considers attached to their identity’.

The first winner, with pleasing historical symmetry, was Matt Le Tissier. Paolo Maldini was recognised in 2016. In 2017, Sepp Maier – the German international goalkeeper who made over 500 appearances for Bayern Munich – was honoured and, in 2018, Barcelona totem Carles Puyol was chosen.

This year, the award was expanded. Less than a month after his death, the family of legendary Celtic defender Billy McNeill, captain of the 1967 European Cup winning side, received the trophy on his behalf. And, in a separate ceremony, Malin Moström, the long-serving midfielder for Umea and winner of over 100 caps for the Swedish women’s national team, was also honoured at San Mamés, becoming the first female recipient.

The lack of self-interest is touching. And rare. The award winners are in effect ambassadors for Athletic. All of them remained loyal to a single club throughout their careers and that’s a trait that the club are naturally keen to encourage. But it’s their more subliminal qualities that Athletic seem eager to stress and to preserve as an example to their future generations. It’s their way, perhaps, of drawing attention to something other than football’s flashing neon.

There’s a video on the club website which records Le Tissier’s visit. It shows him and his wife being met at the airport, then being taken to meet then-head coach Ernesto Valverde before being introduced to the first-team squad. From there, he’s led around San Mamés’ wood-panelled corridors, receiving a portrait-by-portrait tour of the club’s history, before being presented to the crowd during half-time of Athletic’s derby with Real Sociedad.

It’s sincere and that’s what stays with you. Le Tissier himself looks flattered and slightly overwhelmed by everything. That fits; his exceptional talent was always perfectly framed by that same lack of polish. But everyone seems so engaged and enthused by what’s happening. Even the players, who could usually be relied upon to iPhone their way through any club function, seem intrigued by what’s happening. They’re invested and interested and, although the video was presumably edited to give that impression, they appear to believe in the message at the event’s heart.

It’s reassuring to watch; it’s good to know of such an initiative’s existence. Especially now, when football exhibits such disinterest in anything which doesn’t immediately fill its pockets, or such indifference to anything which isn’t raw propaganda.

It provides a highly flattering context for Athletic Bilbao’s One Club Man Award.  There’s a self-mythologising element at work, but not to the extent that it eclipses its novelty or charm. Clubs willing to celebrate the game’s deeper texture are an increasing rarity; those who retain a Corinthian flourish are even more scarce.