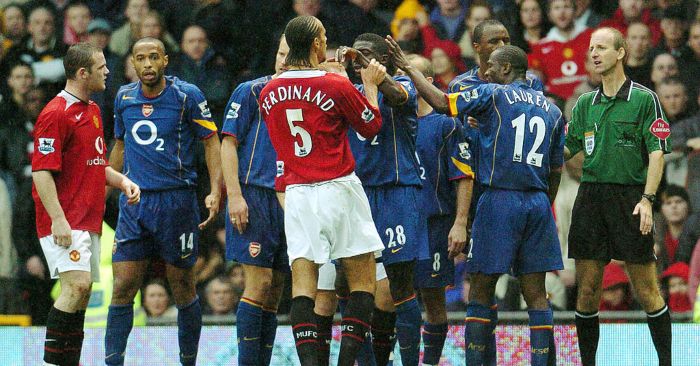 Cesc Fabregas has blamed Gary Neville and Wayne Rooney for bringing the Arsenal Invincibles’ unbeaten run to an end.

Arsenal’s sequence of 49 games without defeat remains a record in English top-flight history, and the numbers really are quite startling.

They did not lose a single league game from May 2003 to October 2004, when they were beaten 2-0 by Manchester United at Old Trafford, thanks to goals from Ruud van Nistelrooy and Rooney.

Fabregas himself played quite the role in the story of that game, and blames Neville’s rough treatment of Jose Antonio Reyes and Rooney’s dive to win a penalty for the downfall of Arsene Wenger’s Arsenal side.

“We were so disappointed,” he told Rio Ferdinand’s – the man of the match in that game – FIVE YouTube channel.

“We were angry, we were upset. It had to come to an end, the 49 games, it can happen at Old Trafford against a great Man Utd side. But I think it’s the way it happened.

“First of all, Gary Neville, what he did to Antonio Reyes… mamma mia! But every single time he had the ball! Wayne [Rooney] dived for the penalty against Sol [Campbell].

“The emotion was that we had lost against a great team, which can happen, but we didn’t feel we should’ve lost. We didn’t feel it was the right time to lose our invincible run. Everyone was really, really upset.

“What a team you were. We beat you a few times and it felt amazing but I always felt that in big games, where something really mattered, you were on top of us.

Justin Hoyte spoke about Fabregas throwing a slice of pizza at Sir Alex Ferguson in the tunnel after the Invincibles had finally been beaten, explaining that “everyone blamed Ashley Cole at the time, but it wasn’t even him”.