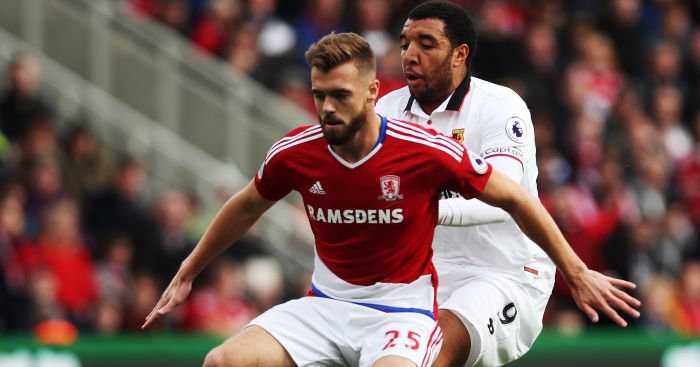 Arsenal manager Arsene Wenger is delighted with how Calum Chambers is performing for Middlesbrough this season.

Chambers was sent out on loan to the newly-promoted side with his first-team opportunities limited at the Emirates Stadium this campaign.

Wenger strengthened his defence in the summer with the arrivals of Shkodran Mustafi and Rob Holding, allowing Chambers to get some valuable experience in the Premier League.

The Gunners boss has revealed that he is pleased with Chambers – who missed Saturday’s 0-0 draw between Wenger’s side and Boro due to the loan agreement – and hopes he can keep up the improvement.

Wenger on Chambers at #mfc:"He's getting better in every single game. I'm very happy because he's a player who I feel has a huge potential."

“I watched Middlesbrough last weekend and was pleased with how Calum Chambers performed,” Wenger said in Arsenal’s matchday programme.

“He’s getting better in every single game.

“He played right-back in the last 20 minutes against Watford and he looked very good. I’m very happy because he’s a player who I feel has a huge potential, but he needed experience and Premier League games.

“In a very short time at Middlesbrough, he has become a very important player.

“They rely on him and trust him a lot, and that’s very good news for Calum first, but also for us as well.”