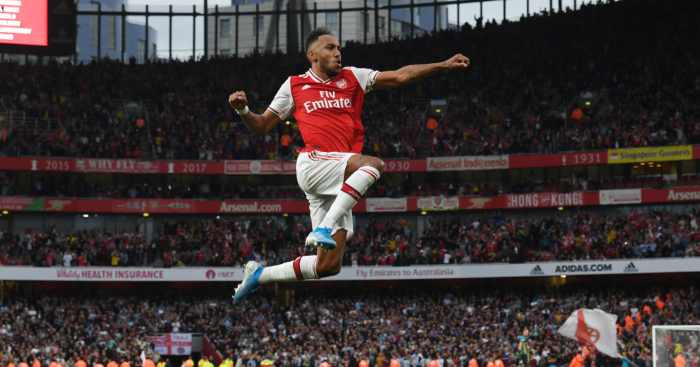 The Gunners striker hit his seventh goal in as many games this season as his late free-kick earned Unai Emery’s side a 3-2 victory over Aston Villa on Sunday.

Aubameyang has played every minute of every game so far this campaign, with the goalscoring burden increased when fellow forward Alexandre Lacazette was sidelined with an ankle injury.

At the other end of the pitch, Arsenal‘s defence has managed just one clean sheet in their last 11 Premier League games – a run spanning across the end of the last campaign and continuing into this one.

They fell behind to a John McGinn goal at the Emirates Stadium, with Ainsley Maitland-Niles’ red card before half-time only making a potential comeback harder for Arsenal.

But Nicolas Pepe’s penalty – his first goal for the club – drew them level only for Wesley to put the visitors back in front 89 seconds later.

Chambers, who replaced Bukayo Saka at the interval, would then level for a second time before Aubameyang’s 84th-minute free-kick secured the points.

Asked if there was an acceptance that Arsenal cannot keep relying on the Gabon international, Chambers replied: “Of course.

“But when you have players like that obviously it does help as well. We’re working every day in training and working on what we need to do and we’ll just keep going.

“Aubameyang’s very key. He’s a quality striker and a lot of the players on this team are quality, so to have him at the top of the team, scoring the goals is brilliant for us.”

While Aubameyang’s goals are a regular occurrence, the 30-year-old having scored 16 goals in his last 16 games, Chambers – who spent last season on loan at Fulham – had not hit the back of the net for Arsenal since August 2016 and felt he owed it to his team-mates after shouldering the blame for Villa’s second goal.

“It is my first goal for a while and it is always nice to get it,” he added.

“I felt like I needed to do something after their second goal and to get a goal myself was quite nice.

“I have said it (Villa’s goal) came from me, my touch was poor. It sort of started from me so I felt like I had to get my head right and bring something back, and bring the team back into it. Luckily I did that.”

The defeat leaves Villa in the bottom three having taken four points from their first six games back in the top-flight.

Tyrone Mings, whose error led to Chambers’ equaliser, bemoaned a lack of ruthlessness from Dean Smith’s side once they had taken the lead in north London.

“We were good at times on Sunday,” he told the club’s official website.

“But it feels like when we go ahead a bit of desperation creeps in. Instead, we should be tying to get another goal and really being ruthless.

“I don’t know what it is at the moment, but it’s something we need to change. It might be a mentality thing.”