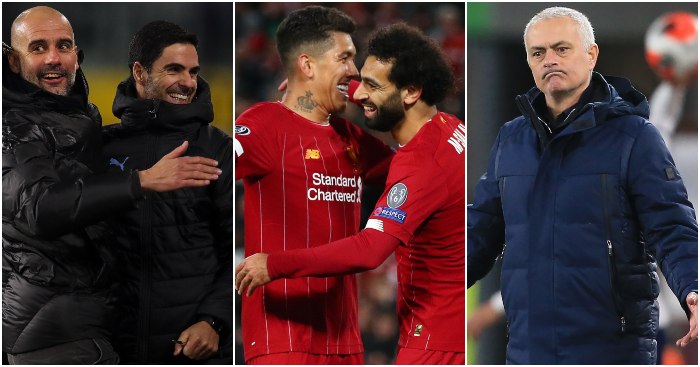 Game to watch – Manchester City v Arsenal
For anyone unable to view or stomach episode 427 of ‘One of those Anfield nights’, this Premier League clash offers a tempting alternative.

Mikel Arteta is for once the lead character as the Arsenal manager returns to the Etihad less than three months after walking out of the club he was earmarked to manage to take over one he captained. It has been a bumpy ride for the new boss at the Emirates while he gets his feet under the table, but the Gunners have ‘turned a corner’ under Arteta even with a squad that everyone knows requires an overhaul.

Arteta and the Arsenal fans will have to ride out further inconsistency but at least the north London side are looking far harder to beat. In the 15 games prior to Arteta’s arrival, they lost six and won only twice. In the same period since the Spaniard’s return to the club, Arsenal have lost only twice.

Converting that improved resilience into victories has been a problem but even that shows signs of being remedied. In the Premier League, they are unbeaten in eight games having not lost in 2020, while they have won five of their last six in all competitions, keeping four clean sheets in the process. Not a bad record for a side with barely a competent centre-back.

The mood of the two sides compared to their previous meeting – in December when Arteta sat on the City bench for the final time – is vastly different. Arteta knows City’s weaknesses better than anyone, even if the faltering champions put them on display for everyone to study at Old Trafford on Sunday.

Following their derby defeat, City owe the supporters who will trudge along to the Etihad for a slightly earlier kick-off than usual. It is not often that a Premier League result can be so simply attributed to desire and commitment but the Manchester derby was one of those rare occasions. United, as well organised as they were, evidently wanted the points more than City and they gleefully took them.

Guardiola will now be looking for a reaction against a side managed by his former protege, one which has lost fewer games than City this season. The Premier League may have gone and their lack of motivation was apparent on Sunday, but City cannot afford to remain in such a rut with Real Madrid arriving next week in what might be their last Champions League match until 2022. In that sense, Arsenal may be Guardiola’s least preferred opponents this week while he struggles to paper over the cracks Arteta knows like the back of his hand.

Team to watch – Liverpool
On the same night, 37 miles down the road, Liverpool will also be looking to right a wrong. Defeat in Madrid three weeks ago was a rare mis-step in the context of their season as a whole, but typical of their form over the last month.

Even while returning to winning ways on Saturday after consecutive defeats in the two other competitions which make up the Treble they can no longer achieve, Liverpool still struggled to convince against a Bournemouth side residing in the bottom three.

Victory was the only objective in Jurgen Klopp’s mind and one they achieved despite the Cherries creating the better opportunities to score the game’s fourth goal. But Diego Simeone will have seen enough to believe that Atletico go to Anfield at the most opportune time.

Atletico’s defensive resilience is almost a cliche these days but that doesn’t make it any less true. Only Liverpool themselves might have been seen as more difficult to break down than Simeone’s side, who will cling like a needy leech to their one-goal lead.

Of course, if there is a front three for this particular job, it would be Klopp’s. But the Reds have not only loosened up at the back in recent weeks (failing to keep a clean sheet in their last five games following a run of 11 shut-outs in the previous 13 games) but their attack has not been as potent as we have come to expect.

Still, we can expect Klopp’s side to go hunting in packs for the early goal which is likely to make all the difference in this last-16 tie. The longer Atletico keep Liverpool at bay, the tighter their grip will be on their advantage. Should the Reds breach Simeone’s rearguard in the first half – something Sevilla managed twice at the Wanda Metropolitana on Saturday – then Liverpool’s hopes of a domestic and European Double will surely be carried into the quarter-finals.

Manager to watch – Jose Mourinho
Among the many things that Mourinho has said to raise eyebrows this week is that he must prioritise one of Saturday’s trip to Burnley or tonight’s clash with RB Leipzig. Given how Spurs struggled at the weekend, we have to assume that Mourinho’s focus is on their Champions League clash in Germany.

Leipzig outclassed Spurs in almost every department at White Hart Lane three weeks ago and we’ve seen nothing since to suggest that Spurs have a realistic chance of overturning that deficit. Indeed, the draw at Burnley was the only game since that hasn’t ended in defeat for Tottenham – and it really should have. The Clarets could have been home and dry by half-time.

That was in no small part due to Mourinho’s decision to reinforce a creaking defence by playing five centre-backs. Perhaps unsurprisingly, none of the five appeared to know how they should work alongside each of the other four, and though Spurs improved after changes made at half-time, it cannot hide how disjointed they were in the opening 45 minutes.

Rather than blame his defence, Mourinho took aim at his midfield – one in particular. Tanguy Ndombele copped both barrels from the manager in his post-match interview and though much of what he said may be true, the fact that the majority of players are no longer motivated by his tough love still hasn’t dawned on Mourinho.

Which again makes his battle with Julian Nagelsmann all the more intriguing. It’s Jose’s ‘old man shouting at clouds’ style of leadership versus Nagelsmann’s more empathetic approach. The Leipzig boss once said “coaching is 30 per cent tactics and 70 per cent social competence” and the fact his players appear far more motivated by his carrot than Spurs by Mourinho’s stick highlights the dilemma the Portuguese faces: change or die.

Having lambasted Ndombele’s fitness on Saturday, it seems unlikely the record signing will feature in Mourinho’s midfield, especially one expected to spend much of Tuesday evening chasing their hosts. But we don’t know – perhaps a public rebuke was supposed to inspire Ndomble. Just like we don’t know what formation or personnel Mourinho will employ to chip into Leipzig’s lead because the manager himself is clearly struggling to suss it for himself.

Player to watch – Odion Ighalo
There was guffawing aplenty when United rushed through Ighalo’s signing on deadline day seemingly on the basis that any striker – even one who wasn’t allowed at the training ground for a fortnight – is better than no striker. But the Nigerian has shown in six weeks that he is not a competition winner.

But Ighalo clearly feels like he has won the star prize – plucked from relative obscurity to play for the team he diverted his lunch money towards watching. And that motivation has been apparent in his performances. He might not have been their first, second, third or 15th choice, but United have stumbled across a proper centre-forward.

He has shown that in his goalscoring record as well as his all-round play. United have an option to play up to and an outlet capable of retaining possession facing his own goal, a trait most evident in the control and touch which went a long way towards helping the Red Devils score their late second to rub City’s nose in it on Sunday.

Not only that, Ighalo can finish. On his first start, he scored once; on his second he netted twice. Against LASK on Thursday evening, a buoyant Ighalo will be champing at the bit to add to that tally.

We presume Ighalo will play, even though Anthony Martial has upped his game following United’s January business. Martial picked up a knock in the derby and Solskjaer has started Ighalo in United’s last two cup matches having seen enough evidence that the 30-year-old is capable of contributing to a team now buzzing with confidence.

European game to watch – PSG v Borussia Dortmund
This Champions League tie would always have been worth a glance if you fancied something more continental than what is on offer in Liverpool and Manchester on Wednesday night. But the fact it will now be played in the absence of supporters makes it an even more intriguing prospect.

Games behind closed doors are just weird. Seeing two European heavyweights slug it out in an empty arena, hearing every shout and cry from the players and coaches, is a novel experience, but one we should probably get used to. The turnstiles are locked in Italy and France and the same could apply in England very soon.

The timing could hardly be worse for PSG, who need all the help they can get in overturning a 2-1 deficit from the first leg. Marquinhos said last week that the PSG players preferred to postpone the game until such a time that supporters were able to attend but with Ligue 1 games shutting out fans until at least the middle of next month, that was never a feasible option.

The Champions League carries similar significance for Ligue 1’s runaway leaders as it does for Manchester City and though the Parisians will be back next year, defeat in their biggest game of the season in front of the fewest fans will surely mean that Thomas Tuchel won’t be around for another crack.

Football League game to watch – None
There are just five EFL matches scheduled for this midweek and not one of them is being broadcast live. Portsmouth versus Fleetwood might have been worth a look since both sides are among five teams all on the same points total, with Pompey in the last play-off spot and Joey Barton’s side just outside the top six. One point separates third from eighth.

But since it’s not on the box, you best watch Spurs in Leipzig and take a guess at which player will be next on Jose’s sh*tlist.