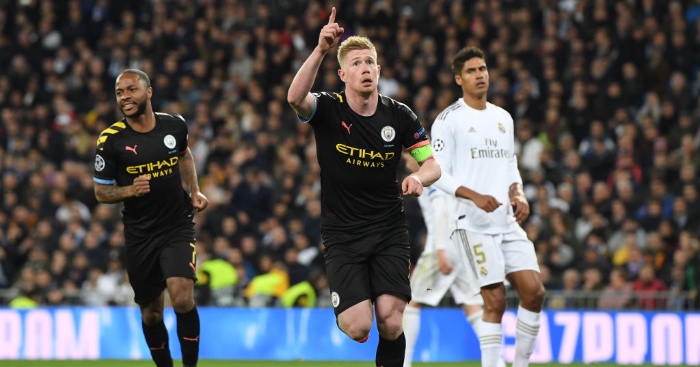 The draw has been done. Man City are in the tough half and Atalanta v Paris Saint-Germain looks like a doozy…

We’ve ranked their chances, from least fancied to our favourites.

12) Chelsea
3-0 down after the first leg at Stamford Bridge, Chelsea have got no chance. In truth, Frank Lampard would probably take a narrow loss at the Allianz Arena if it was offered to him right now.

11) Napoli
With Dries Mertens in the side, you never know. He scored a wonderful goal against Barcelona in the first leg, but Antoine Griezmann’s equaliser means Barcelona have an away goal heading into the second at the Nou Camp. And if the Frenchman can continue this sort of link-up play with Lionel Messi, Napoli are in trouble…

10) Lyon
The French side defended courageously in the first leg to take a 1-0 lead to Turin, but they were under pressure for large swathes of that game. Playing no competitive football since the start of March will surely be a disadvantage as well, particularly as Juventus’ ridiculous strength in depth means there is very little risk of burnout for them.

The first leg was one of just two times Maurizio Sarri’s side have failed to score in 42 matches, and they’ve scored 17 in the six games since. Juventus will score at home, so Lyon will have to score again. An early away goal could make it interesting, but it seems unlikely.

9) Real Madrid
They’ll have to do something pretty special at the Etihad. 2-1 down away from home against a Pep Guardiola team is never a good position to be in. That being said, the Champions League pedigree still in their team is ridiculous. If anyone could do it, it might just be them.

8) Atalanta
Gian Piero Gasperini’s side bloody love scoring goals. They scored eight in two games as they saw off Valencia in the last 16, and have hit teams for seven on three separate occasions this season. They play Paris Saint-Germain in arguably the tie of the quarter-finals. Let’s face it, Atalanta’s next game is always the one to watch.

7) RB Leipzig
They battered Tottenham across two legs in the last 16, and Julian Nagelsmann has got them playing some very entertaining football. Atletico Madrid is probably the one team they didn’t want to face. Their high press and energy-driven forwards could well be neutralised by Diego Simeone’s low block. Just ask Jurgen and his Liverpool trio. Actually don’t; they get very upset about it.

6) Juventus
Maurizio Sarri is about to win his first league title, and Juventus’ ninth in a row. But like Guardiola at Man City, the primary target this season was the Champions League. That’s why they bought Cristiano Ronaldo.

The Portuguese legend has scored just twice in the competition so far this season, which is perhaps a sign of his waning ability, but definitely a worrying sign for his opponents for the rest of the tournament. The fact that the denouement to this campaign will be played in an international tournament-style block should spell further danger for those coming up against perhaps the greatest big-game player of all time.

5) Barcelona
They should cruise past Napoli and into the quarter-finals, but they are in the far tougher side of the draw on paper. Bayern Munich await them in the quarters if they qualify, and likely Manchester City or Juventus in the semis. This is now a team that relies more heavily on Messi than ever before, and even he may struggle to carry them through consecutive games against such top quality opposition.

4) Paris Saint-Germain
Could this be their year? Probably not, they’ll likely find some way to completely f*** it up, but the draw has been kind. Atalanta, for all their attacking fervour, aren’t great at the back, and PSG have ridiculous options up front. If Neymar and Kylian Mbappe don’t get you, Mauro Icardi, Pablo Sarabia or Edinson Cavani surely will. And this season they have Idrissa Gueye, who could just prove to be a calm head amid the inevitable chaos that will ensue at some point in the remainder of their campaign.

🔴🔵 Paris have drawn their last 6 matches against Italian clubs…

That being said, we are just as likely to see Neymar sat crying, head in hands after some ridiculous culmination of events that sees them throw it away, again. And it would be funny, again.

“In the hypothetical case that the Champions League was not played for the coronavirus, than the champion was the one who beat the champion.”

That was the view of Enrique Cerezo, the Atletico Madrid president, who – without a hint of irony – was suggesting his club should be awarded the Champions League trophy if the competition could not be completed, because they beat Liverpool, who had won it the previous season. Totally sound logic that if applied to previous years would mean Shakhtar Donetsk would have been champions in a pandemic hit 2012/13 season, for beating holders Chelsea, and Benfica the beneficiaries of a global catastrophe in 2005/06, for their last-16 triumph over Liverpool.

Anyway, they are going to have to play all these darn games to win the trophy. And with that draw, they’ve got to be among the favourites. Simeone and Diego Costa chest-bumping and grimacing all the way to the final would be fun, wouldn’t it?

2) Manchester City
If Kevin de Bruyne takes control of their remaining games like he did in the first leg against Real Madrid at the Bernabeu, Man City will go all the way. He is the best midfielder in the world, and no-one will be able to handle him in that form.

The club should know by the Champions League restart whether they will again be competing next season. The Court of Arbitration for Sport (CAS) in Lausanne is expected to deliver its verdict on City’s appeal against the two-year ban on Monday. And whether a failed appeal will be a motivator or an unwanted extra burden for a team that already feel the pressure more than most in Europe, remains to be seen.

Either way, this could be their best chance.

1) Bayern Munich
They are in the tough side of the draw, but they have the best team.

They’ve scored 27 goals in seven Champions League games, taught Chelsea a lesson at Stamford Bridge and sat Spurs down for 7 (seven) hours of dictation at the Tottenham Hotspur Stadium. Robert Lewandowski is the Champions League’s top scorer with 11 (one every 48 minutes), and the next best remaining in the competition is Serge Gnabry on six (one every 78 minutes). Serious firepower.