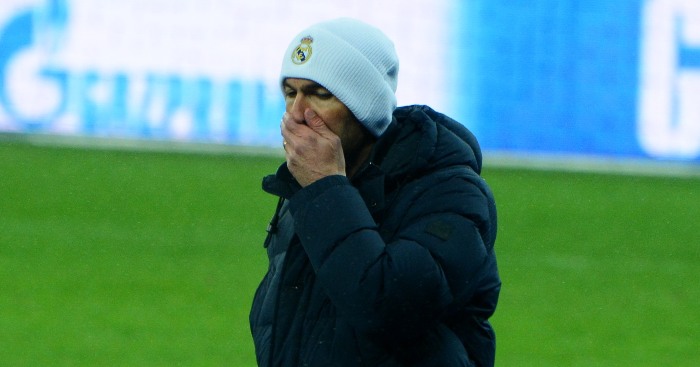 “I feel strong and as always I’m going to give everything, and so will the players. We just have to keep our chins up and focus on the next game. There’s nothing else we can do.

“I’m not going to resign, no way. We played very well in the first half but the ball didn’t want to go in the net. We’re on a bad run of results, that’s a reality, but we have to keep on going. We have one more game and we have to win it.”

Zinedine Zidane’s second stint in charge of Real Madrid is not going as planned. The three-time Champions League winner who returned to the club as saviour after the disappointments of Julen Lopetegui and Santiago Solari is now himself clinging on to his job.

His words after Real’s Champions League progress was left in the balance by a second defeat to Shakhtar Donetsk are not particularly inspiring. “We just have to keep our chins up” and “the ball didn’t want to go in the net” are empty, meaningless observations. Dare we say it, they’re a little bit…English. Zidane sounds like a manager who hopes things will get better rather than one who expects them to. More significantly, it’s not clear what, if any, plan he has to make this change beyond the keeping-up of chins and attempts to coax that recalcitrant ball into doing what it’s told.

In isolation, Tuesday’s defeat wouldn’t be a disaster. Zidane’s side were undoubtedly slightly better than in the reverse fixture. On another day, perhaps with a different ball that did want to go in the net, the result could certainly have been different. But when you’re Real Madrid, you don’t really get to point at a bit of bad luck when things are going so consistently awry game after game after game.

The problem isn’t just how bad things are currently – and they are bad, with Real a distant fourth in La Liga and outside the top two of their Champions League group with a game to play – it’s how easily and quickly things could get worse.

Madrid have taken just one point from their last three La Liga games; their next two league games are against Sevilla, one place below them with a game in hand and already safely through in the Champions League, and high-flying local rivals Atletico Madrid. Between those huge domestic tasks comes the defining Champions League clash with current group leaders Borussia Monchengladbach, who really should have won their previous meeting having led 2-0 with minutes to go.

It’s a horrible little run of games at the worst possible time. Three potentially season-defining matches. Zidane’s job on the line in every one of them. None of those three games over the coming 10 days can be sacrificed. Get the domestic games wrong and Real will find themselves cast adrift in La Liga and in all likelihood below even Barcelona. Get the Champions League game wrong and they could miss out not only on the last 16 but could even suffer the ultimate humiliation of finishing bottom and not even getting a Europa League consolation spot. It’s unthinkable that any Madrid coach could survive it.

Whatever reflex defiance might be inferred from Zidane’s insistence that he won’t resign, the fact he even has to say it is revealing and his overall demeanour and inability to turn things around suggests a man who fully expects this to get worse before it gets better. More to the point, it suggests a man who doesn’t necessarily think he’ll still be around when it does.