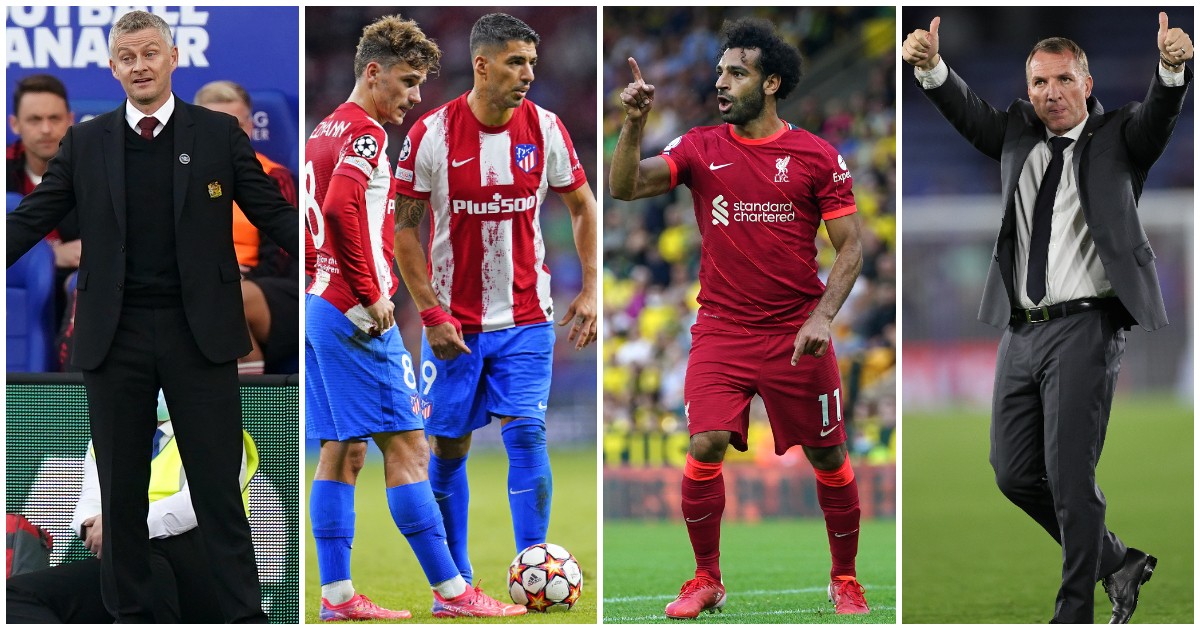 Will Ole Gunnar Solskjaer suddenly find the formula? Liverpool reunite with Luis Suarez and Leicester need a win to get started in Europe.

United’s stodginess became a full-blown crisis at the weekend when they shambled their way to a 4-2 defeat at Leicester. It was the kind of performance that often puts a manager on the dole queue and while the United players have not quite downed tools, everything from their individual body language to a collective lack of intensity told us that all is not well at Old Trafford.

“We need to look at the whole set-up and balance of the team and maybe something has to give,” Solskjaer said in response to the defeat and the sloppy manner of it. “We might have to change. Do we need more legs in there? What do we need?”

Those are questions Solskjaer must answer immediately. There seems a lack of appetite at Old Trafford to change managers, but losing their first ever clash with Atalanta on Wednesday in between the Leicester defeat and the visit of Liverpool on Sunday would put him under huge pressure.

Regardless, even a rousing victory against the Italians feels like delaying the inevitable. United veer from brilliant to biscuits like few other sides, which is a habit Solskjaer evidently cannot break. They might beat Atalanta, and Solskjaer’s history suggests he could pull a performance from nowhere to beat Liverpool, too. But progress is always fleeting with these players under the current manager. And this time, the big, morale-boosting performance Solskjaer so badly needs feels further away than it has before.

Without it, United could be back at the bottom of the table ay the halfway point of the group stage.

Johnny Nic: Man Utd are all icing under ‘just do something’ Solskjaer

Team to watch – Liverpool
In stark contrast to United, Liverpool are flying. Certainly in the Champions League, where they top Group B after opening with victories over Porto and AC Milan.

But Tuesday brings their toughest test of the group phase: a trip to Madrid to face Diego Simone’s La Liga champions.

The Reds have mixed memories of the Wanda Metropolitana. It was the site of their sixth coronation as European champions in 2019 but upon meeting the Simeone’s side a year later, it spelled the end of the defence of their crown. Indeed, Atletico have won three of their last four matches against the Reds.

Jurgen Klopp didn’t take their most recent defeat to Atletico at all well. “I don’t understand with the quality they have the football they play,” he said. “They could play proper football but they stand deep and have counter attacks.”

Simeone wasn’t rising to it ahead of this meeting – “nothing” was his reply when asked if he had a response to Klopp’s previous saltiness – with the Atletico boss instead being very complimentary towards Liverpool and their form so far this season.

Which you would expect when he is preparing to face a side who’ve scored 33 goals in their last 10 matches, with only Bayern Munich matching Liverpool for Champions League goals scored through the opening couple of Champions League matchdays. But Simeone gets his kicks from stifling attacks as potent as Liverpool and at the other end, the Atletico boss possesses one that can wreck similar havoc.

Player to watch – Luis Suarez
It won’t have escaped Suarez’s attention that Mo Salah’s current performances are prompting some hasty reassessments over the most impressive personal contribution at Anfield in recent years.

Perhaps not quite singlehandedly, Suarez almost dragged Liverpool to the Premier League title under Brendan Rodgers in 2013-14. Many at Anfield thought they might not witness the like again, especially given the importance Klopp places on the collective over the individual.

But Salah’s form this season, combined with what we know he is capable of over a sustained period, is making some reconsider that viewpoint. So you can bet that against his former club on Tuesday night, Suarez, even at 34 and with a knee problem, will be champing at the bit to give everyone a taste of what he can still do.

That was the case on the only other occasions Suarez has faced Liverpool: for Barcelona in two legs of a bat-sh*t mental semi-final in 2019 which saw him win, lose, score, assist, be booked and generally take no prisoners against the club that still reveres him.

All eyes might be on Salah right now, but don’t bet against Suarez doing something ridiculous to recapture the attention.

Game to watch – Leicester v Spartak Moscow
Chelsea and Manchester City are also in Champions League action this week, against Malmo and Club Brugge respectively. Routine examinations, you would expect, despite the Belgians surprising PSG and RB Leipzig so far this season.

So we’re going off the Champions League track and we invite you to clock off early on Wednesday for some late afternoon Europa League fun.

This is a big one for the Foxes. The weekend victory over Manchester United lifted spirits at the King Power after an underwhelming start to the season but they remain bottom of Group C, from which only one club is guaranteed passage through to the knockout stages.

At 3:30pm on Wednesday, they face a Spartak Moscow side who are the only team to beat Napoli, Serie A’s perfect leaders, since April. Another loss to follow the loss to Legia Warsaw and a draw with Napoli that felt like a defeat would waste a lot of the confidence and spirit generated from humbling United on Saturday.

Football League game to watch – Stoke v Bournemouth
There’s a full EFL programme this midweek, with the Championship action spread out over Tuesday and Wednesday, while 24 League One and Two matches take place on Tuesday night.

The Cherries’ trip to Stoke is the Sky Sports main event, with the leaders visiting the fifth-placed Potters.

Michael O’Neill’s side would be even closer to the pacesetters had they not chucked away a one-goal lead with ten minutes to go at Sheffield United at the weekend. But the Potters have been very impressive at home this term, winning seven and drawing one of their eight matches. Their last triumph on home soil inflicted upon West Brom their first defeat of the season, allowing Bournemouth to overtake the Baggies.

But Bournemouth have won their last three visits to Stoke. Another victory will turn the screw on West Brom, who go to a buoyant Swansea on Wednesday.