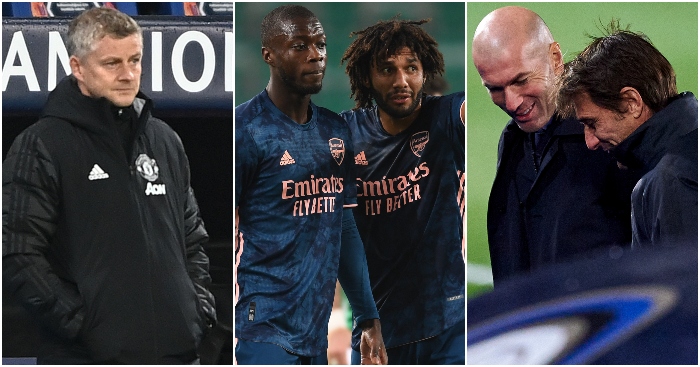 It’s a massive midweek for Ole Gunnar Solskjaer. But first…

Game to watch – Inter Milan v Real Madrid
You could be forgiven for thinking you are looking at a reflection of Group B but, no, Inter and Real are bottom and third respectively. For both of the European big boys, when they arrive at the San Siro on Wednesday, they will be entering must-win territory.

For the hosts especially, it will be very difficult to come back from a second defeat in four winless matches, a period in which they have so far shot themselves in the foot spectacularly.

Inter are propping up the group after being held by the top two, Borussia Monchengladbach and Shakhtar Donestsk, before wasting a fightback to fall late to Real in Madrid three weeks ago. Individual errors have cost them in all three games so far, twice at the back and in Donetsk in attack, and though Antonio Conte is fighting to stay positive, a home defeat to all-but-end their Champions League hopes is likely to see his temperature rise to dangerous levels.

Zinedine Zidane isn’t having to worry about what Real’s biggest rivals are doing – Barcelona are making Real look good, even if Atletico are showing them up – but that isn’t to say the coach doesn’t have problems. Had Real not eventually got the job done against Inter three weeks ago, he may have found himself out of a job. The threat of unemployment hasn’t dissipated just yet and defeat in Italy will renew the calls for change.

Zidane isn’t helped by the possible absence of two of his most senior players, Real’s top two scorers this season, and scorers in that win over Inter. Sergio Ramos is definitely out because of a hamstring twanged on international duty while Karim Benzema is 50/50. His stand-in, Luka Jovic, has got the ‘rona.

Defeat for either side won’t be terminal for their hopes of qualifying. Indeed, Real could finish the evening on top of the group. But more feasibly, they may be bottom. Tune in to see two giants potentially sh*t themselves through 90 minutes of pure Gazprom.

Team to watch – PSG
Thomas Tuchel labelled his side’s surrender to Monaco on Friday night as ‘catastrophic’. But things could get even worse for the PSG boss on Tuesday night.

Last season’s finalists find themselves in third place in Group H, three points behind both Manchester United and the visitors to the Parc des Princes, RB Leipzig. Another defeat to follow the two from their opening three games could leave PSG six points off the pace with only a couple of matches remaining.

Tuchel said his men ‘weren’t serious enough’ after going 2-0 up at Monaco before Cesc Fabregas led them a merry dance while inspiring and completing a second-half turnaround. Anything other than a swift and immediate improvement in focus and mentality will leave Tuchel’s employment prospects in a similar state to PSG’s qualification hopes.

It is a recurring problem for Tuchel and PSG. They also gave up a lead when they travelled to Leipzig in their last Champions League assignment, going down 2-1 while finishing the game with nine men.

History suggests that the return of Neymar from injury is unlikely to help PSG’s focus but both the Brazilian and Kylian Mbappe were missing when PSG went to Germany. Both will be back on Tuesday night and Mbappe already has his eye in after scoring twice against his old club before PSG packed in prematurely.

For anyone wanting to conduct their own personal scouting mission on Dayot Upamecano, this would be as good a time as any.

Player to watch – Nicolas Pepe
Pepe f*cked up on Sunday. Mikel Arteta has told him so and the Arsenal manager was in no mood to defend the club’s record signing after he was sent off at Leeds. The question now is whether Arteta gives Pepe the opportunity to atone for his mistake.

The winger will be missing for three Premier League matches as a consequence of his indiscipline at Elland Road but before his domestic ban is served, Arsenal have three Europa League games for which Pepe is eligible.

The first of which comes in the form of a visit to Norway on Thursday to face Molde. A trip to freezing Scandinavia may well feel like punishment for Pepe but if he is to be given the opportunity to show his contrition, then the winger really has to make the most of it.

Because for many Arsenal fans, his indiscretion in West Yorkshire was the final straw. If the jury was out before, Pepe’s red card prompted it to return and pass down a damning verdict on the £72million signing.

At least Pepe can start the process of winning over Arteta and the Arsenal fans in a competition in which he feels at home. He has scored twice and assisted another couple in three Europa League games this season, making it eight goal contributions in nine European matches since joining the Gunners.

Arsenal need more, much more, from Pepe in the Premier League but he will have to continue his Europa League form just to earn the chance to redeem himself domestically.

Manager to watch – Ole Gunnar Solskjaer
Manchester United toiled once more against a side prepared to sit in and defend at Old Trafford on Saturday. Three days later comes a similar test in the form of Istanbul Basaksehir, a side which has already shown up the Red Devils this season.

Defeat in Turkey two games ago left Solskjaer clinging to his job and while the subsequent win at Everton bought him some breathing space, the win over West Brom did little to convince anyone that United truly have turned a corner. Oh, except for these fools.

“This one is way below par,” said Solskjaer on Saturday night, though it wasn’t really. It was just another home game during which United struggled to break down their visitors.

What does the manager do about it now? So far, he has remained patient in the hope rather than expectation that United will start to unpick locked defences. But beyond Bruno Fernandes, the Red Devils have looked desperately short of ideas.

One option Solskjaer hasn’t tried is offering Edinson Cavani something beyond a cameo role and Tuesday night might be the ideal time to do it. While United were searching on Saturday for the opener which eventually came from a twice-taken penalty, Solskjaer shunted Anthony Martial out of his preferred central role to the left to give Cavani another half-hour taste of life in the United attack. With Martial struggling to lead it, the time has surely come for Cavani to do the job he was signed for.

Cavani won’t the only player hoping to see some action. Paul Pogba, Donny van de Beek and Dean Henderson are all hoping to get some playing time, with each one having a point to prove. Having played two holding midfielders at home to West Brom, it seems unlikely that Solskjaer will be any braver in his engine room selections but the manager has mixed it up in the Champions League this season, even if defeat in Istanbul offers United little margin for error.

Football League game to watch – Bristol City v Watford
If you prefer your midweek action with more of an EFL flavour, there are a few games to catch the eye on Tuesday and Wednesday. Championship leaders Norwich against free-scoring Stoke looks an intriguing match up but Sky Sports are showing second-placed Bournemouth versus Nottingham Forest on Tuesday.

So, instead, may we recommend Wednesday night’s offering of the Robins against the Hornets, third versus fifth. The hosts trail Norwich by only a point, while Watford are only another point further back meaning that either side could go into the weekend in pole position, depending on results elsewhere.

City have powered up the table after three wins in a row, the last of which came against Wayne Rooney’s Derby at the weekend. Their recent fine form is all the more creditable since it comes amid a Covid outbreak at the Robins’ training ground.

Watford aren’t quite so buoyant. The weekend’s 1-1 draw at QPR was their third in six games and was greeted with dismay by Vladimir Ivic. “My team can do more, much more,” said the current occupant of the Hornets hot-seat. “We need to wake up… You need to try to find the reason for this performance.”

That’s your job, Vladimir, old pal. At least until the next fella’s turn.