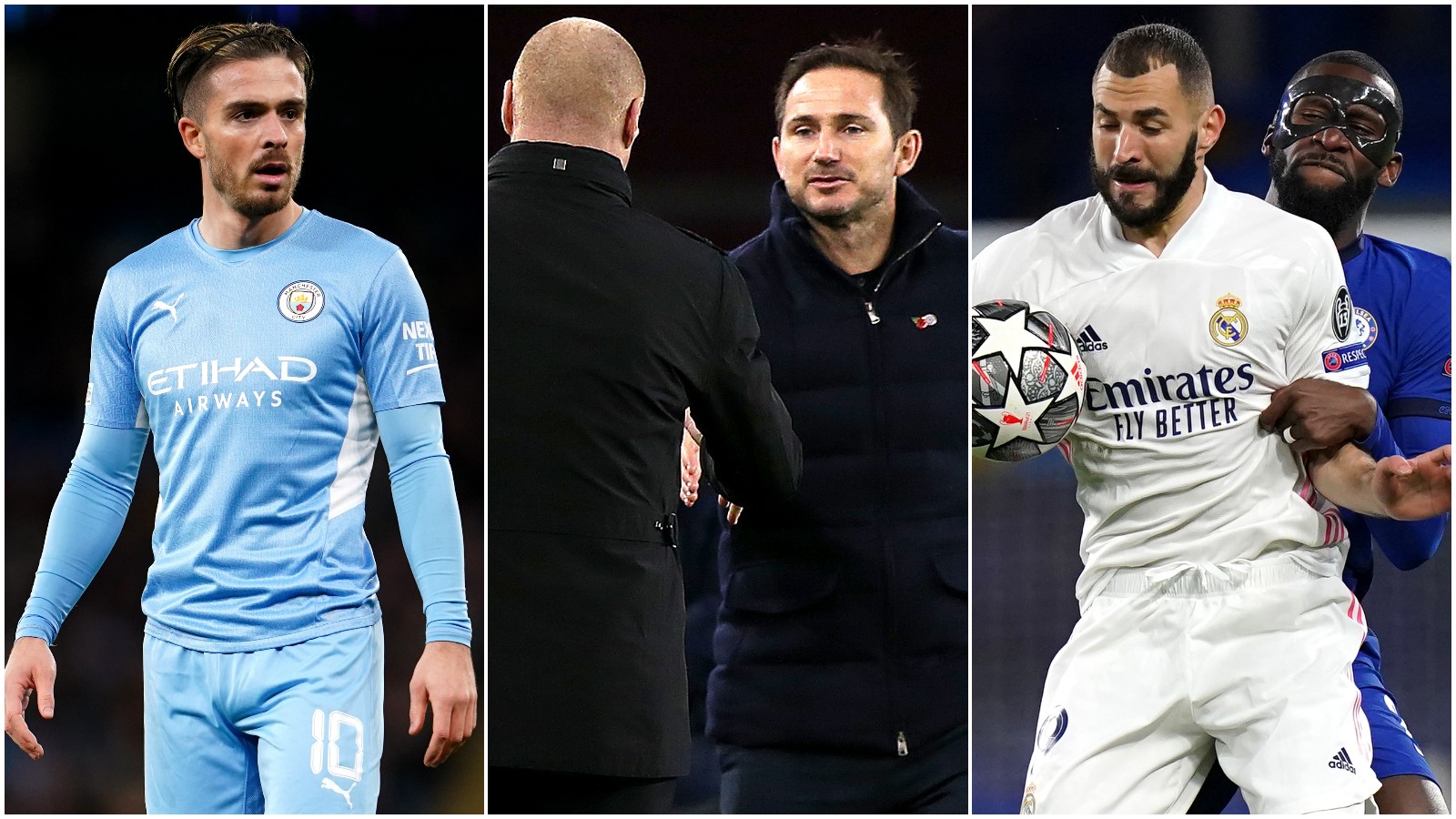 It’s a massive midweek in Europe with the Champions League and Europa League quarter-finals taking place. Plus: a Premier League six-pointer for Everton and Burnley…

Game to watch – Chelsea v Real Madrid
The holders hosting the club with the finest European pedigree of all provides the highlight of the Champions League last eight first-round clashes this week.

Despite being 12 points clear of Barcelona, Atletico and Sevilla in La Liga, Real travel to London with a point to prove. The international break was never going to be long enough to banish the memories from their Clasico humiliation a fortnight ago and Real have revenge on their minds following their defeat to the Blues at the semi-final stage last season.

It seemed like the Clasico and Wednesday’s return to Stamford Bridge were weighing down Real when they edged to a 2-1 win over Celta Vigo at the weekend when Thibaut Courtois admitted that the leaders were found wanting for “a bit of intensity” in a barely-deserved victory. “On Wednesday we cannot lack that,” he said before he goes back to his former club.

Chelsea are hardly in fine fettle themselves. The Blues are reeling from being embarrassed by Brentford on Saturday. Karim Benzema will be licking his lips if he has seen the video of the Chelsea defence being kept on strings by Ivan Toney and Bryan Mbeumo.

Thomas Tuchel has to see to it that a first defeat to the Bees in 83 years goes down as a blip, since the only defeat Chelsea had suffered in their previous 13 games was in a Carabao Cup final shoot-out against Liverpool. They endured a similar humiliation this time last season, when West Brom won 5-2 at Stamford Bridge before the quarter-final against Porto. Things turned out just fine then.

But a seething Real offer a far greater challenge than Porto. The Champions League can be their primary focus for the rest of the season and, especially after the Clasico thrashing, Florentino Perez expects…

Player to watch – Jack Grealish
Is this the week when Grealish rediscovers his bollocks?

The £100million man has made such an effort to prove himself as a team player, one capable of performing all functions Pep Guardiola expects from his players, that he seems to have forgotten what made City pay a record fee for an English player in the first place.

That’s not to say Grealish has been a failure. Far from it. Guardiola knows he can rely on Grealish as a trusted cog and the player himself is loving life under Pep’s wing: “It’s a great time to be in my shoes,” he said last week.

But against Atletico Madrid on Tuesday night, City may need the old Grealish swagger to crack Diego Simeone’s defence, one of those moments of inspiration that the attacker has yet to really produce at the Etihad.

With Atletico and Liverpool to face twice each in just a dozen days, Guardiola might not require ‘stupid tactics’ or to play with 12 players. But he does need his talisman to be talismanic rather than just another cog in the City machine.

Team to watch – Liverpool
At some point in this midweek preview, we are obliged to shoehorn in Liverpool, even if the Champions League draw has presented them with what looks like the kindest possible last-eight assignment, which makes their clash with the third-best team in Portugal not even the biggest game the Reds will play this week.

Of course, that is not the way Jurgen Klopp will assess Tuesday night’s visit to Estadio da Luz, certainly not publicly, and Benfica still need to be approached as if Liverpool were facing one of their genuine rivals the European crown.

But Liverpool have enjoyed their recent visits to Portugal. Since 2018, they have gone to Porto three times and won by an aggregate of 14-2. Really, aside from cutting off the supply line from Rafa Silva to Darwin Nunez, the only thing Liverpool need to be wary of is complacency.

The trip to the Etihad on Sunday makes such sloppiness a genuine prospect, even for these Reds. Klopp will doubtless set the tone with the strongest possible team selection, and his men should use their good fortune over the balls coming out of the bag as they would have hoped to finish the tie before a return leg next week sandwiched between meetings with City.

Manager to watch – Frank Lampard
While rampant Liverpool gear up for another big European night and a possible title-decider at City, their Merseyside rivals are fretting over a midweek visit to Burnley that could be just as decisive for Lampard and his Toffees.

Everton would be anxious about going anywhere right now. The defeat at West Ham was their sixth consecutive defeat on the road. They haven’t won away in the Premier League since the end of August. In 15 trips in all competitions, they’ve won one (luckily, away at Hull in the FA Cup) and lost 12.

Lampard would doubtless point out that their wretched run pre-dates his arrival, but he certainly hasn’t changed their fortunes. Under his leadership, Everton have lost all five away games by an aggregate score of 16-2.

Wednesday is when that run must come to an end. The Turf Moor trip is a relegation six-pointer at a time when three points looks beyond either side. Burnley have lost four on the spin, a run of games without scoring that leaves them unable to climb out of the bottom three even if they breach Everton’s porous defence.

They looked strangely subdued against City on Saturday but most would still back Burnley to find the ‘bollocks’ Lampard doubts his players possess.

At least Everton offered an improved display at West Ham even if it resulted in another 10-man defeat. “If we carry on in that vein, things will turn and we’ll be OK,” Lampard suggested. The turning point has to come at Turf Moor.

Europa League game to watch – West Ham v Lyon
The win over Sevilla in the round of 16 was billed as the biggest West Ham game since they left Upton Park – at least until the quarter-final first leg against Lyon.

Thursday’s clash serves as “the main course” to Sunday’s starter, which kept the Hammers in contention for a European place. But David Moyes admitted he was thinking about Lyon even before Everton, with what they might achieve on the continent this term taking precedence over what stage they might take next season.

Moyes can be forgiven for that, especially since they beat Everton anyway, but every Hammer has had their eye on the Lyon game since the draw was made. Get past the French side and the Irons could be going to the Nou Camp in the semi-finals.

Their European adventure sums up the transformation of West Ham under Moyes but the club should not be satisfied with what they have already accomplished. Falling at this stage, with Barcelona or Eintracht Frankfurt awaiting, would feel like something of an anticlimax. The Hammers’ story this season deserves a more fitting ending.

EFL game to watch – Middlesbrough v Fulham
If the Champions League and Premier League is a little too rich for your blood, then the Championship has you covered with a couple of televised games on both Tuesday and Wednesday evening.

One of them on Tuesday is fourth-placed Luton’s trip to rock-bottom Peterborough, which will almost certainly result in Boro needing to keep pace with the Hatters when they host leaders Fulham on Wednesday.

By Chris Wilder’s own admission, it’s a “huge week” for Boro. The Cottagers present the toughest test yet of their home winning streak which currently extends to eight Championship matches.

Aleksandar Mitrovic and Fulham have bagged 47 goals in 19 away games so far this season but Wilder has tightened up Boro to the extent they have shipped only four goals during their winning run at The Riverside. “They’ve strolled the league really while playing in second gear,” the Boro boss said of Wednesday’s opponents, but Marco Silva’s men may have to raise their game on Teesside.