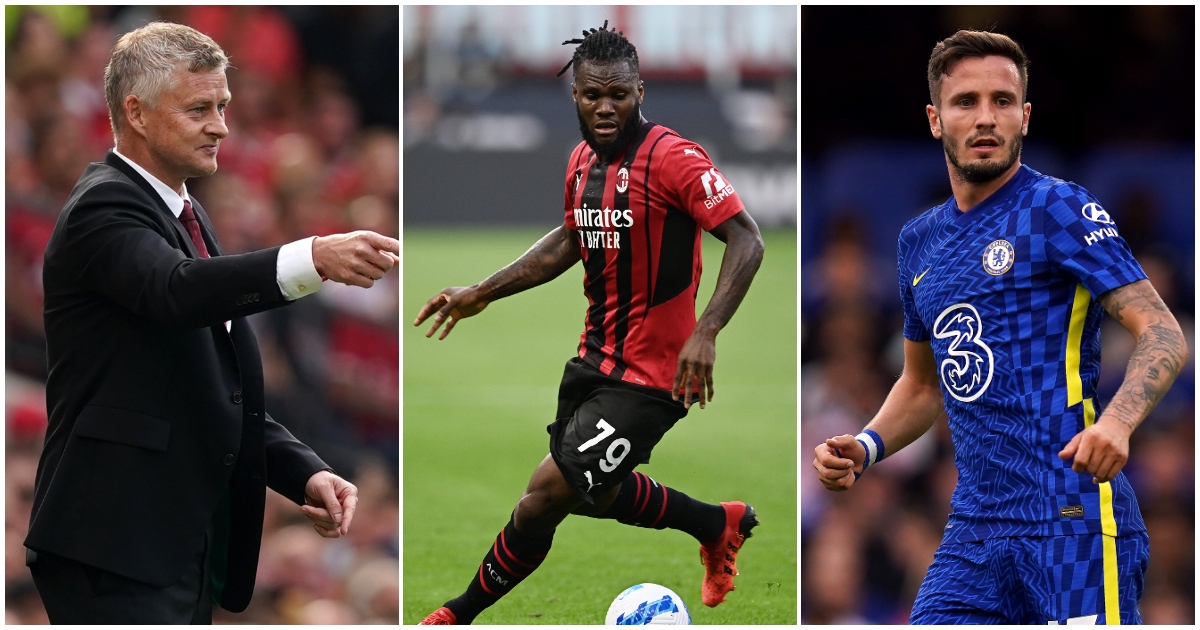 AC Milan go to Anfield for the first time with a 100 per cent record. And Saul needs to shape up sharpish…

Game to watch – Liverpool v AC Milan
Wednesday night’s Group B clash of the European Cup heavyweights represents their first meeting outside of a final. Prior to this week, Milan have never even been to Anfield.

And both sides go into a rare, mouthwatering tie in fine fettle. Liverpool brushed Leeds aside at the weekend in a game that was marred by Harvey Elliott’s injury but even that failed to take the shine off a hugely impressive performance from Jurgen Klopp’s men, despite their obvious devastation for their stricken team-mate. Thiago’s performance was one of the major positives in a sadly downbeat victory.

Milan too are in decent nick as they prepare for their first Champions League group game in seven years, which is a ridiculous absence for a club with the Rossoneri’s heritage in this competition.

Stefano Pioli’s side have retained their 100 per cent record in Serie A through their first three games, with their most recent victory coming over a Lazio side which featured three former Liverpool players – Pepe Reina, Lucas Leiva and Luis Alberto – on Sunday.

At the San Siro, Zlatan Ibrahimovic made his return from a knee injury to doing what he does best: scoring goals and breaking balls. However, he has been ruled out for Wednesday’s match with an Achilles injury, which is a real shame.

Olivier Giroud is back from Covid and could start in Ibra’s absence, plus Rafael Leao in good form. But Ibra versus Van Dijk was the battle we all wanted to see on Wednesday night, having said that, both clubs are in need of a positive start to a tough group.

Manager to watch – Ole Gunnar Solskjaer
Solskjaer takes Cristiano Ronaldo and, we assume, some other Manchester United players to Switzerland on Tuesday evening when the Red Devils will take on Young Boys for the second time in three years.

The decision Solskjaer has ahead of him before a 5:45pm kick-off on an artificial pitch is whether to maintain the momentum his team selection helped accelerate at the weekend. Against Newcastle, the United boss handed in the strongest-looking team-sheet of his reign so far, with Ronaldo, Raphael Varane and Jadon Sancho making their home debuts alongside only one holding midfielder.

There was reason enough in the 4-1 win for Solskjaer to revert to his more conservative midfield tendencies, and the manager can always point to rotation given the strength in depth at his disposal. But United fans will hope he remains brave and continues the experiment of playing Paul Pogba deeper against a side that has got off to a mixed start to the Swiss Super League season.

Ronaldo will almost certainly make his second appearance back at the club, with Edinson Cavani remaining behind in Manchester having picked up a knock in training last week. Sancho will be hoping to play off Ronaldo’s other shoulder having spent three of his four United appearances pinned to the left flank, which seems a cack-handed way to bed in your expensive new right winger.

Player to watch – Saul Niguez
Thomas Tuchel is not one to f*** about when it comes to making judgements over his players. Callum Hudson-Odoi and Tammy Abraham will vouch for that.

So Saul will be hoping he is granted a little more patience after his Premier League debut against Aston Villa. The Spain midfielder was selected to start at Stamford Bridge but 45 minutes torrid minutes led to the half-time hook and a place in our worst XI of the weekend.

What went wrong? Not being Jorginho didn’t help. But simply put, Saul couldn’t keep the ball and nor could he win it.

He won only one of nine duels he competed as John McGinn ran all over the former Atletico Madrid star, while he was dispossessed three times and completed none of the four long passes he attempted.

Saul, like any other import coming into the Premier League, deserves the opportunity to bed in for a period longer than a single half of football, and Tuchel may allow his new recruit to get his feet under the table when Zenit arrive at Stamford Bridge in a competition the seven-season Champions League veteran is far more accustomed to. Should Tuchel retain Saul in his XI, a swift improvement is mandatory.

Team to watch – Manchester City
In the interests of balance, having touched on the other Premier League representatives starting their Champions League campaigns this week, we are almost obliged to glance in City’s direction before they face RB Leipzig on Wednesday.

And there we’ll see the champions buoyant after an impressive win at Leicester that told us far more about their credentials this season than the two previous games in which they pummelled Norwich and Leicester by five goals each.

The 1-0 victory at the King Power was a clinic in control by Pep Guardiola’s side. Leicester have caused Guardiola major headaches previously, but this weekend saw a more pragmatic City side exert their quality on the Foxes, who struggled to expose any City vulnerability to the counter-attack as they have so ruthlessly before.

The clash with Leipzig, though, could be more of a parade akin to the thrashings of Norwich and Arsenal. The Germans have lost three of the opening four Bundesliga games including being thrashed 4-1 at home by Bayern Munich on Saturday evening. After that game, new coach Jesse Marsch admitted his side ‘might not be ready to face’ the Premier League champions, especially while his defence is in bits.

So it could be the perfect time for Guardiola to start Kevin De Bruyne and Phil Foden, who were both on the bench at Leicester, perhaps alongside Jack Grealish on his Champions League debut. Leipzig almost certainly aren’t ready for that.

Europa League game to watch – Leicester v Napoli
Leicester were hardly outclassed by City at the King Power on Saturday. But there is no doubt that some of Brendan Rodgers’ most influential players have yet to get their seasons going.

James Maddison looks a long way off his best, while Harvey Barnes is showing signs of rustiness on his return from injury. Neither is yet to have any involvement in a goal this season. Youri Tielemans was among the worst performers of the weekend, while at the back, Caglar Soyuncu is very obviously missing his mates, Jonny Evans and Wesley Fofana.

Handily for Rodgers, with injuries clearing up, the Leicester boss can freshen up his side for the visit of Napoli to the King Power on Thursday night. Evans, Ademola Lookman, Ryan Bertrand, Patson Daka, Boubakary Soumare and Ricardo Pereira all started on the bench against City, demonstrating the Foxes’ new-found strength in depth.

They might need it in the coming weeks. The City defeat was the first of seven games in 23 days before the next international break. And Napoli are in fine form having beaten Juventus at the weekend to maintain their 100 per cent start to the Serie A season.

Football League game to watch – Bournemouth v QPR
Chelsea face Zenit on Tuesday night, which might not get the neutrals’ balls a tingling, but at the same time, we feel obliged to point out that Barcelona are hosting Bayern Munich.

If that doesn’t get the pulse racing, firstly we’d advise you check for one. If it is simply that you prefer your football a little more Championship-y, then Sky Sports have the meeting of two undefeated sides, with neither Bournemouth nor QPR having lost in 12 games between them.

Only West Brom can also claim to be undefeated, the crucial difference being that the Cherries and R’s have drawn half their matches so far. Still, for Rangers, a draw felt like a win on Saturday since it was earned with an added-time leveller to cap a fightback from 3-1 down at Reading.

Mark Warburton has admitted he is thinking of starting all three of Charlie Austin, Lyndon Dykes and Andre Gray in his attack at Bournemouth, who at least have tightened up since Norwich put six past them in the Carabao Cup a fortnight ago.