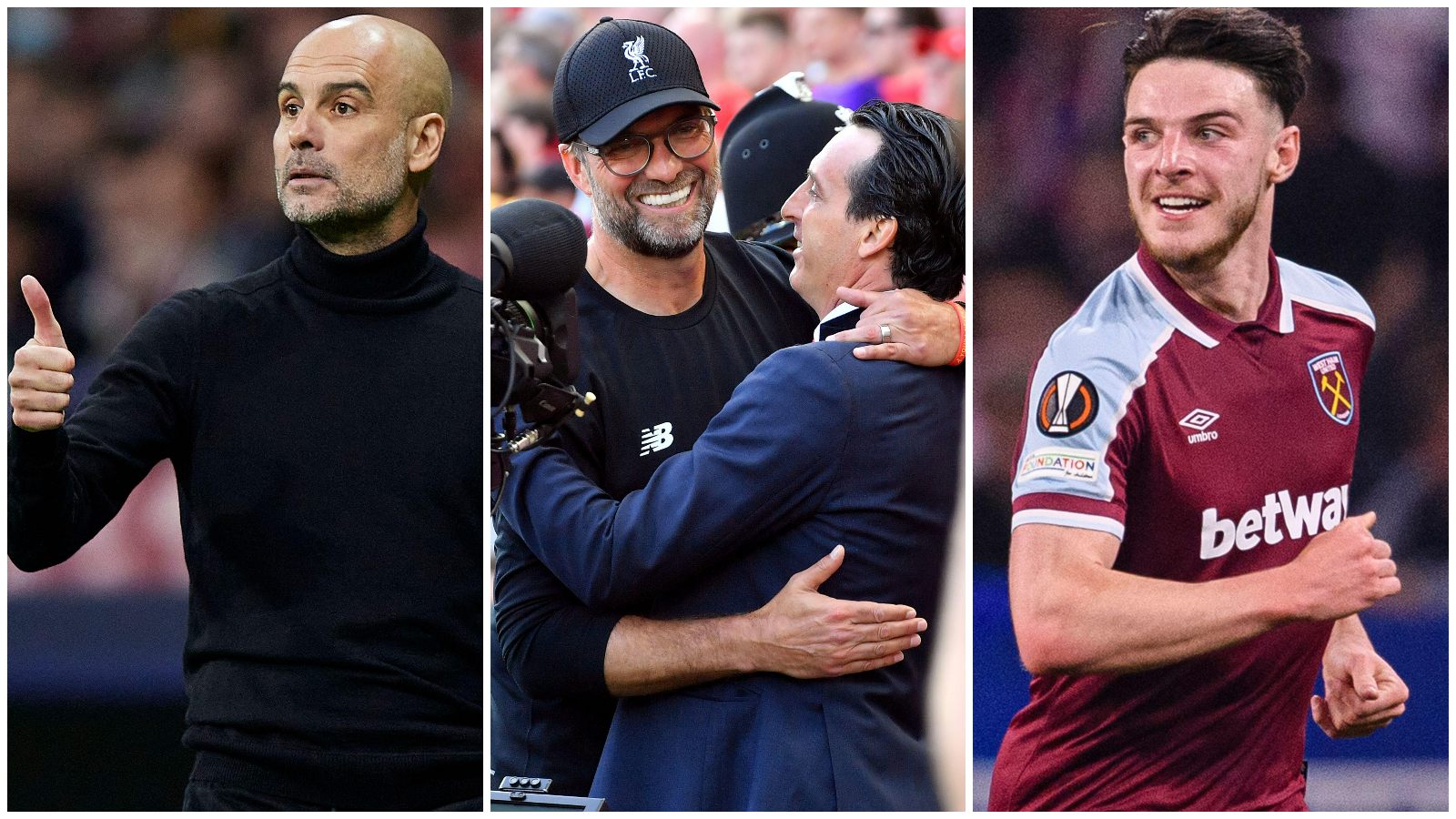 Liverpool, City, West Ham, Rangers and Leicester all play in European semi-finals this week, while Ralf Rangnick faces his latest challenge to keep biting his tongue…

The Premier League leaders’ reward for putting the Rojiblancos back in their box is another Madrid assignment – a very different one we would expect – against Real. The first leg is once again at home with a return to the Spanish capital to come next week.

While City slug it out with Liverpool at the Premier League summit, Real have La Liga all-but sewn up. But what does Pep Guardiola have to fear from Carlo Ancelotti’s side?

Real, despite being accustomed to dominating possession, will likely cede to City, as they did at PSG in the last 16 and Chelsea in the second leg of the quarter-finals. They were almost caught out in both ties, with Karim Benzema and Luka Modric having to bail out Real in thrilling ties that lacked any of the control Ancelotti might crave.

But that should be City’s greatest concern: Real’s moments. With Modric and Benzema, ably assisted by Vinicius and co, Ancelotti knows his side can strike at any time. City will have more of the ball and Pep will likely see his game plan carried out to the letter. But at any point in 180-plus minutes over the coming week, City have to be on guard for Real’s flashes of brilliance from their two old-timers.

It doesn’t help that Guardiola is mulling over a potential defensive crisis, with both first-choice full-backs set to be missing on Tuesday. Kyle Walker is injured, which hampers City’s plans to repel Real counters, while Joao Cancelo is suspended – a blow at both ends for Guardiola.

Liverpool need to maximise their sponsorship deals…but at what cost?

Team to watch – West Ham
No Nou Camp for the Hammers this season but still the biggest games in their recent history await with David Moyes’ men in their first UEFA semi for 46 years and on the cusp of a European final.

Moyes knows exactly where his priorities lie and he demonstrated such by resting Declan Rice, Jarrod Bowen, Michail Antonio and Manuel Lanzini as part of six changes at Chelsea on Sunday. He almost got away with it.

That late defeat is already forgotten, though, with Eintracht Frankfurt dominating Moyes’ mind since the Germans stormed the Nou Camp and dumped Barca out of the Europa League in the quarter-finals.

Frankfurt thrilled in Catalonia and their focus for the rest of the season is entirely on this semi and reaching the Champions League by triumphing in Seville next month. The win at Barca was their only victory in nine games while they sit snugly in mid-table in the Bundesliga.

A huge night awaits at the London Stadium, which will host only 3,000 Frankfurt fans, doubtless with thousands more looking for a way in. The same is true for Rangers; they go to Germany to face RB Leipzig in their first European semi since 2008. We are also obliged to mention Brendan v Jose when Roma go to Leicester in the Europa Conference League semi.

Player to watch – Arnaut Danjuma
Upon seeing the draw for the Champions League quarters and semis, most of us made the same mistake as Bayern Munich by looking ahead to a Liverpool v Bayern showdown in the last four. Villarreal punished the Bavarians for the presumptuousness, and you can be certain the Reds won’t make the same mistake.

The Spaniards have more than proved their credentials on the way here. They came through a tricky group containing Atalanta and Manchester United before beating Juventus prior to dumping Bayern on their backsides at the Allianz Arena.

The challenge of Liverpool is a daunting one but we know for certain that Unai Emery will have a plot for his latest meeting with Jurgen Klopp. Perhaps one similar to that Frank Lampard tried on Sunday, only more detailed and with better players to carry it out.

Villarreal saw off Juve and Bayern by playing on the counter-attack, with Danjuma one of Emery’s biggest assets. The former Bournemouth winger has scored six goals and offered one assist in 10 Champions League games since becoming Villarreal’s record signing last summer. His form has placed Danjuma ‘among the best wingers in the world’. Or at least that’s what he reckons.

And Liverpool evidently agree since they are among the Premier League big-hitters supposedly keen to sign Danjuma this summer, with Manchester United and Arsenal also linked. Anfield offers the 25-year-old the perfect shop window, and Emery will give him the platform to make the most of his chance to shine.

Manager to watch – Ralf Rangnick
Only one Premier League game in midweek and it should be a biggie – but it’s not.

When it was scheduled for Thursday night, it was probably assumed that both Manchester United and Chelsea would still have it all to play for. But no. United could yet reach the top four and Chelsea could yet slip away, but neither is even remotely likely, leaving both clubs to drift listlessly to the end of the season.

For United, it will be four long weeks, with Rangnick admitting on Saturday that their Champions League prospects are toast. So what now? The Red Devils have Chelsea and three more games, with almost everyone at Old Trafford just desperate for the season to end.

We can include Rangnick among that number, and it will be fascinating to see how the German reacts as the sweet release of May 22 creeps closer. With every abject performance he appears to be struggling to keep a lid on what he really thinks about a squad that he has been unable to effect in any tangible fashion.

Word is Rangnick has compiled a dossier of shame on this squad to pass on to Erik ten Hag but the interim manager is only human – he must be desperate to make his mark in the next month after six in which the players have refused to allow him to implement any of his ideas. You wouldn’t blame him for dousing the dressing room in petrol and tossing a match over his shoulder as he goes, but his revenge, if it comes, is sure to be somewhat more subtle.

Go on, Ralf. You get yours.

EFL game to watch – Fulham v Nottingham Forest
Forest need only a point to secure a play-off place but the Tricky Trees shouldn’t be written off yet in the race for the second automatic promotion place.

While Forest go to already-promoted Fulham on Tuesday night on the back of seven wins in eight games, Bournemouth will be at Swansea looking to steady themselves after a run of one win in five.

Forest are currently five points off the Cherries but desperate to get themselves into a position where their trip to Dean Court in the penultimate game of the season could be pivotal.

European game to watch – Bologna v Inter
It’s a huge midweek at the top of Serie A, where Inter will play their game in hand over Milan, who are currently clinging to a two-point advantage, which looked set to be lost until Sandro Tonali scored a last-gasp winner at Lazio on Sunday night.

On Wednesday, Inter will look to capitalise on the opportunity afforded to them by the postponement of their trip to Bologna at the start of the year. Then, the Bologna players were ordered into quarantine after a Covid outbreak, even if that didn’t stop Inter from turning up and trying through the courts to force a forfeit.

Instead, they will have to return to Stadio Renato Dall’Ara and earn the points the hard way. With four games left after this, it’s an opportunity the Nerazzurri can barely afford to pass up.