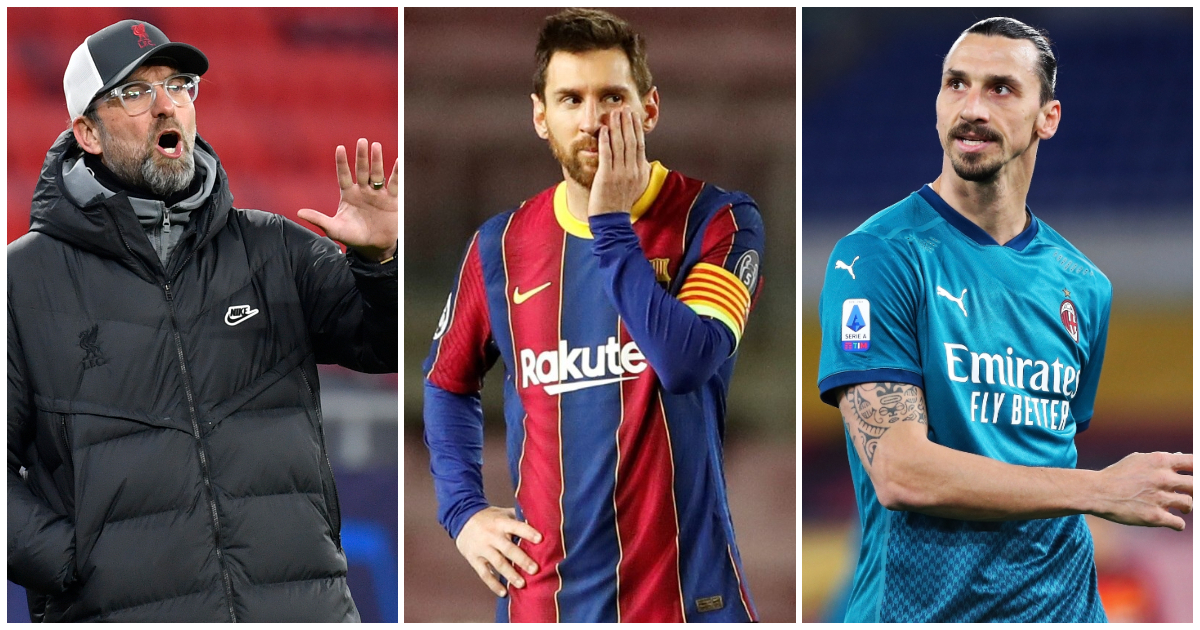 Game to watch – Man Utd v AC Milan
This sounds more like a Champions League clash than three of the four ties in the main event this week and this first Europa League meeting between England and Italy’s second-placed sides could be a Thursday night treat.

Ole Gunnar Solskjaer’s absolute head-f*** of a team go into battle with the Rossoneri on the back of ending their derby rivals’ unbeaten streak with a thoroughly deserved 2-0 win at the Etihad. Few saw it coming, especially in the wake of the turgid fare served up by the Red Devils in the three goalless games prior to the derby.

With the Premier League title out of reach, the Europa League takes on heightened significance for Solskjaer as he goes in search of his first silverware as United manager. The Norwegian says United have ‘unfinished business’ after last season’s disappointment at the semi-final stage – the fourth time Solskjaer has got to a semi and fluffed it.

For Milan, their priority remains the race for the Scudetto. They arrested their recent ropey form to sink Hellas Verona 2-0 at the weekend, a win all the more impressive given Stefano Pioli was without half of his regular starters.

One of them being Zlatan Ibrahimovic. But hope remains of seeing the former United striker go up against Harry Maguire, with Ibra hopeful of returning from a thigh injury at Old Trafford. If he fails to recover for the first leg, Zlatan should be back for the return leg in Milan next week.

Pioli is also expected to have Sandro Tonali, Theo Hernandez and Ante Rebic available for the trip to Manchester, while Ismael Bennacer, Mario Mandzukic and Hakan Calhanoglu have a couple of days to prove their fitness.

Zlatan, of course, isn’t the only familiar face United could encounter on Thursday. Diogo Dalot, on loan at Milan from United, is eligible to face his parent club and the Portuguese, once thought of as the best young right-back in Europe by Jose Mourinho, is brimming with confidence after scoring this, his first ever league goal at the weekend…

Team to watch – Liverpool
Liverpool are playing at the moment like a team who need a two-goal headstart, which is fortunately what they take with them when they return to Budapest for the second leg of their Champions League last-16 tie with RB Leipzig.

The mentality midgets are shrinking with each passing week at present, with the defeat to Fulham representing their sixth consecutive home league defeat. So Jurgen Klopp will be bloody delighted to get away from Anfield and instead call the Puskas Arena ‘home’ for a night.

There they have already beaten Julian Nagelsmann’s men three weeks ago, though it was not lost on the RB Leipzig coach that his side gifted the Reds victory with a couple of errors which were punished by Mo Salah and Sadio Mane with the kind of ruthlessness which has since deserted them.

“A lot of people were waiting for us to slip up again and tonight we didn’t,” said Klopp after that first-leg win, though the non-believers didn’t have to hang around for long. Liverpool lost their next three home games while failing to score.

Perhaps because he has already exhausted his reserves of excuses, Klopp will have none if Liverpool sink to another new low on Wednesday night. The beleaguered boss made seven changes to his XI for the Fulham defeat with Leipzig in mind, despite previously claiming that he would not prioritise the Champions League. But Klopp can hardly be blamed for focusing on the single facet of life currently offering Liverpool any joy.

Away from the Premier League, away from Anfield, with a leg up – this has to mark a turning point in Liverpool’s season.

Where Liverpool rank among the Premier League’s bad champions

Player to watch – Lionel Messi
It’s a big week for the Barcelona superstar. Messi created both goals in Saturday’s 2-0 win at Osasuna before voting the following day in Barca’s presidential elections, which he did more than most to provoke with his criticism of Josep Bartomeu when he tried to leave the club last summer. With Joan Laporta president once more and the direction of Barca somewhat more clear, attention now turns to Messi and whether he wants any part in it.

The first indication will come this week when Messi travels to Paris to face the team best placed to take him from Barca. The scrutiny of the Argentina genius will be intense, especially while Barca go chasing a 4-1 deficit from the first leg when Mauricio Pochettino’s PSG thoroughly outclassed their hosts.

Barca have demonstrated all the resilience of soggy papier-mache in recent years when the going has got tough in the Champions League and Ronald Koeman’s side will be looking to their talisman to set the tone against the side he could well join come the summer.

Another fightback to flatten PSG seems beyond this Barca side, but the onus is on the Catalans to offer at least the illusion of a fight. Messi, in good form with 25 goal involvements from 26 games this season, also has a point to prove after being horribly shown up by Kylian Mbappe at the Nou Camp.

Manager to watch – Mikel Arteta
“Obviously, we know that Thursday is a massive game for us,” said Arteta after Granit Xhaka chucked away two points in Arsenal’s 1-1 draw at Burnley. And the Gunners boss meant it – the Europa League has become Arsenal’s biggest priority this season.

Failing to beat Burnley has left Arteta’s side 12 points off the top four, with what faint hopes they may have had of making a late dash for a Champions League place – generated by their impressive recent form – effectively ended at Turf Moor.

So to the Europa League they must turn as a route into next season’s Champions League, or indeed European football of any form. Which offers Arteta something of a dilemma.

In between ties with Olympiakos over the next week, Arsenal face Tottenham in the north London derby, with another capital affair with West Ham following the second leg. There was no suggestion from his line-up at Burnley that the Premier League had been written off as an avenue to Europe, but the result may alter his thinking ahead of a huge week with tests against their biggest rivals and the side who knocked them out of Europe last season.

Premier League game to watch – Manchester City v Southampton
Sky Sports’ attempt to distract you from all of the wonderful European football taking place this week centres on a grudge match from League One and, on Wednesday, Saints’ trip to the leaders.

Both sides go into the 6pm meeting having reversed their recent form. City were cruising through a 21-match winning run before they once again came a cropper at the hand of Solskjaer and United. Pep Guardiola played it cool post-match but his agitation was clear to see as City kept running into dead ends as United saw out their win with relative ease. An immediate return to winning ways would make derby defeat no big deal in the grander scheme of City’s season. But Saints are also arriving at the Etihad in a different frame of mind…

Their mood was finally lifted by a 2-0 victory over Sheffield United on Saturday, their first win in 10 games. A haul of a single point from the previous 27 on offer to them had Saints looking nervously over their shoulder towards the drop zone, but the win at Bramall Lane eases whatever fears may have been starting to creep in.

It was achieved thanks to a sublime goal from Che Adams, who will likely stand in for the injured Danny Ings at the Etihad, and a penalty earned by rookie Nathan Tella. The former Arsenal youngster was making only his second Premier League start and he certainly did enough to keep his place and test himself against the runaway league leaders.

Football League game to watch – Portsmouth v Sunderland
Saturday was a good day for Saints fans. While they were tasting victory for the first time since January 4, Pompey’s own slump took an even sharper dive with a 4-1 defeat at Northampton.

Kenny Jackett’s men were 4-0 down at half-time to a side that started the day in the League One relegation zone. Jackett was already under pressure before their Sixfields surrender, with one win in six leaving Pompey clinging on to a play-off berth.

Sunderland are in rather more chipper mood. With a new owner, they have won five of their last six to sit snugly in fourth before they go to Fratton Park for what has become something of a grudge game in recent seasons. Familiarity, in the play-offs and the EFL Trophy, has certainly bred contempt and for the hosts, this is a must-win encounter before they return to Wembley on Saturday for last year’s Papa John’s Trophy – a title Sunderland could take from them within 24 hours.