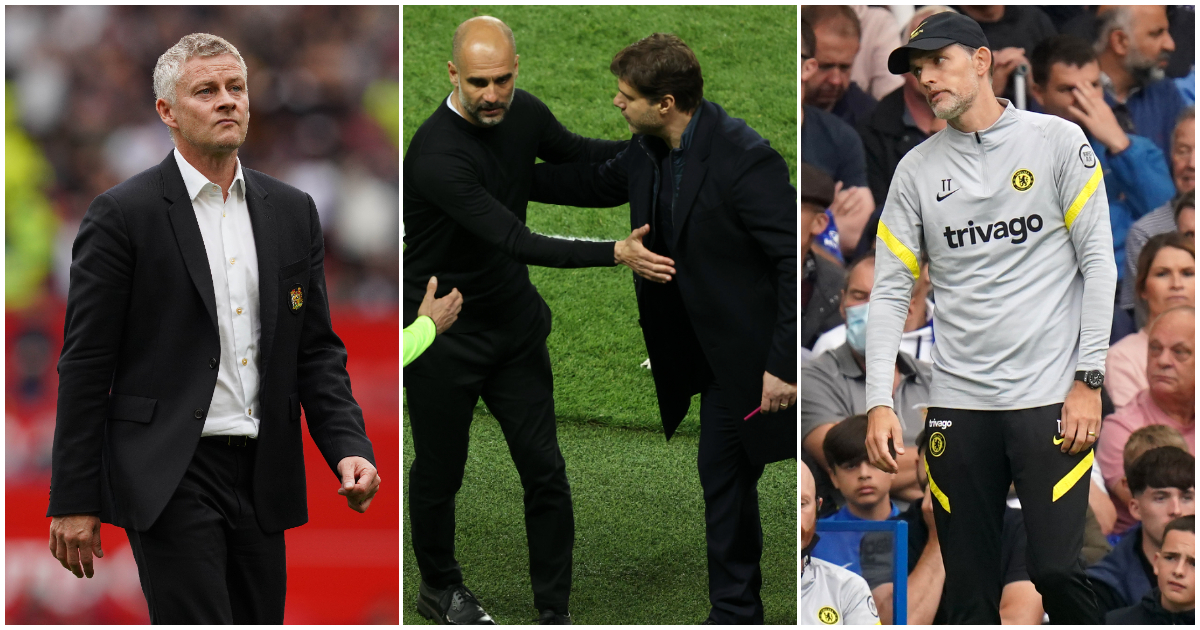 Man City go to PSG in the middle of surely the most testing week of the season. Also: it’s a biggie for Tactics Tom and the PE teacher in charge of Man Utd…

Game to watch – PSG v Manchester City
Amid the glitz, glamour and expectation, a stench of desperation will hang over the Parc Des Princes on Tuesday, when the two sides most eager to win the Champions League meet again in Paris.

Domestic domination is never going to be enough for either side in the Petrodollar Derby, with City and PSG bloodying the noses of the traditional powerhouses in recent years, only for each to fall at the final hurdle in the last couple of seasons. This year has to be different for both.

Of course, there are no titles on offer on Tuesday night but this meeting allows both sides to make a statement of intent in Group A, especially the hosts after they were held at Club Brugge on the opening matchday.

That was the only game PSG haven’t won this season, otherwise Mauricio Pochettino’s men have been perfect through eight Ligue 1 matches – in terms of results at least. There remain plenty of issues for Pochettino to resolve, and the Champions League offers PSG the best barometer.

City preyed on Chelsea’s weaknesses at the weekend to inflict upon the European champions their first defeat of the season and Pep Guardiola will find a number of vulnerabilities to expose when he takes his side to the French capital for the second time this year. The first meeting, in the semi-final last season, saw PSG dominate the first half before City took control of the second period and, by scoring twice, the tie as a whole.

Pochettino’s most immediate concern is shoehorning Lionel Messi into a forward line already featuring Kylian Mbappe and Neymar while making it function as a cohesive unit. Which sounds laughable when you consider the quality of the trio but Messi is yet to score for PSG and there is very much a sense that the forward line requires more refining than simply chucking three megastars into the same XI.

Messi is training once more after a knee problem but Pochettino might not be so concerned if the megastar doesn’t make it. Presumably that would suit Pep Guardiola too.

Especially while the boss finds himself in the midst of arguably the most testing week of City’s season. They passed the first examination with flying colours, controlling Champions League winners Chelsea on their own patch. After PSG, they go to Liverpool on Sunday. Will any side in Europe have a tougher week all season?

Team to watch – Chelsea
Thomas Tuchel knew where his Chelsea side faltered against City on Saturday. The Premier League champions may have made the Champions League winners ‘underperform’ with their most impressive performance for some time, but the Blues still fell short in areas they could control.

Their defence dropped too deep, sucking in the three defensive midfielders, leaving Romelu Lukaku and Timo Werner so stranded that at some points they were barely visible to the naked eye on the few occasions Jorginho and co were allowed to play with their heads up.

It was a poor performance and a badly-timed off-day. Was it one to be worried about in a wider context than that one matchday? Probably not. But things can unravel quickly at Chelsea, and the same has happened in Tuchel’s past, so a swift response is required on Tuesday night when the holders go to Turin.

There they’ll meet a Juventus side picking themselves up after a woeful start to the season that left them in 18th place barely a week ago. Two 3-2 victories have lifted the mood slightly and taken them into the top half of the table but injuries to Paulo Dybala and former Chelsea striker Alvaro Morata before this Champions League test and the weekend’s Turin derby have given Max Allegri even more to ponder.

There is no question Chelsea’s best would be too much for this Juve side. It is up to Tuchel how he prompts that necessary and swift improvement after a dispiriting weekend.

This week, the charge is harder to deny. United have lost three of their last four matches, twice at home, while their win came as a result of Mark Noble’s last-gasp penalty miss.

United shot themselves in both feet in the first of those defeats at Young Boys and last Wednesday’s Carabao Cup exit to West Ham could be attributed to a less-than-full-strength XI. But losing to Villa on Saturday was more of worry because the defeat exhibited many of the same symptoms that have caused United’s ills over the last couple of years.

United had more of the ball, but never control of the game. They attempted far more shots but Villa had the better chances. It was no smash-and-grab on Villa’s part; they were good value for their victory.

Solskjaer hasn’t been able to cure these ailments in the past and it is unlikely he will suddenly find the answers before Wednesday. Especially with Villarreal coming to Old Trafford, the team who denied Solskjaer his first trophy in May with the kind of game plan the United boss can’t seem to crack: defend deep, soak up the pressure, then hit a poorly-protected defence on the break.

Player to watch – Harry Kane
Under normal circumstances, Kane might reasonably expect the night off if Tottenham are hosting the fifth-placed side in Slovenia, a club with a stadium capacity lower than most League Two clubs. But the visit of Mura in the European Papa John’s allows Kane the opportunity to play himself into something that might resemble form.

Kane is far from Nuno’s only worry. The manager himself you could argue is part of the problem at Tottenham these days but Kane’s performances are so far below the level we might reasonably expect of the England captain, it makes little sense to rest him when he hardly rushed back after an extended summer break.

Ian King:  The downward spiral of Tottenham Hotspur is starting to look unfixable

Nuno’s system isn’t working and the opportunity to refine it in a vaguely-competitive setting should be a higher priority right now than worrying about fatigue in players who showed barely any willingness to run at the Emirates on Sunday.

Putting six or seven past Mura won’t remedy any of Spurs’ many problems, and the chance that doesn’t happen might be enough to make Nuno wary of going balls-out against the Slovenians. But Tottenham need a performance to begin to be able to move the derby disaster towards the darker corners of their memories. And no player, perhaps with the discreditable exception of Dele Alli, needs it more than Kane.

Football League game to watch – Huddersfield v Blackburn
If PSG v City isn’t to your taste and Porto against Liverpool doesn’t tickle you either then you can take your pick of any of six Championship matches on Tuesday night.

Huddersfield host a buoyant Rovers side looking to put a six-point gap between themselves and Winty’s boys. Rovers force-fed another 365-er a hefty slice of humble pie while maintaining a place in the top six by battering Cardiff 5-1 at the weekend, inspired by a hat-trick from Chile’s favourite son, Ben Brereton Diaz.

In fairness to Nathan Spafford, no one expected this from Rovers this season. Tony Mowbray’s side have suffered only one defeat in nine games while displaying a surprising number of strings to their bow. They have out-fought opponents and, like on Cardiff on Saturday, Rovers have out-thought them too.

Town are on a different trend having lost their last two games to Nottingham Forest and Swansea and three of their last four. Another defeat could leave them entrenched in mid-table and desperately searching for come creativity.