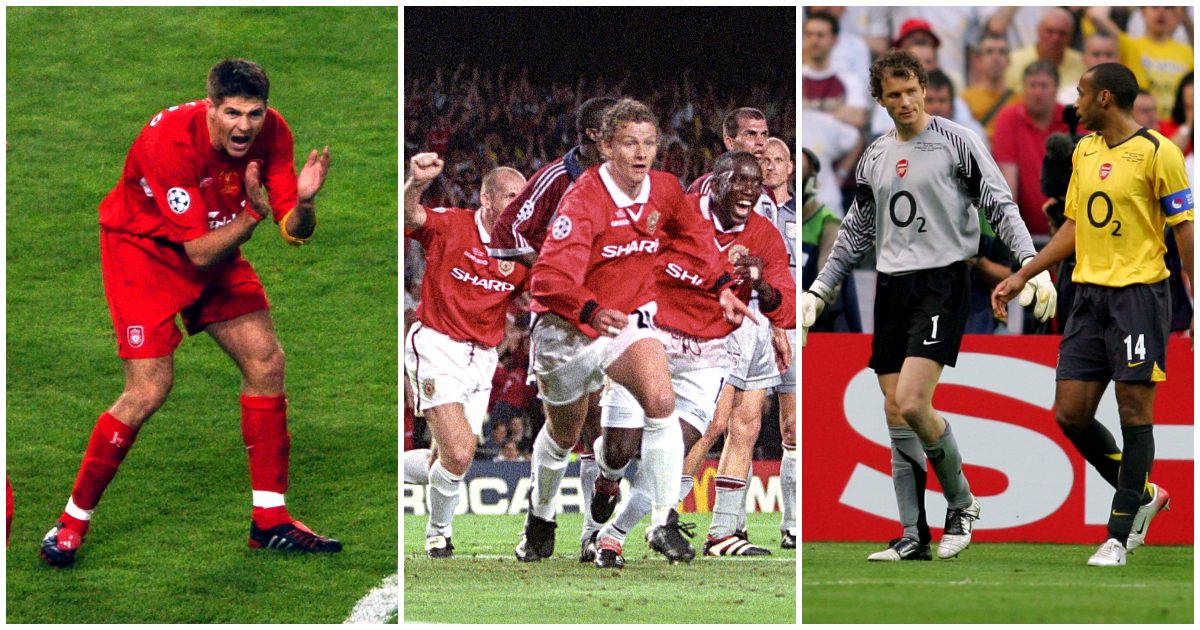 At the top is a Champions League final performance for which one of its stars admits they ‘never turned up’. Where will City v Chelsea enter the rundown?

‘The feathery touch of Barcelona left Manchester United bruised and beaten. It is as well that the victors’ good taste extended to winning by a modest margin. The holders were relieved of the European Cup and must take what comfort there is in the appreciation that there is no shame in being outclassed. They could barely engage with Pep Guardiola’s side, let alone menace them.’

The intro to Kevin McCarra’s dispatch from Rome for The Guardian summed up United’s embarrassment. The Red Devils mastered Frank Rijkaard’s Barca the previous season but Guardiola – in his rookie season as coach – had elevated the Catalans way above United’s level. And how it showed.

They started reasonably well but never did they test a Barca back four featuring Yaya Toure at centre-back, helping to cover the voids left by Eric Abidal, Rafa Marquez and Dani Alves. Ferguson’s side were in pursuit of a fourth trophy of the season but spent the night chasing shadows, especially after a towering header from *checks notes* Lionel Messi made the final 20 minutes a victory procession.

At least United responded this time to going behind. But that was merely Barca’s way of toying with the Premier League champions. Guardiola’s side could have been three up at half-time when United clung to the illusion of parity offered by the scoreline.

Messi and David Villa belatedly killed off United, who failed to win a single corner while being out-shot 19-4.

10) Liverpool 2007
After the drama of their meeting in the 2005 final, neither Liverpool or Milan could be blamed for their pragmatism in Athens.

Milan claimed a revenge of sorts with two goals from Pipoo Inzhagi, the first a deflection more than a finish while the second was created by Kaka, who thrived in the space vacated by Javier Mascherano, with Rafa Benitez having sacrificed his defensive screener while chasing the game in the final 10 minutes.

Liverpool threatened a fightback in the final moments after Dirk Kuyt halved the deficit but on this occasion, Milan clung to their arses for just long enough to see the job through.

9) Liverpool 2018
Liverpool could have been 1970 Brazil reincarnated but it wouldn’t have mattered while their keeper was going peak Karius.

Nor did it help that their best player was Ramosed after half an hour. Prior to that, Liverpool were the better team. But the sight of Mo Salah being murdered in cold blood ‘shocked’ the Reds, as Jurgen Klopp admitted.

Salah’s injury turned the momentum of the Kiev clash. Yet still it took two inexplicable goalkeeping errors and one of the all-time great goals to knock the Reds down. Even after Karius’s first brain fart, Liverpool recovered quickly – within four minutes Sadio Mane levelled. They responded well to Gareth Bale’s stupendous bicycle-kick. But there was no coming back after their keeper’s margarine mitts allowed Real a third.

‘That they were the better side for most of the game will be scant consolation, particularly in defeat to the better side for most of the season. That they stood under the brightest possible spotlight for 90 minutes and did not look overwhelmed by or fearful of such a huge occasion is reason to be proud. Liverpool just boasted and bought the killer instinct that their opponents lacked at both ends.’

Spurs perhaps exhausted all their luck while reaching their first European Cup final and fell victim to the previous season’s runners-up. They dominated possession (65% – 35%) and had chances, but Son Heung-min, Lucas Moura and Christian Eriksen were all denied by Alisson while Harry Kane looked as rusty as you would expect of a player who hadn’t played for almost two months.

Spurs certainly didn’t disgrace themselves. They saved that for the following season.

7) Liverpool 2019
The Reds’ crowning glory of a remarkable season of sustained brilliance came after one of their most subdued performances of the campaign.

Klopp’s side thrilled on the road to Madrid but once there, they got the job done with goals at the very start and end of a lacklustre encounter. In between Mo Salah’s penalty and Divock Origi’s 87th-minute settler, Klopp’s men were far more pragmatic than we expected they might be or thought they could be.

Not that Klopp gave a shiny sh*te about the uncharacteristic absence of adventure. This was his first win in three Champions League final attempts and the first time Liverpool lifted silverware on his watch.

6) Arsenal 2006
Arsenal played in Paris for all but 18 minutes with 10 men and they might have got away with it if wasn’t for that meddling Helsingborgs-bound 34-year-old.

Jens Lehmann was sent off early on for hauling down Samuel Eto’o as the Barca striker rounded the Arsenal stopper. But Mad Jens isn’t one to hold a grudge. Oh, wait… “The Barcelona players demanded that I get a red card. I will remember what Barcelona did to me and take that memory with me to my grave.”

The Gunners did their very best to make Lehmann’s dismissal inconsequential. They led at half-time through Sol Campbell’s header, an advantage they retained as the final quarter of an hour arrived. But Larsson, dispatched from Rijkaard’s bench, laid on two goals in four minutes for Eto’o and fellow substitute Juliano Belletti.

Prior to Larsson’s arrival, it wasn’t as though Arsenal were desperately hanging on. They were dangerous on the break, with Alexander Hleb and Freddie Ljungberg going close to doubling their lead before Thierry Henry squandered the best chance of all. Had Henry buried his chance instead of allowing Victor Valdes to save, Arsenal would surely have won their first European Cup and Barca would have struggled to find any injustice.

5) Chelsea 2008
There was barely a cat’s c*ck hair between Chelsea and United through 120 minutes and penalties in the Moscow rain.

Chelsea recovered from going behind and after the break, they were the better side, presumably inspired by a Churchillian battle cry by Avram Grant.

The Blues hit the post through Frank Lampard and Didier Drogba before the centre-forward took himself off Grant’s list of penalty-takers by slapping Nemanja Vidic towards the end of extra-time. Then came the shoot-out. Were it not for John Terry’s choice of carpet slippers over a screw-in stud, Grant would have been a European champion.

4) Manchester United 2008
But United could mount a similar argument to Chelsea.

Prior to Lampard’s lucky leveller, the Premier League champions were the better side. Chelsea rallied, but United could have won it inside 120 minutes, with Ryan Giggs having a shot cleared off the line, while Carlos Tevez and Michael Carrick were denied by Petr Cech in quick succession.

It all worked out swell in the end…

On this day 11 years ago, the last all-English Champions League final ended in tears for John Terry😢

Bayern Munich had 35 shots on their patch, with Arjen Robben having 15 of them, six more than the Chelsea team managed. But the ‘hosts’ were wasteful. Only eight of their shots tested Cech, while none of their 15 crosses from the right found a Bayern man.

The beauty in Chelsea’s performance was to be found in their resilience. They blocked more shots than any other Champions League game that season, while more than half of Bayern’s efforts came from outside the penalty area as Chelsea defended their box resolutely.

Ashley Cole, Gary Cahill and Cech were among Chelsea’s best performers on the night and Juan Mata covered more ground than any other player. Lovely Juan, for God’s sake. Their 88th-minute equaliser came from their first and only corner of the night. Bayern had 20, fat lot of good it did them.

2) Liverpool 2005
Were Milan so awesome in the first half or was it that Liverpool were so appallingly bad? It matters not. But a 3-0 half-time scoreline flattered no-one in white on the night.

Then the miracle of Istanbul unfolded. Liverpool scored three goals in six minutes to recover a seemingly insurmountable deficit. Steven Gerrard’s header was a spirit lifter, but the Reds really began to believe when Dida first fumbled in Vladimir Smicer’s shot before Xabi Alonso was allowed a second go after his penalty kick rebounded to him off the Milan keeper.

If Liverpool needed confirmation that it was their night, it came when Jerzy Dudek denied Andriy Shevchenko from 0.427 yards. Because by then, Milan had reclaimed the ascendancy. But they appeared too shellshocked to do anything with it, which remained the case when Shevchenko stepped up in the shoot-out.

The Reds were lucky; Milan were criminally complacent. But only in Lombardy will you find anyone to give a sh*t.

“I hate to say it, but the occasion got to us a bit. We never turned up for the final. To be honest, I was sh*t that night”

Ryan Giggs summed it up. United were far from their flowing best, but nor where Bayern. The Germans scored an early goal – a horror from a United perspective – and sat back to defend it. The fact they hit the post and crossbar while forcing Peter Schmeichel into a couple of decent saves in the later stages plays into the narrative that Bayern were the better team.

But United, missing Roy Keane and Paul Scholes, had to commit men forward and though they were perhaps fortunate not to be sucker-punched, Sir Alex Ferguson’s side could have considered themselves unfortunate losers, had they not done the barely believable in the added time.  They had 61% of the possession, had more shots, more shots on target and passed more accurately than Bayern.

Expected goals wasn’t a thing in 1999 – it was a simpler time – but the retrospective xG 1.54 – 2.26 suggests the score-line was a fair reflection on a game which saw United make history.