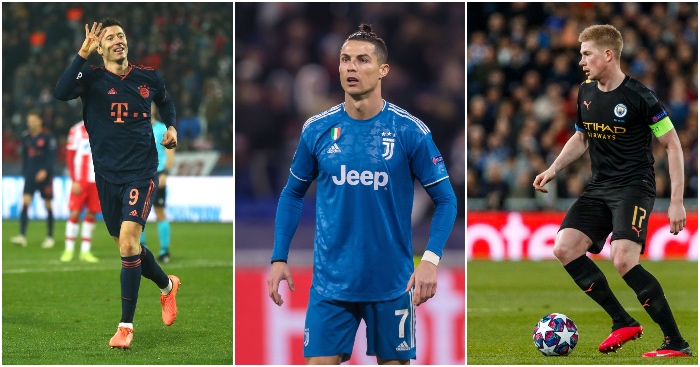 It was another ‘one of those memorable nights’ at Anfield last time out in the Champions League. It was almost five months ago. Liverpool had 34 shots, 72 per cent possession and The Kopp – packed to the rafters – was sucking the wrong team’s balls into the net. The holders and favourites are out and four last-16 ties remain to see who will take part in the mini knockout tournament starting in Lisbon on Wednesday. We look at where they all stand.

What happened in the first leg?
Juventus had 64 per cent possession but did very little with it. They had no shots on target as Lyon beat the Italian giants for the first time in their history. Liverpool and Manchester City linked Houssem Aouar was a thorn in Juve’s side and it was his run and cross that allowed Lucas Toussart to shin one past Wojciech Szczesny to give Lyon the slim advantage.

Chances of progression
Lyon will be confident having kept a clean sheet in the first leg, but they will almost certainly have to score again to progress. Juventus have failed to score at home just once this season, in the Copa Italia semi-final against AC Milan in which 0-0 was enough to see them progress on away goals anyway. But pressure can do funny things. With the Champions League the only real barometer of success for Maurizio Sarri with a ninth consecutive Serie A title met with little more than a shrug of the shoulders, the burden of a 24-year wait for European glory could prove to be too much.

Form since the restart
Juventus won just six of their remaining 12 league games as they stumbled to the title and lost the Copa Italia final on penalties to Napoli. Lyon have played just one competitive fixture with the French league season abandoned; they lost the French Cup final to PSG on penalties.

Key battle: Cristiano Ronaldo v Anthony Lopes.
Another ludicrously prolific season in Serie A – 31 goals in 33 games – makes Ronaldo’s inability to find the net in the Champions League all the more perplexing. But while two goals in seven European appearances could be deemed a sign of decline for a mere mortal, in Ronaldo’s case it’s more likely to be a dangerous omen – he’s saving them all up, isn’t he? His compatriot, Anthony Lopes, will have to be on his mettle to deny Ronaldo a return to Lisbon for the mini tournament denouement. Once he’s there you’d be a fool to bet against him going all the way. This is his competition, after all.

What happened in the first leg?
The game can be summed up by Luka Modric losing ground on Kevin De Bruyne as he surged towards Thibaut Courtouis’ goal to create yet another Manchester City chance. Real Madrid looked tired and cumbersome against a City side full of verve, hell-bent in their pursuit of the one trophy that has alluded them. Other than a brief 15 minute spell in the second half which saw Isco give Madrid the lead and Fernandinho block a couple of half chances, Manchester City dominated at the Bernabeu. Gabriel Jesus drew City level after a wonderful cross from De Bruyne, who then converted from the spot after Raheem Sterling was brought down to give them the lead.

Chances of progression
The Madrid fans’ hands must have been twitching towards the white hankies in their pockets as Sergio Ramos was sent off late on at the Bernabeu, for the 26th time in his Real Madrid career. His absence increases the incline of an uphill slog for Real Madrid at the Etihad, but an early goal will set the City nerves jangling. Will it be another tactical masterclass from Guardiola? Or will his overactive mind be their undoing once again?

Form since the restart
Real Madrid won ten on the bounce to secure the La Liga title, conceding just four goals in the process. City won seven of their remaining nine Premier League games as they ceded the title to Liverpool; they hit teams for five on four of those occasions. City score sh*tloads and Real Madrid don’t let many in, but both managers will be hoping it’s their relative weaknesses that prove to be strengths on Friday evening.

Key battle: Kevin De Bruyne v Casemiro
Real Madrid need goals but they need to prioritise stopping City or the hosts could be out of sight before they get a foothold in the game. It’s not as simple as stop De Bruyne, stop City, but it’s a good place to start. His teammates feed off his energy as well as his passing and all-round play. It may take more than one man to shackle him, but a frustrated De Bruyne is the key for Real Madrid, and Casemiro will be the leading haranguer.

What happened in the first leg?
Two brilliant goals. The first: a quick counter-attack from Napoli ending in Dries Mertens stroking the ball into the top corner from 20-yards. The second: a Barcelona goal from Barcelona with quick one and two touch passing before a through ball for Nelson Semedo, a cross and a tap-in for Antoine Griezmann. The Catalans will be without Arturo Vidal at the Nou Camp after he was sent off for a reckless challenge and a head-to-head nuzzle with Mario Rui.

Chances of progression
Napoli have fallen at the last-16 stage on the last two occasions, and Barcelona’s away goal means the same is more than likely on this occasion. With Napoli’s greatest ever goalscorer Dries Mertens in the side you never know, but they will have to defend extraordinarily well to prevent Barcelona trotting into the quarter-finals.

Form since the restart
Barcelona’s 21 points from 11 games wasn’t enough as Real Madrid’s consistency proved to be the difference in La Liga. Napoli’s disappointment at finishing seventh in Serie A was alleviated as the path to the Europa League was opened up through their Coppa victory over Juventus – their first trophy in five seasons.

Key battle: Lionel Messi v Diego Demme
Napoli have enjoyed an upturn in form since Diego Demme’s arrival from RB Leipzig in January. The defensive midfielder will need all of his energy and positional awareness to deal with Messi, who’s desperate to win Europe’s showcase competition for the first time since 2015. Far too long a winless period for the greatest ever.

What happened in the first leg?
Bayern Munich showed they are streets ahead of Chelsea – it was 3-0 but it could have been more. Willy Caballero had already made three or four good saves and Thomas Muller had hit the bar before Serge Gnabry opened the scoring for Bayern. The former Arsenal winger doubled their lead before Alphonso Davies used his ridiculous pace to race through the ‘Chelsea defence’ and lay the ball on a plate for Robert Lewandowski to score the third. Chelsea did have chances in the game, but were wasteful, and – in truth – other than Mateo Kovacic, the Blues looked utterly overwhelmed by Bayern’s quality and overawed by the occasion.

Chelsea will come up against Alphonso Davies again next month ⚡️

Last time out, they had no idea how to stop him 😳pic.twitter.com/srXnY7TrCq

Chances of progression
There’s no chance for Chelsea, just an opportunity to regain some pride, or at the very least prove they can avoid embarrassment. A gung-ho approach would be fun, but could be very psychologically damaging ahead of next season’s competition. Then again, aiming for a clean sheet will likely end in disaster anyway. F*** it, go for it Frank.

Form since the restart
Chelsea are patchy, Bayern are patchless. The German side have won all eleven of their games, nine as they walked the Bundesliga title and two in the DFB-Polkal to secure the double. They scored 33 goals and conceded nine. Chelsea won six of their last nine Premier League fixtures to qualify for the Champions League, scoring 17 and shipping 15. One impressive victory over Manchester United in the FA Cup semi-final was followed by disappointment as they lost to Arsenal in the final.

Key battle: Robert Lewandowski v Kurt Happy Zouma
Kurt Zouma is the best of a bad centre-back bunch. Frank Lampard still has no idea who are his best two or three in the centre of defence, but Zouma is the top man. He will have to put in the performance of the season to stop Lewandowski, who has scored a Champions League goal every 48 minutes. Pray for Happy.