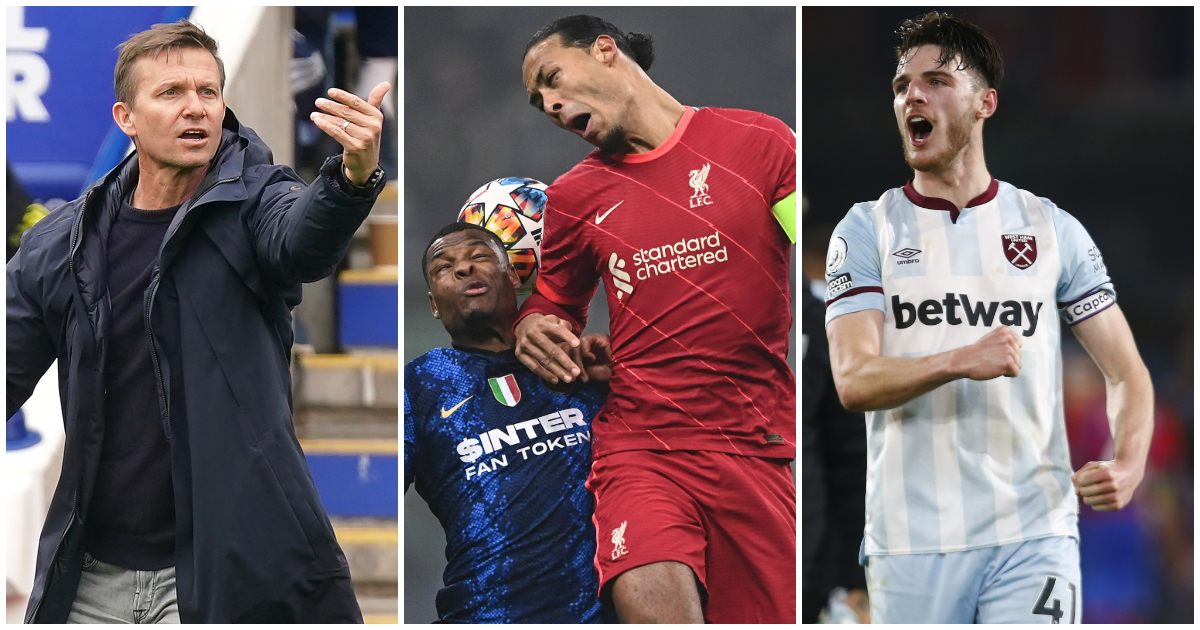 Inter won’t do something ‘crazy’ at Anfield, will they? Jesse Marsch needs a win for Leeds, while West Ham hope Declan Rice can rediscover some form…

Game to watch – Leeds v Aston Villa
In a Champions League midweek featuring the Premier League’s two best teams in the knockout stages, we’d normally expect to focus hard on either Liverpool or Manchester City. But both were so good a fortnight ago that that their last-16 second legs should be routine strolls against Inter and Sporting.

So to the bottom half of the Premier League we go, which isn’t where either Leeds or Villa would have wanted to find themselves with two-thirds of the season now passed. Villa acted decisively and perhaps they are in a better place with Steven Gerrard in charge after their brief foray into the relegation fight.

Leeds remain entrenched in that scrap and only results elsewhere kept them out of the bottom three at the weekend, when Burnley spectacularly missed the chance to leapfrog Jesse Marsch’s new side. Marsch takes charge of his first game at Elland Road on Thursday night when no doubt he will be afforded a warm welcome despite the home supporters still mourning the exit of Marcelo Bielsa.

Under Bielsa, Leeds went to Villa only three weeks ago and claimed the last point earned on El Loco’s watch in a typically frantic 3-3 draw. Those three Villa goals were the first of 20 conceded in February which ultimately did for Bielsa, with no club having collected fewer points over the last six matches.

In contrast, on the back of two wins over mid-table rivals Brighton and Southampton, Villa are finding their groove, sitting seventh in the same form table propped up by Leeds. Which makes the prospect of the Villans’ visit even more daunting for a home side still beset by injuries.

It is the start of a huge few days for Leeds, with Norwich due at Elland Road on Sunday. Anything less than four points from two winnable games will have arses twitching even faster in West Yorkshire.

Team to watch – Inter Milan
Whether Liverpool’s second-leg clash on Tuesday night is indeed a formality will depend on Inter at Anfield. The Italians have a two-goal deficit to chase on Merseyside and Nicolo Barella admits “it will take something remarkable” to overturn the tie. “But then Inter are crazy and anything can happen.”

Indeed. At least they enjoyed a confidence-boosting weekend, with Simone Inzaghi’s men putting five past Salernitana on Friday night, when Lautaro Martinez grabbed a hat-trick and Edin Dzeko helped himself to a couple more.

The visit of Serie A’s bottom-placed side could not have been better timed with Inter struggling woefully in front of goal of late. Their 2-0 home defeat to Liverpool was one of four consecutive matches in which they failed to score and five they failed to win.

Yet still the Serie A title race is in their hands as they now sit two points off AC Milan with a game in hand so their tails must be up, unlike a fortnight ago when it was seen as the worst possible time for Inter to face a Liverpool side cooking on gas.

Inter have to find the balance between looking for the first goal without leaving the back door ajar. Achieving one of those aims against this Liverpool side his hard enough. But in the first half at the San Siro, they were arguably the better team and simply lacked the killer instinct. With Martinez and Dzeko back among the goals, Liverpool cannot allow complacency to creep in otherwise something ‘crazy’ might just happen to those Quadruple ambitions they dare not speak of.

Player to watch – Declan Rice
West Ham might have been given the toughest possible draw in the Europa League last 16 as they prepare to make their first appearance at this stage of the competition against the six-time winners. But the Hammers may also have timed their run at Sevilla perfectly…

The Spaniards find themselves amid an injury crisis, while their domestic form leaves them closer to third-placed Barcelona than leaders Real Madrid.

“We have too many absentees, much more than we would logistically like,” said Julen Lopetegui before the first leg in Spain on Thursday evening.

The Hammers too have their own fitness concerns but Jarrod Bowen could recover from an injury sustained in the defeat to Liverpool on Saturday when the visitors arguably deserved something from the game. Rice sat that one out with a non-Covid illness but the England midfielder should be back to pit his wits against Ivan Rakitic and Thomas Delaney.

Rice, though, hasn’t displayed his best form of late. In a box-to-box role, after a blistering start to the season, his performances have dipped, as have the Hammers’ overall. They’ve won one of their last five and face a huge week and a half, with Villa and Tottenham to face as well as both legs against Sevilla.

Rice’s more regular forays forward have clipped Thomas Soucek’s wings somewhat and though there remains great potential in their partnership, their chemistry requires some tweaking. If Rice’s desire to play in the Champions League is as ‘urgent’ as he says, then Thursday evening at the Ramon Sanchez Pizjuan Stadium would be a great time and place to prove again his credentials.

Manager to watch – Roy Hodgson
Hodgson was in a curmudgeonly mood after Watford’s defeat to Arsenal extended the Hornets run of home defeats to seven.

What really got Hodgson’s goat was the reaction of the home fans to his decision to introduce Edo Kayembe for Imran Louza, rather than perhaps Tom Cleverley, who was bad enough to get in the weekend’s worst XI.

“I don’t trust their judgement unfortunately,” said the manager in a wonderfully honest response to a question about the supporters’ dissent. “My problem is the ones that are not their favourites are the ones who are doing the best job for the team right now.”

It marked a fractious end to a day that was not without its positives for Watford. The Hornets found a better balance between attack and defence, with two of the three goals they conceded a consequence of individual mistakes rather than any structural flaw.

Hodgson is clearly in no mood to compromise ahead of Thursday’s crucial trip to Wolves, who endured a miserable weekend of their own. But taking on his own fanbase, so early in his reign, is a risky strategy without the points to back it up.

European game to watch – Real Madrid v PSG
While the Premier League representatives have comfy cushions ahead of their Champions League last-16 second-leg ties, the same cannot be said of the other teams looking to secure a quarter-final place this week.

PSG and Bayern Munich scored late goals a fortnight ago to earn a slender lead in the Parisians’ case and parity for the Germans against RB Salzburg. So most eyes in Europe will be on Madrid on Wednesday when Real attempt to overturn that deficit inflicted by the player they crave the most: Kylian Mbappe.

Mbappe, though, is in danger of missing out on a Real reccy before a potential summer move after being injured in training on Monday. He and Mauricio Pochettino are currently enduring a nervous wait on a scan result,

For Real, the concession of that late goal was a hammer blow. Carlo Ancelotti received heavy criticism for his defensive tactics in Paris but they were so close to paying off. Mbappe’s intervention, though, places the emphasis on the La Liga leaders to attack PSG while being mindful of the threat of Neymar, Lionel Messi – both back on Spanish soil – and perhaps Mbappe.

They warmed up with a 4-1 demolition of Real Sociedad at the weekend to open up an eight-point lead at the top of La Liga after trailing early on at the Bernabeu. Domestically, Ancelotti and Pochettino have few concerns. But their success will be measured in the Champions League, with failure imminent for one or the other.

EFL game to watch – Sheffield United v Middlesbrough
The Chris Wilder derby takes place on Tuesday night when Blades supporters welcome back one of their own for the first time since he was axed last season.

In the meantime, Wilder has been sprinkling his magic on Boro, with the Teessiders looking to retain their spot in the play-off places while United look to leapfrog them.

For the first time in a long time, it seems there is something brewing at The Riverside, but the Blades have risen further since this game was initially scheduled on New Year’s Day. Back then, they were mired in mid-table but two defeats in 10 matches has put them on the periphery of the play-offs.

Luton, just below United in the table, will be hoping for a draw at Bramall Lane that will allow them to go fifth with a win over Coventry on a night when the bottom two and two of the top three are also in action.