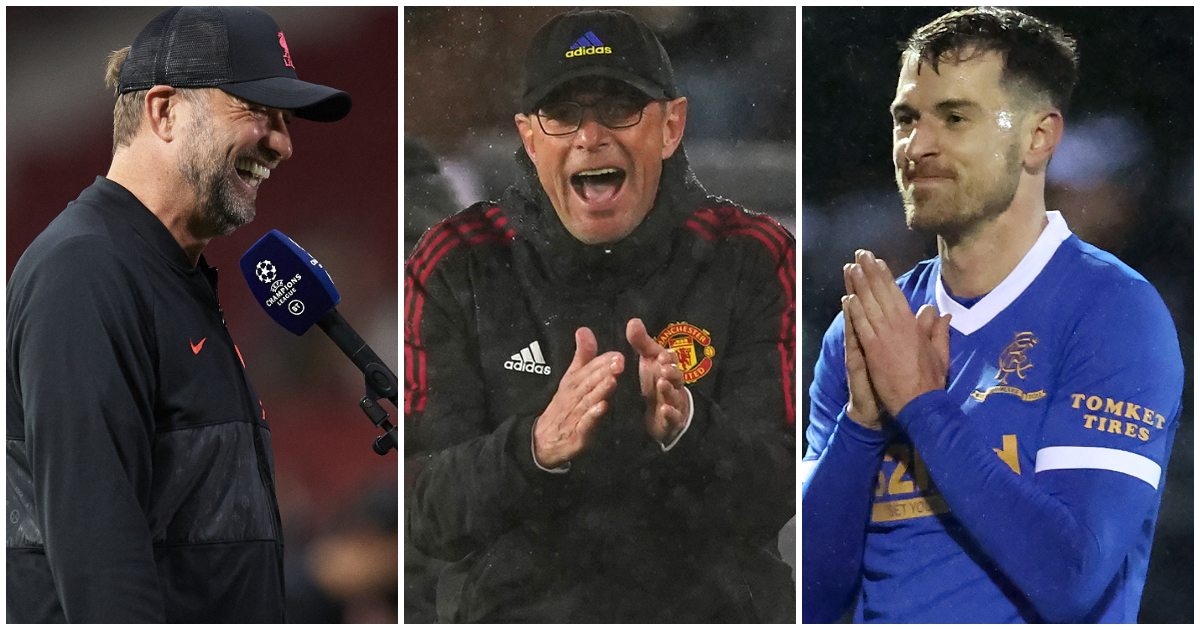 Liverpool face Inter at a perfect time, and City look serene upon the restart of their Champions League campaign while Man Utd will be drawing 1-1 with Brighton…

Game to watch – Inter Milan v Liverpool
For the second Champions League matchday in a row Liverpool go to the San Siro, though the stakes are rather higher this time for the Reds than December’s clash with AC Milan when only a perfect record was on the line after Jurgen Klopp’s men had p*ssed a supposed group of death.

On Wednesday, the Reds meet Serie A champions Inter in their last-16 first-leg clash in Italy. A return to Italy marks the start of “the decisive part of the season” as Klopp described the upcoming weeks in the wake of the 1-0 win at Burnley on Sunday.

At Turf Moor, the Reds’ forwards struggled to find their rhythm but more pleasingly for Klopp, his defence was looking as stingy as it has all season with Virgil van Dijk seemingly back to his best.

“I would say that is good timing,” said Klopp, as is the fact Liverpool have a fully-fit squad for the first time in two-and-a-half years. None of Joe Gomez, Curtis Jones, Takumi Minamino or Divock Origi even made the Reds’ 20-man squad for the trip to a wet and windy Turf Moor.

For Inter, though, the visit of Klopp’s relentless Reds comes at the end of their most testing period of the season. Last weekend they surrendered a lead to lose the Milan derby, before a week later giving up top spot to their city rivals after being held at third-placed Napoli, who sit only a point behind the defending champions. At least a Coppa Italia win over Jose Mourinho’s Roma last Tuesday offers the Nerazzurri a chance for a modicum of revenge over their derby rivals in the semi-final.

Before that, though, Simone Inzaghi has to tease an improvement from players out of form, like Lautaro Martinez and Stefan De Vrij, while allaying fears in Italy that Inter are facing their hardest game of the season at the worst possible time, while Liverpool look as fresh has they have in years.

You certainly cannot take your eyes off United at the moment. Which is in no way a compliment.

The Red Devils once again turned up for half a shift at the weekend, when Southampton preyed on their flaws to become the latest side to peg back Ralf Rangnick’s men and deny them victory. The Saints weren’t too shy to admit that they knew what to expect from United.

“It’s not a big secret that when they lose the ball, the reverse gears are not the best from everybody,: said Ralph Hasenhuttl. “The pressing was good from them in the beginning but they aren’t used to doing it for more than 30 or 40 minutes.”

From most teams you would expect a tangible reaction to such comments from an opposition manager, but with this United, it probably never even registered. And if it did, it would almost certainly have been met with a shrug. Like all the other times.

Which is a massive problem for Rangnick. Is it possible to arouse these part-time performers, this soft squad, to turn up for 90 minutes? Is even that bare minimum too much for this rabble?

It seems so, but such is the technical quality within the group, there is still lingering hope in some quarters that United might just go on a run, especially while their top four rivals also flounder.

But, just as likely, Brighton will turn up at Old Trafford and expose United’s flaws even more ruthlessly that Southampton.

Team to watch – Manchester City
While United stumble between rakes, City continue serenely along their path towards a retaining their Premier League title. But the Champions League is the one Pep Guardiola and the City hierarchy really want as they begin their ninth consecutive knockout stage.

City have gone as far as they can to build a European pedigree without actually winning the damn thing and with everything hunky-dory on the domestic front, Guardiola can focus hard on righting the wrong of last season when they fell at the final hurdle.

It is unlikely that Guardiola will be tempted to overthink their last-16 clash with Sporting Lisbon. City go to Portugal as heavy favourites, though it was in Lisbon two seasons when they were dumped out at the quarter-final stage by Lyon on one of the darker nights of Pep’s reign. That seems an age ago now with Guardiola declaring the harmony in his squad as the best it has ever been.

It was a theme Guardiola kept returning to in his pre-match press conference, one that was starkly absent from Sporting’s weekend. Ruben Amorim’s side drew 2-2 with Porto, surrendering a two-goal lead in a game that featured five red cards and a Royal Rumble-esque melee of the like that no one likes to see. Except, of course, we all do.

Sporting, in the knockout stages for the first time since they were humped 12-1 on aggregate by Bayern Munich in 2009, will need to show similar fight in a more assertive manner against one of the favourites for the title, but their home record is good. They have won seven of their last nine matches at the Jose Alvalade Stadium, though City will surely be too strong for Portugal’s second-placed side.

Player to watch – Aaron Ramsey
The Rangers new boy made his first start for the Light Blues on Saturday after a couple of substitute appearances and Ramsey will be hoping that an hour in the Scottish Cup against League Two opposition will be enough to convince Gio van Bronkhorst to start him in the Europa League against Borussia Dortmund on Thursday.

Ramsey picked out the Dortmund tie as one of the things that attracted him to Ibrox on deadline day but the Rangers manager may yet need more persuasion over naming the midfielder in his XI for the trip to Germany.

His start in Dumfries at the weekend was his first since the opening day of the Serie A season, with his hour on the artificial grass making up almost a third of his total minutes this term. Prior to Saturday, the longest he had played in any one game since August was 20 minutes.

Another issue for Ramsey is the strength in depth at van Bronkhorst’s disposal. Steven Davis also returned to the side against Annan and the Gers aren’t short of options in midfield. But Ramsey’s experience, having faced Dortmund five teams and beaten them thrice, must be tempting for van Bronkhorst against the side closest to Bayern Munich in Bundesliga. There may well be a few Premier League clubs watching on to see if they missed a trick.

EFL game to watch – Peterborough v Reading
Peterborough’s trip to Cardiff last week was billed as a big relegation clash. Posh were pumped 4-0. Then they lost at Preston. But Reading have been similarly hopeless, losing their last eight in all competitions, which makes their London Road meeting on Wednesday a must-win for both sides.

It really ought to be for Reading boss Veljko Paunovic. It was thought he might be gone by the time the Royals head to Peterborough, and he might yet be the chop, but if the trigger as going to be squeezed, it almost certainly would have been before now.

So this is perhaps his last chance to save his job. Only two points separate Posh in the drop zone from Reading on the periphery of the safety line. Slumping into the relegation places will surely see the Royals make a change, with supporters already on the point of mutiny.