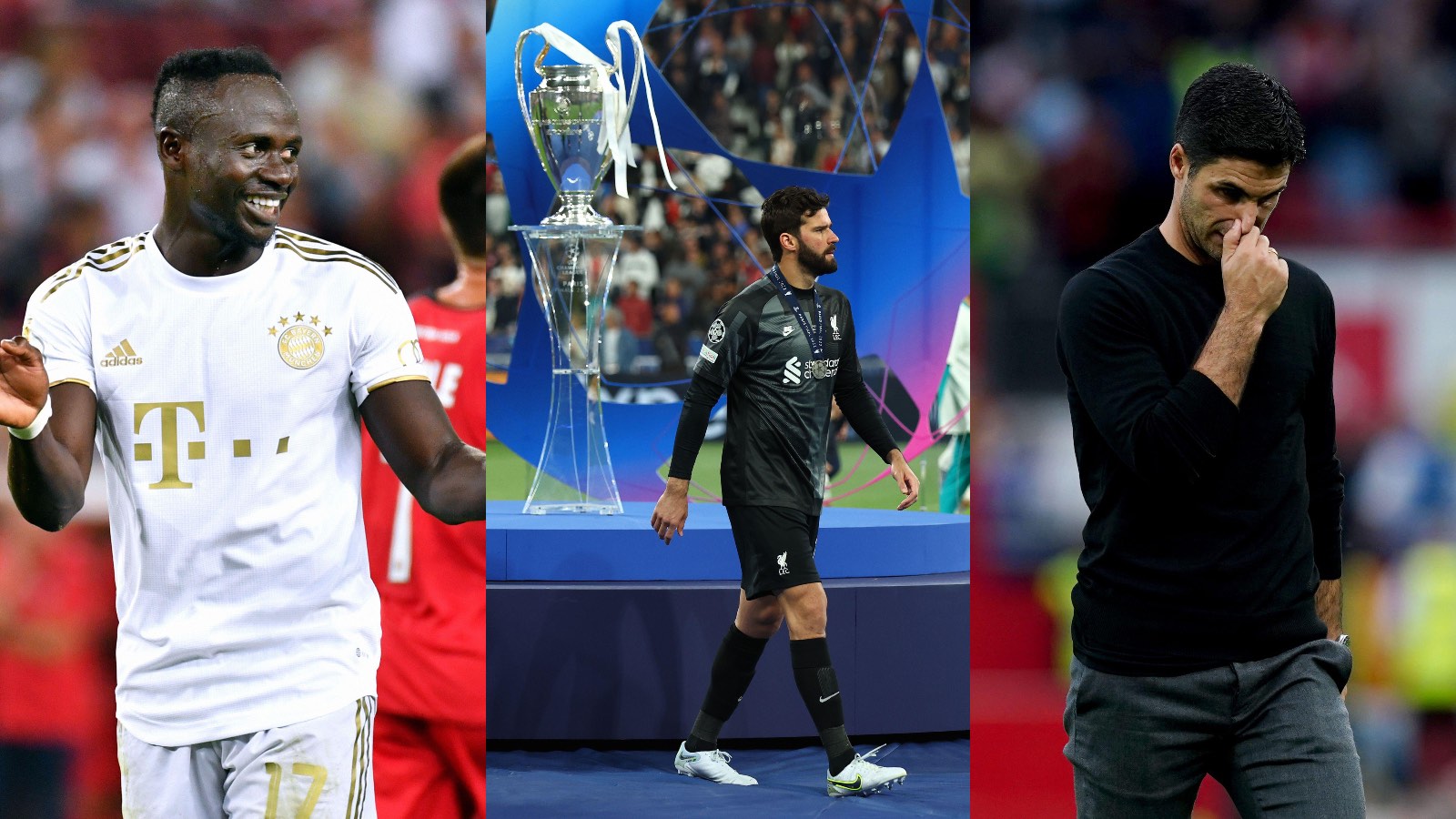 Liverpool can use the Champions League to snap out of their funk, while Rangers return to the top table and Mikel Arteta has no choice but to shuffle his Arsenal pack.

Game to watch – Napoli v Liverpool
The Champions League is a safe space for Liverpool. Like a bath or a pint in the pub at the end of a long day, no matter the sh*t being hurled your way, you’ve always got it to look forward to.

Jurgen Klopp’s side cruised through arguably the toughest group last season with a 100% record, scoring 17 goals in six games. They were a different team then though: hovering around their peak rather than scrambling to keep out of a trough.

It’s not easy to put your finger on exactly what’s wrong with Liverpool at the start of this season. The midfield is unsettled due to injury and Sadio Mane’s departure has had an impact, but that doesn’t really explain why the levels of everyone – except perhaps Roberto Firmino and Harvey Elliott – have dropped below par.

A big Champions League game could be just what Klopp and his side need to snap out of a lethargy that’s clouding their judgement and football in the Premier League. They will need to wake up against Serie A leaders Napoli, and Trent Alexander-Arnold may need a particularly hefty shot of adrenaline ahead of a battle with new signing Khvicha Kvaratskhelia, who’s got four goals and an assist from left wing already following his £9m move from Dinamo Batumi.

Team to watch – Rangers
It’s been over a decade since Rangers last played a Champions League group game and a lot has happened since.

Around ten months after Wayne Rooney’s 87th-minute penalty knocked them out of Europe’s showcase competition in November 2010, Rangers were losing 1-0 to Stirling Albion in the fourth tier of Scottish football. They’ve since returned to the Premiership, winning it in 2020-21 under Steven Gerrard, and lost on penalties in the Europa League final last year.

This is a club and a fanbase more than ready for those big European nights at Ibrox.

But they will have to wait for that and instead endure an away day in Amsterdam, the poor souls, as they take on Manchester United feeder club Ajax.

The Dutch side, as is so often the case, have had their core ripped out in the summer transfer window. Erik ten Hag has taken Lisandro Martinez and Antony with him to Old Trafford, Bayern have poached Ryan Gravenberch and Noussair Mazraoui, while Sebastian Haller’s gone to Borussia Dortmund. They made £195m in player sales this summer and spent less than half of that on replacements, including Calvin Bassey, for £21m from Rangers.

Ajax will probably still be pretty good though, such is their ability to nurture the next set of young talent. Five wins from five in the Eredivisie to start the season doesn’t suggest they’re a team in crisis.

Rangers, meanwhile, have slipped five points behind old foes Celtic, who will feel better prepared for their Champions League opener – at home to Real Madrid, no less – having spanked Rangers 4-0 on Saturday.

Manager to watch – Mikel Arteta
It was very apparent against Manchester United why Arsenal wanted a defensive midfielder and a winger before the end of the transfer window. As Christian Eriksen passed the ball through the lines to Bruno Fernandes for the second time, many an Arsenal fan must have been wondering whether deadline day target Douglas Luiz would have snuffed that move out, or the one before, both of which led to United goals on Sunday. He surely wouldn’t have let Eriksen march unchallenged through the middle of the pitch to set up the third.

And with 20 minutes to go, as Arsenal chased the game and needed more penetration from the wings, Arteta was forced to turn to Emile Smith Rowe, an attacking midfielder, Eddie Nketiah, a striker, and then finally full-back Takehiro Tomiyasu, with no wing option available.

As was the case when they failed to sign a striker in January, it was a foreseeable problem they left it too late to fix. And given they had no European football to worry about last season, squad depth could be a real issue this time around.

For Arsenal, whose priority is undoubtedly a place in the top four this season, the Europa League is like a subsiding headache. The longer the competition wears on, the less irritating it becomes. The closer Arsenal get to winning it, the more seriously they will take it.

Arteta’s selection against Zurich on Thursday will give us a big clue as to how badly he wants to win the Europa League, but you would expect him to make big changes to ease the pressure on his starting XI, who will play far too many games this season if competitions aren’t ranked and key games targeted.

Player to watch – Sadio Mane
Mane moved to Bayern Munich to be the main man and has already asserted himself as just that. It took him just 29 minutes to score his first Bundesliga goal in the 6-1 drubbing of Frankfurt, after which he took hold of the megaphone usually reserved for Thomas Muller to serenade and conduct the Bayern fans from the stand.

Mane has since scored a further three goals for Bayern, who travel to Milan to face Inter on Wednesday. The German side will be hoping to be on the right side of a Mane masterclass in the Champions League this season after the Senegal intentational dumped them out of the competition with a brilliant brace for Liverpool at the Allianz Arena in 2019. As is the case with all world-class players in Europe, particularly if they play for a club as domestically dominant as Bayern, Mane has been bought for this competition.