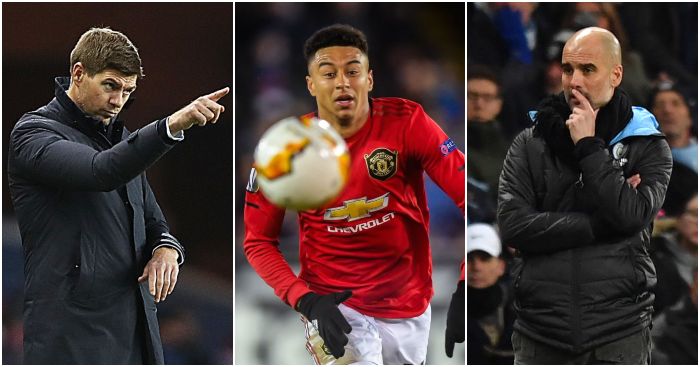 Much like a frustrated email terminated with an exclamation mark to pierce the tension, or the passive-aggressive deployment of a ‘pal’, ‘buddy’ or ‘chief’, beating Real Madrid would be a far more effective statement of defiance than a polished press release or in-house interview with the CEO. It would threaten to make a quiet mockery of the system that is hoping to bring them down.

The persistent argument is that Man City are simply victims of ring-fencing, targets of the cartel, scapegoated sufferers of conspiracy; that they have been made an example of by a governing body unwilling to share too many slices of that delectable money pie.

Whether or not that ignores legitimate concerns supporters should have over the stewardship of their club – and that stands for every fanbase of every similarly-sized team so don’t bloody start – hardly matters now. This is a situation that has unified a club that might have been slowly fracturing, relighting that fire to fight one common perceived enemy.

And just imagine if they can win the competition they are supposed to be ejected from next season. It would bring a new level of disrepute to the scenario in what could theoretically be Pep Guardiola’s final opportunity to right the last remaining wrong of his tenure in England.

Against Real, a club they believe to have ‘pressured’ UEFA into issuing the ban, there is no greater motive. Man City might yet be forcibly ejected from their seat at Europe’s top table but they will relish the chance to remove privileged royalty from their gilded throne first.

Players to watch – Jesse Lingard and Andreas Pereira
They might not even feature. Ole Gunnar Solskjaer omitted both from his match-day squad against Watford and was wholly justified in doing so. Neither Lingard nor Pereira have been performing to the requisite standard for some time and had been allowed to coast for too long.

The intrigue now is in how they react, if at all. When it comes to squad deadwood, both are approaching the seabed with dwindling hope of salvation. Time is of the essence to rescue their Old Trafford careers.

So whether it is a case of either appearing from the bench against Club Brugge, being given an unlikely reprieve by starting or even being overlooked again, the message from the manager has been sent and now must be consistent. The biggest impact Bruno Fernandes might have had so far is in transforming the culture at the club: there will be no more passengers on this journey.

Manager to watch – Steven Gerrard
There are two obvious consequences of a winter break. One is that it allows a stuttering team to rest and reset, to focus on improving and finding solutions away from the spotlight, to start anew. But it can stall a winning side’s momentum, interrupting them at a time when even the slightest threat to their equilibrium can cause lasting damage.

Such an elongated interval can be an essential turning point or an unnecessary obstacle.

Scotland offers an obvious example. When the Premiership paused on December 29, Rangers had just beaten Celtic to trail them by two points with a game in hand. They had won 13 of 15 league matches, drawing the other two. The race was on.

Since the league reconvened, Celtic have recovered from that defeat to record eight successive wins. Rangers have lost to Hearts and Kilmarnock and drawn with Aberdeen and St Johnstone in that time, falling 12 points behind.

Steven Gerrard was “not shocked or surprised” by that most recent setback. Having insisted in December 2018 that Rangers “shouldn’t have to work that hard to win at places like this” following a late victory at McDiarmid Park, he watched as Stevie May equalised in the 80th minute on Sunday to effectively end their title challenge.

All is not lost. Pressure has undeniably increased on the 39-year-old but he has still done a fine job. Rangers are 14 points behind last season’s total, with ten games remaining.

They also boast a slender advantage in Europe, in comparison to Celtic’s parity with Kobenhavn after a first-leg draw. Ianis Hagi handed The Gers a 3-2 lead to take to Portugal and protect against Braga, albeit with a defence that has deteriorated since impressing from September to December.

Not since 2011 has a Scottish side won a post-group stage European knockout tie. Rangers might consider it a good omen that it was they who advanced past a Portuguese side – Sporting Lisbon – at the last-32 round of this competition nine years ago. Gerrard will only care for such harbingers of promise if they are accompanied by genuine, tangible improvement.

If a Rangers manager without the standing of Steven Gerrard had overseen successive post-break collapses – having spent relatively vast resource – it's fair to say they'd be getting a hard time.

Team to watch – Chelsea
A side that has suffered more false dawns than a Vicar of Dibley impressionist convention this season must show that any progress achieved against Tottenham can be sustained for longer than 90 minutes.

Chelsea have won consecutive games in all competitions twice under Frank Lampard: in that run of seven successive victories between September and October, and when they beat Nottingham Forest and Burnley in the space of six January days.

Every other step forward has been followed by two back. The win over Hull came before a draw with Leicester and defeat to Manchester United. The win over Arsenal was the precursor to a stalemate against Brighton. From October 26 to January 5 their form was: WLWDWLDLWLWLWLWDW.

I have psoriasis and my skin is less patchy.

So the challenge is to maintain some of the momentum built at the weekend. Bayern Munich relied on two goals in the final 20 minutes from Robert Lewandowski to overcome Paderborn on Friday and will have used those extra few hours of rest and preparation wisely.

Hans-Dieter Flick was appointed manager on November 3 and has won 14 of 17 games, including six of seven away at an aggregate score of 5-25. Stamford Bridge should not expect another subservient visitor.

Football League game to watch – Blackburn v Stoke
The renaissance of Tony Mowbray might be one of the Championship’s most unexpected twists. After resigning from third-tier Coventry in September 2016, it took the 56-year-old five months to get back on the managerial horse at Blackburn. Despite a steady improvement, relegation by goal difference could not be avoided.

Rovers returned at the first attempt, eased to safety last season and are pushing for the play-offs in February. Mowbray is the 15th-longest serving manager in the Premier and Football League and no Championship club has more points (33) than Blackburn in the 18 games since the most recent international break.

Stoke will hope their own transformation bears similar success. While both their struggle for consistency and battle against relegation continue unabated under Michael O’Neill, the improvement is obvious. A team that beat West Brom away last month will not be underestimated at Ewood Park.

European game to watch – Napoli v Barcelona
“Can Napoli win the Champions League?” asked Lorenzo Insigne earlier this week. “Never say never.” But Lionel Messi spoke of how Barcelona had become “nervous” and “inconsistent” with “problem after problem” emerging, adding: “The way we are right now I don’t think it’s enough to win the Champions League.”

You would not think the former plays for a side sixth in their domestic league, 24 points behind the leaders, with the latter speaking on behalf of a team top of theirs. But everything Napoli and Barcelona thought they knew has changed this season.

Both go into this game, their first competitive meeting, with head coaches who have never managed in the Champions League. Gennaro Gattuso replaced Carlo Ancelotti in December and has beaten Juventus and secured a Coppa Italia semi-final first-leg advantage in an otherwise indifferent start. Quique Setien has won seven of nine games since his January ascension.

But the Stadio San Paolo is the great leveller. Since 2011, Napoli have beaten Liverpool (twice), Chelsea, Borussia Dortmund and even Swansea at home, drawing with Porto, Bayern Munich and PSG.

Barca should expect to visit a team in the exact opposite position as them: one with nothing to lose. The last time they faced that scenario was when they melted at Anfield in May.