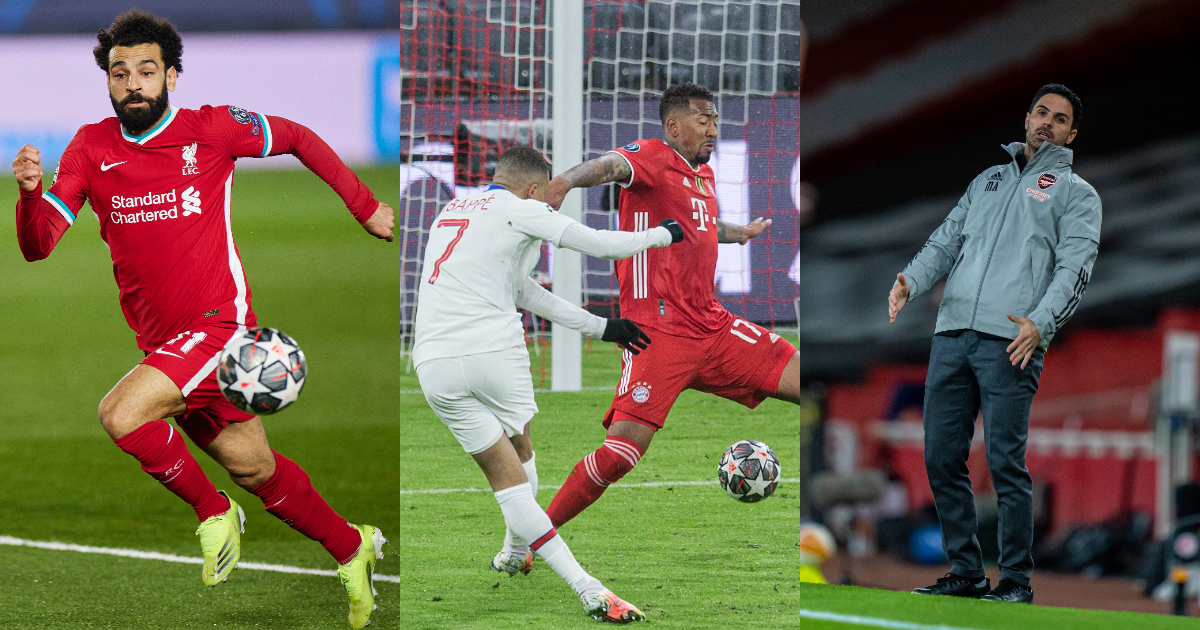 Game to watch – PSG v Bayern Munich
The first leg was no different to dozens of other games Bayern have played and won comfortably in the last two seasons, save for two anomalies – Kylian Mbappe and Robert Lewandowksi. If the latter was playing, Bayern would have won; if the former wasn’t playing, Bayern also would have won.

Hansi Flick’s side had 31 shots to PSG’s six, 64% possession and completed over 200 more passes. But PSG managed to keep their heads above water despite the waves of irrepressible Bayern pressure that have left every other team in Europe gasping for air until they can flail arms and kick legs no longer.

Backs-to-the-wall defending isn’t much fun when there’s an air of inevitability to its subsequent failure, but without Lewandowski Bayern lose that inexorable eventuality. And good defending often means winning games when you’ve got the best counter-attacking forward in world football to snatch goals at the other end. Especially when the best counter-attacking forward in world football is accompanied by arguably the second: Neymar was at his brilliant best in the Allianz Arena.

Bayern will again be without Lewandowski on Tuesday, for what will likely be a very similar affair to the first leg. Yes, please.

Manager to watch – Mikel Arteta
As it’s The Sun, rather than taking this with a pinch of salt, feel free to grab a handful and throw it at your computer screen, but their report claims that some ‘senior’ Arsenal players have become ‘increasingly frustrated’ at Arteta’s attempts to ‘paint a picture that the fault for the side’s poor season is all down to them’.

While ‘all accept’ their own shortcomings there is a burgeoning belief that the manager deserves more blame as they ‘have found it hard to know exactly what their coach wants from them’. And three further issues are said to have been raised behind the scenes – from tactics to ‘management techniques’ and a ‘lack of team identity’.

Stories of inter-club fractions and infractions usually have some basis in reality and tend only to go one way: to the detriment of the manager. Just ask Frank Lampard.

Again, it may all be utter bullsh*t, but even so, they’re not claims that anyone would dismiss out of hand given the lack of progress Arsenal have made under Arteta and the general feeling of ignominy surrounding the club. It all could be true; that’s a problem even if it turns out to be false.

Arsenal undoubtedly have a big rebuilding job to do. They’re currently ninth in the Premier League and in truth that position is just about a fair reflection of the quality of their squad. But it’s still unclear whether Arteta is the man who should be tasked with the necessary renovations.

Defeat on Thursday would effectively end Arsenal’s season. Sacking or sticking with Arteta should that happen would be a massive statement of intent either way.

Player to watch – Mohamed Salah
Without Mohamed Salah’s 19 Premier League goals and three assists, Liverpool would be 15 points worse off and in a relegation battle. There must have been times this season when the Egyptian questioned where his teammates had gone, particularly after his four goals in their three heaviest defeats: 7-2 to Villa; 4-1 to Man City; 3-1 to Leicester. He really has done about all he could.

Jurgen Klopp will be hoping that’s a feeling based purely on individual games rather than one leaking into a conversation about his wider Liverpool future. But just as it’s now become impossible for Spurs fans to begrudge Harry Kane for wanting to up sticks, a Champions League exit on Wednesday and failure to get into the top four in the Premier League would make it much harder for the Liverpool masses to resent their main man for considering other options. Liverpool may not deserve better after this season, but Salah certainly does.

But it ain’t over yet. Liverpool are unlikely to overcome a 3-1 deficit, particularly – and weirdly given it’s ‘one of those nights’ – at Anfield. But despite a decent performance from Madrid in that first leg, this really isn’t a great Real team, and if Liverpool go at them rather than inexplicably backing off and allowing Toni Kroos all the time and space he likes they could absolutely turn this one around.

Team to watch – Manchester City
It should be 2-2. Jude Bellingham’s goal should not have been chalked off – if anything he was the fouled not the fouler. And City weren’t quite at it at the Etihad. Despite the majority of possession and two excellent goals, Dortmund had their fair share of good chances and were a minute away from what would have been hailed as a near perfect Champions League away performance.

Erling Haaland laid on a beautiful assist for Marco Reus but didn’t score and hasn’t in his last three in all competitions. Which should be a worry in itself – this is his longest goal ‘drought’ in a Dortmund shirt and he’s got an insatiable thirst. The only surprise when he mugged off Ruben Dias in the first leg was that his show of superior strength wasn’t followed by the ball hitting the back of the net. Dias and City surely won’t be so fortunate next time.

Wednesday’s game will likely take a similar pattern to the first, with City dominant but wary of the obvious deadly threat Dortmund pose on the counter. Pep Guardiola could do something clever and win, he could do something too clever and have his head in the toilet bowl at the hands of Haaland, or he could be smart and not try to be clever at all.

Football League game to watch – Sunderland v Wigan
Wigan’s 1-0 win over Sunderland in December was the first time the two sides have met since a Steven Fletcher brace secured a 3-2 Premier League win for the Black Cats in January 2013.

Now, Sunderland need three points to cling to their hopes of automatic promotion from League One, while Wigan need victory to prevent their slide into League Two – they’re currently one point from safety.