Home All The News UCL round-up: Barcelona and Juventus through to knockout stages 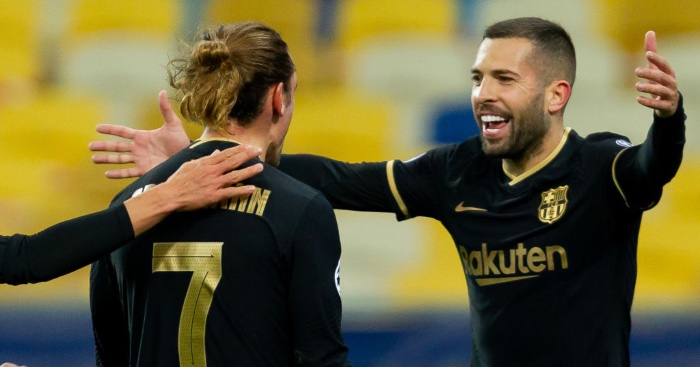 Barcelona put their domestic struggles to one side with a 4-0 victory over Dynamo Kyiv that sealed their progress through to the Champions League knockout stages.

Ronald Koeman’s side suffered another LaLiga loss at the weekend, this time to Atletico Madrid, but they have been perfect in Europe so far with four wins from four.

It was goalless at half-time in Ukraine but Sergino Dest scored his first for the club in the 52nd minute and Martin Braithwaite doubled the lead five minutes later before converting a penalty. Under-fire substitute Antoine Griezmann grabbed a much-needed fourth late on.

Barca are three points ahead of Juventus, who left it late to clinch a 2-1 victory over Ferencvaros and are also into the last 16.

Myrto Uzuni gave the Hungarian side a shock lead with a 19th-minute opener in Turin but Cristiano Ronaldo equalised 10 minutes before the break and Alvaro Morata struck the winner in stoppage time.

Victories for Chelsea and Sevilla put both teams through to the knockout stages from Group E.

The two teams have an identical record of three wins and one draw from four matches, and there was symmetry about their results on Tuesday, with both leaving it late to secure 2-1 wins.

Chelsea led through Callum Hudson-Odoi’s first-half goal but were pegged back five minutes from time as Serhou Guirassy headed in. However, Olivier Giroud earned the visitors all three points with a header of his own in added time.

Sevilla were taking on Krasnodar in Russia and took a very early lead through Ivan Rakitic. Wanderson equalised 11 minutes after the break but Munir grabbed the winner in the fifth minute of injury time.

Erling Haaland was on the scoresheet yet again for Borussia Dortmund, this time with a brace in a 3-0 victory over Club Brugge. The Norwegian’s goals sandwiched a fine free-kick from Jadon Sancho.

Dortmund lead Group F by one point from Lazio, who were 3-1 winners over Zenit St Petersburg in Rome.

Ciro Immobile fired into the top corner in just the third minute and Marco Parolo grabbed his first Champions League goal with another spectacular strike in the 22nd minute.

Artem Dzyuba pulled one back for Zenit but Immobile made sure of the points with a second-half penalty.

Manchester United, who suffered a shock loss at Istanbul Basaksehir last time out, got their revenge with a 4-1 victory over the Turkish side at Old Trafford in Group H.

Bruno Fernandes scored a double inside 20 minutes and then left a penalty to Marcus Rashford in the 36th minute, the England international picking himself up to convert.

Deniz Turuc pulled one back with a second-half free-kick that just beat David De Gea before Daniel James finished off the scoring.

In the group’s other game, Paris St Germain secured a much-needed 1-0 victory over RB Leipzig with Neymar’s 11th-minute penalty the only goal.