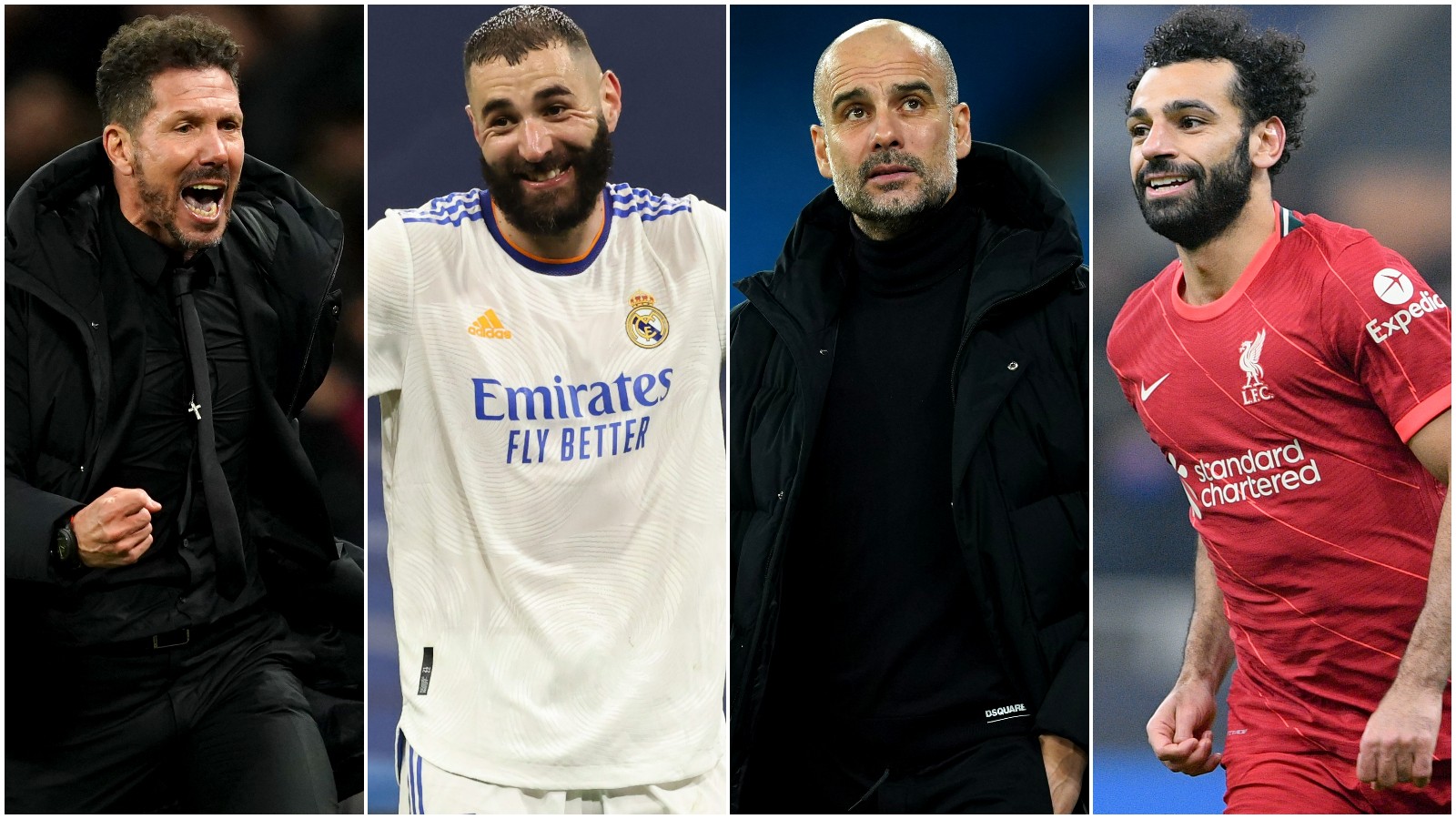 Will Simeone prompt Pep to overthink? Can Benzema fire Real to no.14? Anything – well, almost anything – is possible in the last eight.

Here are some reasons why anyone can win the Champions League, and why everyone won’t…

Liverpool
Why they’ll win it: Because the Champions League comes as part of the Quadruple, which at this stage feels sodding inevitable to anyone not a Liverpool fan…

Liverpool are currently second favourites to win their seventh European Cup, but the Reds know better than Manchester City how to win since the majority of this squad triumphed in Madrid three years ago. And they are now a better team than the one Jurgen Klopp inspired to glory in 2019.

In addition to being bloody good, and Mo Salah doing Mo Salah stuff, Liverpool have perhaps the kindest draw they could have hoped for in the quarter-finals. Though Klopp will insist otherwise, Benfica will hold no fear for the Reds, even if a potential semi-final against Bayern Munich looks more daunting. That said, the Bavarians were brushed aside by Klopp’s men in the last 16 on their way to number six.

Why they won’t: The likes of Bayern and Real can only hope that Liverpool are distracted by their domestic duties, with a Premier League title fight occupying much of Klopp’s headspace and the squad’s energy. What a ‘disadvantage’ that truly is.

Liverpool have swerved major injuries so far this season, but Trent Alexander-Arnold’s hamstring issue has been blamed on the Reds’ workload. Might it catch up with a few more players between now and the end of the season?

That, to be honest, is perhaps their rivals’ best hope.

Manchester City
Why they’ll win it: They have to at some point, don’t they?

City are favourites and understandably so, though that was before a draw that pitted them against Atletico Madrid in the quarters and potentially either Chelsea or Real Madrid in the semis. It’s not the kindest, but City should fear no-one. Perhaps except themselves.

Why they won’t: Manchester United fell hook, line and sinker for Atletico’s sh*t and though City are infinitely more intelligent than their local rivals, the thought of facing Diego Simeone feels like the kind of prospect that could prompt Pep Guardiola to start overthinking. As may be the fact that the meetings with Atletico come either side of the Premier League meeting with Liverpool that may well determine the destiny of the Premier League title.

Even if City navigate their way through Atletico’s traps, then come Chelsea and Thomas Tuchel, who made a habit of beating City in his first few months as Chelsea manager, including in last season’s final. Guardiola and his side have got the better of Chelsea twice this season but it would be very City to lose when it really mattered in the semi.

Chelsea
Why they’ll win it: Because football is weird.

Given all the chaos at Chelsea right now, the Champions League should be way down the list of the club’s priorities. But playing football matches seems to offer the players and coaching staff some blessed relief from the sh*tshow around them and it wouldn’t be a complete shock if the restrictions upon them have created a siege mentality in the dressing room.

And, of course, they know better than anyone else left in the competition that they can win it since they did exactly that last season. On their day, Tuchel’s Chelsea can be a match for any of the sides left in the last eight. Tuchel himself seems to have a hold on Real Madrid, with the German coach never having lost to the Spanish giants in six meetings.

Why they won’t: Hoping for kind draws based more on the Inter Rail map than anything to do with form or pedigree is hardly ideal. With five ties left before the trophy is lifted, the prospect of none being played in front of their own supporters leaves a feeling that Chelsea’s current predicament will catch up with them at some point, especially if they have to face Real Madrid and Manchester City before they even contemplate a Megabus to Paris for the final.

On the pitch, most people would agree with the bookies’ view that three teams look stronger; Real might take issue with them being pitted as fifth favourites behind the Blues – we’ll find out in the quarter-finals if the Spaniards have been harshly judged. To come from the middle of the field, amid their current handicaps, is a huge ask.

5 – Chelsea are unbeaten in their five encounters with Real Madrid in all competitions (W3 D2); indeed no side have ever faced the Spanish giants more often in European competitions without losing. Authority. pic.twitter.com/07EVYdmEbA

Bayern Munich
Why they’ll win it: Because they are a winning machine.

And you could argue that their knockout draws have been kinder than that of the group stage. Still, Bayern won six out of six from a group consisting of Barcelona, Benfica and Dynamo Kyiv, and though Salzburg gave them a minor scare in Austria, the Bavarians blew them away 7-1 in the second leg.

Such firepower could take Bayern all the way. Champions League top scorer Robert Lewandowski is still producing silly numbers while Thomas Muller continues to be a creative genius, especially domestically. In Europe, Leroy Sane and Kingsley Coman are pulling their weight, too, with six and three assists respectively.

Liverpool in the semi-final promises to be a mouth-watering tie, but not one either side will be fearful of.

Why they won’t: As hard to stop as their attack may be, Bayern are not rock solid at the back.

In the Bundesliga, Bayern have conceded 28 goals at a rate of just over one per match. Across Europe’s top five leagues, 15 teams have a better defensive record. Of their their seven rivals in the Champions League last eight, only Atletico have conceded more domestic league goals.

It is something for Salah and co to explore ahead of a possible semi-final, provided both reach the final four. But Bayern’s defensive frailties have yet to be exposed in Europe. No-one has conceded fewer goals in this season’s Champions League and Bayern have the lowest xGA. So there’s that.

Real Madrid
Why they’ll win it: Because this is their competition. Real have won it almost twice as often as any other club – a 14th crown would put them level with every English team combined.

Regardless of their pedigree, Real appear more unfancied than perhaps they ought to be. As fifth favourites in an eight-team field, no-one would have relished drawing Carlo Ancelotti’s men, who showed their character and quality to put PSG back in their box last week.

With a seemingly unassailable advantage domestically, the La Liga champions-elect will be able to rotate players at home and focus all their energy into a trophy they know better than anyone else how to win. And Karim Benzema is on a mission to prove that Real don’t need two new strikers next summer, with only Lewandowski having scored more goals in Europe’s top five leagues this season, in addition to 11 assists.

Why they won’t: It’s fortunate for Real that Benzema is on fire because they don’t look watertight at the back.

No-one has conceded fewer goals in this season’s Champions League, with Ancelotti’s defence breached five times, the same number as Chelsea and Bayern Munich. But their xGA of 9.3 suggests they have ridden their luck. Of the sides to make the last 16, eight have a lower xGA. It’s a similar story in La Liga. Against the kind of attacks they will face in the last eight and perhaps beyond, such defensive frailties will be more ruthlessly exploited.

The flip side of being able to rotate is what momentum Real may sacrifice by resting players around their Champions League matches.

Benfica
Why they’ll win it: They won’t.

Getting to the last eight is an achievement in itself for the third-best team in Portugal right now. They smashed-and-grabbed their way to victory over Ajax to get this far – “Benfica did nothing except for one free-kick… unbelievable,” said Dusan Tadic – but that is not sustainable through the quarters, semi and into the final.

Why they won’t: Feels like we sort of covered that, but OK.

Despite reaching the last eight, even with £67million-rated Darwen Nunez, Benfica are joint 14th for goals scored in this season’s competition having conceded 11 – one more than they’ve netted themselves. They are 22nd for attempts on goal and 28th for average possession.

The fella is a magician when it comes to the Europa League and the ex-Arsenal boss wants to “enjoy the Champions League,” which sounds ominous coming from a manager with his competition pedigree.

Why they won’t: Emery said that Villarreal knocked out one of the “favourites”, which is an overly-positive take on Juventus at the moment. The Old Lady has had a miserable season and, creditable (and hilarious) though their win in Turin was, Villarreal progressed arguably through the weakest last-16 clash.

Bayern Munich await in the next round, which is surely as far as they will go, and all credit to them for it.

Atletico Madrid
Why they’ll win it: Because we’re telling Diego Simeone that he can’t. So he will.

And he has plenty of time to devote to picking out what few weaknesses Manchester City may have to prey and prod at each one in the quarter-finals. Atletico have little else to play for this season, with Guardiola now Simeone’s main focus.

Why they won’t: To say they have little else to play for is not strictly true. Unless they do win the Champions League, they have to finish in the top four in La Liga to be back there next season. They are currently fourth with a two-point cushion between themselves and Real Betis below them.

As much as they enjoyed reaching the last eight, putting one over on Manchester United is hardly the benchmark these days. Everyone seems to be at it.

City won’t be patsies in anything like the same way and though Simeone is certain to cause Guardiola a sleepless night or two before their last-eight meeting, the Premier League leaders will likely be too good for Atletico. And if they aren’t, Chelsea or Real Madrid await in the semis.

Sh*thouse your way through that, Diego.