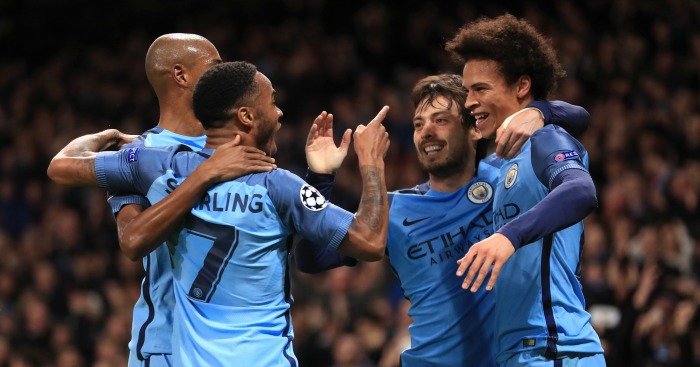 Claudio Ranieri
It may only be a brief period of respite, a window of positivity in a thoroughly miserable season for Leicester City’s manager, but something is better than nothing. When Leicester conceded their second goal in Seville, with half an hour still remaining, Claudio Ranieri looked like a dead man walking the touchline.

Until Wednesday, the Champions League had been Leicester’s port in the storm. Ranieri’s side won four of their six group-stage games between September and November, only one fewer than they have won in the Premier League since being crowned champions in May. After an hour, even that refuge had been lost.

But then, finally, Leicester’s players responded to their manager’s calls. Every time Ranieri has pleaded for fight, unity and strength and failed to instigate any change in his players, he has stepped closer to his eventual exit. And yet, in the toughest of circumstances, Leicester did respond. Jamie Vardy ended his drought of both shots on target and goals, and Danny Drinkwater temporarily managed to stop looking like a lost toddler frantically trying and failing to find his parents in a supermarket.

Sevilla had 20 minutes to find a decisive third goal, but then even Leicester’s defence held firm. Defensive concentration, discipline and communication were the pillars on which last season’s success was built, Leicester conceding eight goals in 17 league matches between Boxing Day 2015 and the beginning of the following May. All three have been absent without leave, but temporarily returned in Spain.

Sevilla are still favourites to qualify despite their late setback, and should have sealed the tie long before Vardy’s goal. Joaquin Correa spurned the penalty he earned after a rash Wes Morgan challenge, and Jorge Sampaoli’s team had 23 shots in total. Sampaoli, sat in a box in the stands while serving the last game of a touchline ban, kicked the walls in anger like a drunken, angry mime artist.

But Leicester do have a chance, and that’s all they came for. If they were fortunate, for the first time in far too long they created their own luck. “We showed fight,” an emotional Ranieri said after the game. “When we play with this character, the luck comes to your side. We have to keep going.”

Speaking before the game, Ranieri insisted that the last-16 tie could be a turning point in Leicester’s season, but that message has been repeated so often he has become the manager who cried wolf. “If we win, something could change,” was the Italian’s plea. “We need one match like this.”

Ranieri may have been hoping for victory, but he was demanding valour. At times during the first half, that courage of conviction looked as absent as it ever had. Yet in their darkest hour, a glimmer of light. Hope springs eternal.

Jamie Vardy
No shot on target or goal since December 10, but Vardy was finally in the right place at the right time. Somewhere in Hollywood, a film director just woke up from hibernation.

Diego Simeone’s Atletico Madrid
More clearances, headed clearances, tackles and interceptions than any other team this week. This is Simeone’s all-action machine, brawn blended with beauty. While Barcelona fall and others wobble, don’t discount Atletico from reaching the final again this year.

Radamel Falcao
Yes, he missed the penalty at 2-1, which may well have been the pivotal moment in this tie. But there were times over the last two years when we wondered if Falcao would ever again be able to run in a straight line without either falling over his own feet or damaging a knee held together by sawdust and spittle.

If Ligue Un is the perfect rehabilitation home – just ask Hatem Ben Arfa – then Falcao is the poster boy of the wellness campaign. In 90 minutes on Tuesday, he scored more times in Manchester than during his entire time at Old Trafford.

Falcao now has 24 goals for the season. His chip over Willy Caballero was the naughtiest thing he has done since wearing these joggers.

Leroy Sane and Raheem Sterling
Two goals, two assists, four shots, three chances created and seven completed dribbles between them tells you all you need to know about Manchester City’s pair of wonderful wingers. At the ages of 21 and 22, thinking about how good they could they be in two years makes me tingle and squirm.

Kasper Schmeichel
Leicester’s best individual performance of the season, and a necessary one too. Schemeichel has been far from faultless during this barren run, but merits kinder treatment than his teammates. Which clubs are lining up a summer move?

Sergio Aguero
Our early winner. When you make 29% of your tackles for the season in 87 minutes, you’re trying to send a message to your manager. Pep Guardiola should be rightly pleased with his own powers of motivation.

Yaya Toure
You could surmise that Toure’s presence as the most defensive midfielder against the best counter-attacking team in Europe was tantamount to professional suicide, but Toure still comes out of this one a winner. Having not even made the Champions League squad for the group stage, he played 90 minutes of City’s first knock-out match. Talk about coming in from the cold.

Steven N’Zonzi
No player in the competition created more chances than a defensive midfielder who has become one of the hottest properties in European football since leaving Stoke.

Kevin Mbappe
This kid only turned 18 in December.

That's why I really want to have Mbappe at Liverpool. His talent and potential are incredible.#LFC #Monaco pic.twitter.com/LoCNPkmw6N

At that age I was troubling myself too frequently, listening to The Strokes on loop and persuading myself that I could re-brand as a cool, hip guy at university. Top tip: Nobody cool actually uses the word ‘hip’ anymore.

Fernando Torres
A goalscorer in the Champions League’s knock-out stages for the third time in four seasons. The consistency may have been lost forever, but Torres’ value to Atletico remains.

The general population
Sarah Winterburn was absolutely right in her post-match piece on Tuesday. Manchester City vs Monaco was one of the best games I have ever watched, and yet most of the country missed out. Please can we at least bring some Champions League knock-out games to the masses before the interest in the competitions drifts away completely? Live football on terrestrial TV has become an alien concept.

Fail to do so, and a European Super League becomes akin to the privatisation of the NHS, with UEFA telling us change is necessary because the product is broken while simultaneously holding the lead pipe behind their back.

Porto
And that’s why you should have finished above Leicester in the group stage. While Claudio Ranieri’s side were able to escape from Seville with a fighting chance of progression, Porto do not have a hope. The once great over-achievers of European football will now have one Champions League quarter-final appearance to show for their last eight seasons.

Joaquin Correa
Missed the penalty that might yet prove costly to Sevilla. Hopefully it wasn’t a Correa-ending mistake.

Alex Telles
Any player that gets booked twice in two minutes deserves a shoeing from their manager, but when it happens on the stroke of half-time with the tie poised at 0-0, frustration reaches boiling point.

“In the Champions League, the referee could’ve made a different decision,” Nuno Santo said after the game. “But this will help us grow as a team.” I only hope he didn’t bury his head in the sand just as much in private.

Willy Caballero and Danijel Subasic
This might seem harsh on Caballero, who made a penalty save and another superb stop with his feet, but the statistic still stands. On Tuesday evening, there were 12 shots on target in total, eight of which ended as goals. Claudio Bravo was presumably watching from the bench with a familiar feeling.

But really, Danijel Subasic
It was not quite Massimo Taibi-esque, but it was not far off. Sergio Aguero’s shot towards goal was not just straight at Monaco’s goalkeeper but also not hit with any great venom. For Subasic not to hold onto it is one thing, but to allow it past him and into the goal another entirely. If that moment revitalised Manchester City and Aguero, it might have cost Monaco their chance of qualification.

John Stones and Nicolas Otamendi
Our early losers. The more Manchester City spend on central defenders, the worse they get.

Djibril Sidibe
Conceded five fouls, was shown a yellow card and could easily have been sent off. There is plenty to love about this Monaco team, but Pep Guardiola used Sane to expose the defensive weak link. Sidibe’s dizziness has only just dissipated.

Bayer Leverkusen
As with Leicester, the Champions League was the last chance of Leverkusen saving their own season. Having finished in the top four in each of the Bundesliga’s last four seasons, and in six of the last seven, Roger Schmidt’s side are currently eighth. If Europe was the perfect distraction, Atletico Madrid’s attack had other ideas. You simply can’t defend with such disorganisation and hope to progress.

Aleksandar Dragovic
Made a mistake for the second Atletico goal and conceded a penalty for the third. The last time I remember seeing Dragovic play was in Euro 2016, when he was sent off against Hungary and then missed a penalty in the defeat to Iceland. I’ve sent a letter to his family promising I won’t watch him again.