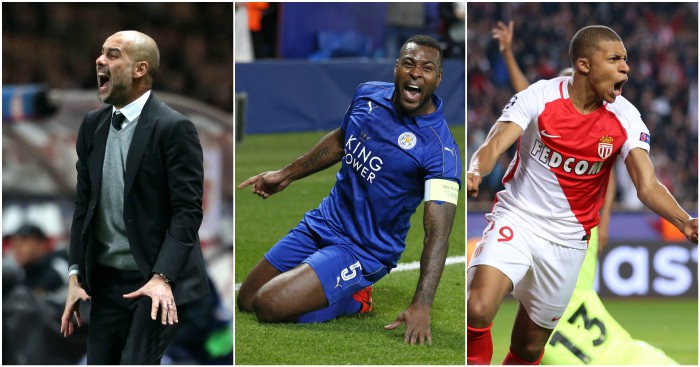 Leicester were the beneficiaries of a kind group stage draw, although that is at least related to earning a place in Pot A. They were given a kind last-16 draw too, although Benfica and Bayer Leverkusen were other potential opponents. Yet to turn around a first-leg deficit (and one that should have been far greater) in their first ever knock-out home game is remarkable.

Some may continue to mistrust a group of players who are now performing at their highest level again, but Tuesday evening demonstrated the power of motivation and hunger in adversity. It is the job of the manager to ensure that motivation and hunger remains as high as possible. That is the job Claudio Ranieri had stopped doing, and Craig Shakespeare is now succeeding at. Which brings us to…

Craig Shakespeare
Our early winner, and how. The fourth game of his managerial career was a Champions League knock-out tie, and he dealt with it like the most experienced of coaches. Anyone still believing Leicester weren’t right to make the change are guilty of wilful blindness.

Riyad Mahrez
Had the second most touches of any Leicester player, and created four of his side’s seven chances. This is the Mahrez who took games by the scruff of their neck last season, and Leicester are infinitely better for it. He is punching below his weight.

Wes Morgan and Marc Albrighton
I can probably be accused of soppy sentimentality (again), but it was wonderful that Leicester’s goalscoring heroes were not £30m signing Islam Slimani or £15m central midfielder Wilfried Ndidi. In 2012, Morgan was playing for Nottingham Forest in the Championship. In 2014, Albrighton was released by Aston Villa. These are the stories of redemption that make me so chuffed for Leicester’s players.

Juventus’ ridiculous home form
If not unbeatable, pretty close. Since drawing 0-0 at home to Borussia Monchengladbach in October 2015, Juventus have played 41 competitive home games in all competitions. Massimiliano Allegri’s side have won 38 of those, and drawn the other three. Once again they are the dark horses of this competition, and once again no team will fancy facing them.

Monaco’s young stars
As I wrote after Wednesday evening’s game, there is something slightly unsavoury in the reaction to a European team coming of age. It’s entirely understandable, but the transfer culture of the Premier League means that the first thought is to wonder how quickly a high-performing team will be broken up, and where the component parts will be shipped.

Firstly then, let us bask in their triumph. It was in 2014 that Monaco vice-president Vadim Vasilyev announced that the club would invest in their academy rather than attempt to keep pace with the spending of Paris St Germain. It would go back to what it knew.

Monaco’s La Turbie academy has always been successful. Thierry Henry and Emmanuel Petit in England, Lilian Thuram in Italy, Yannick Carrasco in Spain and many more in Ligue Un, including Gael Givet, Sebastien Squillaci and Layvin Kurzawa. Yet now, with Russian money greasing the wheels, Monaco have produced the best current crop of young players in Europe.

Kylian Mbappe is the poster boy, the 18-year-old striker touted to follow in Henry’s footsteps and become a true star of world football. Yet he is joined by Valere Germain and right-back Almamy Toure as academy graduates. They are equally excited about Franco Antonucci, Moussa Sylla and Adrien Bongiovanni; the next crop are already waiting to impress.

Crucially, La Turbie is not just about signing players at 15 or 16, but a club culture into which young professionals want to buy. Aided by a formidable scouting network, Leonardo Jardim has created a squad of young, energetic, hungry players. Centre-back Jemerson joined from Atletico-MG for £9m, Fabinho was signed from Rio Ave in Portugal for £5m at 21, Tiemoue Bakayoko arrived from Stade Rennais for £7m at 19. Even the two stars, Bernardo Silva and Benjamin Mendy, cost less than £25m combined.

Yet even with Monaco’s relative wealth, they will not be able to keep this squad together beyond this season. This is a club that exists in a bubble, but one that cannot sate the competitive desires of those who will have their heads turned by Barcelona, Manchester United, Manchester City, Bayern Munich and even Paris St Germain in their own league. Until then, we should just enjoy the show.

Atletico Madrid’s defence
Since losing the final in 2014 to city rivals Real, Atletico Madrid have played 31 matches in the Champions League. In those 31 games they have conceded just 16 goals.

Even more impressively, since losing that final Atletico have kept clean sheets in 65% of their European games. They haven’t conceded a home goal in their last eight home knock-out games. That is sensational.

Diego Simeone
Simeone may have issues in La Liga, where Atletico have failed to mount a meaningful title challenge, but he continues to take his club to new continental heights. Atletico have now qualified for the Champions League/European Cup quarter-finals for four seasons in a row for the first time in their history.

Jan Oblak
“He shows it time after time and he did so again in this game. He is the world’s best,’ said Antoine Griezmann after Oblak’s latest heroic save. Atletico Madrid’s defence is watertight, but so too is the man stood behind them.

This is quite ridiculous from Oblak pic.twitter.com/wTrumGoeFz

Pep Guardiola
“All managers make mistakes but I don’t think it was down to a tactical mistake,” said Guardiola after watching his City side limp to a 3-1 defeat. “It’s simple. The difference was between the first and the second half. In the second half we tried to win the game, we tried to play. I did it all my career in that way. But the problem was the first half. We weren’t there.”

Guardiola might well be right in general, but was surely wrong to say that there was nothing tactically wrong in Manchester City’s Champions League exit. In the first half, Fernandinho was drowning on his own in central midfield as Monaco streamed forward, and Guardiola must have expected an early onslaught from the home side.

City’s manager was right that his side improved in the second half, but the improvement was at least partly because Kevin de Bruyne dropped deeper to support Fernandinho. Before then, City effectively played with 4-1-5 formation without the ball. As soon as possession was won, Monaco stuck tight to Fernandinho and David Silva, cutting off the supply to midfield and forcing defenders and goalkeeper to hit the ball long or down the channels. Neither tactic was successful.

Those writing that Guardiola’s tenure is now ‘under scrutiny’ are well wide of the mark. Manchester City were planning for Guardiola’s arrival long before it came, and they will not rip up those plans because of one early exit from the Champions League. If City are still in the same position domestically and abroad this time next year, then the pressure will be on.

Yet what Wednesday did do is emphasise that this is the toughest assignment of Guardiola’s managerial career, and highlight the gaping holes in City’s squad. A summer of clearing out and re-stocking the cupboards awaits.

Sergio Aguero
For all City’s bluntness in the first half, they did have enough chances to seal this tie before Bakayoko’s late header. If Aguero isn’t going to impress Guardiola enough with his all-round game to wrestle back his starting spot from Gabriel Jesus, he at least needs to finish the chances that come his way.

Kevin de Bruyne
The spark of magic in the first half of the season has gone. De Bruyne is one of a number of Manchester City players who look half-knackered.

Gael Clichy and Bacary Sagna
You can read more about our early losers here, but the main conclusion is this: They were unfit for purpose in 2015; it’s 2017 now.

Premier League
Between 2006 and 2011, 16 English teams reached the Champions League quarter-finals. In the six years since, only five have. That is the headline statistic.

We do not need the root-and-branch review that inevitably follows every English sporting failure. None of the English teams that competed in this season’s Champions League have ever won the competition before, and none were among the top four favourites to lift the trophy this season. Manchester City’s lack of progress was surprising, as was Tottenham’s, but hardly shocking. Monaco accounted for both, and they are a wonderful team.

In fact, that headline statistic says more about the recent decline of Liverpool, Manchester United and Chelsea, the three English clubs who have lifted this trophy in the Premier League era. Real Madrid, Barcelona, Juventus and Bayern Munich have all suffered their own dips in the last 25 years, and now the Premier League’s historically most successful clubs are doing the same. When they rebound, so too may our performances in the Champions League.

Yet that does not mean this is no cause for concern. The Premier League’s clubs have never had more disposable income in comparison with their European counterparts, but they are not bridging the gap.

Plenty are guilty of overestimating British-based players just as they are British players in general, but it is still reasonable to expect Tottenham to outperform Bayer Leverkusen, Manchester United to outperform PSV Eindhoven and Wolfsburg, Liverpool to outperform Basel and Manchester City to outperform Monaco, given the resources. All of those things have failed to happen in the last three seasons of the Champions League. Must do better.

Samir Nasri
There is a train of thought that Nasri was treated badly in England, criticised by the media more than he merited. Since moving to Sevilla, he has indeed been excellent.

A chance on Tuesday, then, to prove those doubters wrong, and demonstrate that you’re not petula… Oh, you’ve headbutted someone.

A chance after the game, then, to prove those doubters wrong, admit you were stupid and mov… Oh, you’ve said this: “For me he’s a cheat because if he was a foreign player you, the English press, would be saying he’s a cheat. For me he is a cheat.”

Jorge Sampaoli
Forget the ‘hipster’ nonsense, but still a hugely disappointing night from Sampaoli and one that may yet damage his future career prospects. If Barcelona are after a manager who won’t wilt in the away legs of Champions League ties, this was not a good audition.