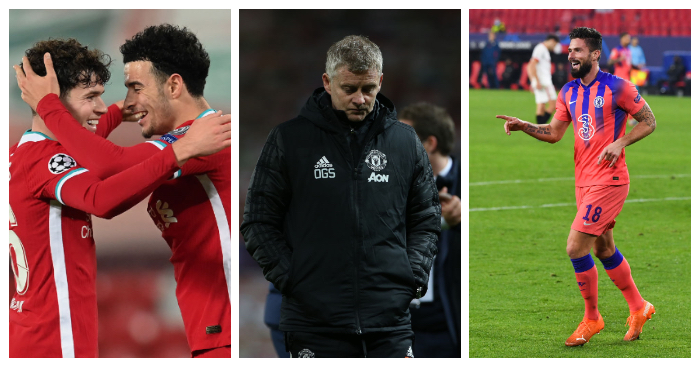 Olivier Giroud
“Lampard’s got a problem,” said Jermaine Jenas on commentary. He was referring to the selection quandary the Chelsea boss now faces: Olivier Giroud or Tammy Abraham.

It should be an easy decision. Abraham’s performance against Tottenham was clumsy, rash and frantic, while Giroud was serenity personified in a near flawless display against Sevilla.

It was as pure and varied a perfect hat-trick as it’s possible to score. The first was a delightful curled left-footed sweep into the far corner after a quick touch with his right. The second saw him sit a Sevilla defender down with a dummy before dinking the goalkeeper with his right. The third was a vintage cushioned, glancing header.

34y 63d – Olivier Giroud is the oldest player in Champions League history to score a hat-trick, while he’s the oldest to do it in the European Cup since Real Madrid’s Ferenc Puskás in September 1965 (38y 173d v Feyenoord). Glorious. pic.twitter.com/vNRBGACFm6

His fourth – a penalty smashed into the top right corner – was followed by his withdrawal, surely with Saturday night’s clash with Leeds in mind. No striker in world football could have bettered Giroud’s performance and if that wasn’t enough to force his way into this Chelsea team this season, nothing ever will be. To ignore that could be a treacherous precedent for Lampard to set.

Liverpool
Liverpool are joint top of the Premier League and have now safely won their Champions League group having barely hit their stride this season.

Between Jurgen Klopp’s cloak-and-dagger media antics, Diogo Jota’s stunning start and Virgil van Dijk’s injury, Liverpool’s actual performances on the pitch have been of secondary importance, or quaternary if you’re being picky.

They haven’t been great and they weren’t great again against Ajax. Most pleasing for Klopp will be the role of the young replacements in the victory.

The now globally-renowned Caoimhin Kelleher didn’t make any particularly outstanding saves but by simply not being a madman his place as No.2 should now be secure ahead of Adrian. Neco Williams had possibly his best game for Liverpool, was tidy on the ball, progressive without forcing it and crucially didn’t try to be Trent Alexander-Arnold. And the boy Williams assisted for the Liverpool goal – Curtis Jones – was assured and so impressive once again.

The finish with the outside of his foot from a tight angle was delightful and his all-round game belies his tender age. The cocky 19-year-old can be seen shouting at teammates; cajoling them into positions. His awareness of space, the runs to make and not to and his ability to use the ball quickly, efficiently and effectively should now put him above Naby Keita and Alex Oxlade-Chamberlain, injury issues aside.

Both Keita and Oxlade-Chamberlain – when fit – have a tendency to drift in games. An affliction that doesn’t hamper Jones. Perhaps it is that arrogance – perceived or real – that means he’s always desperate to be involved, to prove he’s the best player on the pitch, even when he rarely will be.

Barcelona
They played some sumptuous football in the first 30 minutes to put the game to bed and maintain their 100% record. Antoine Griezmann’s opener was beautiful.

RB Leipzig
They survived a scare. Had they not beaten Istanbul Basaksehir they really would have been kicking themselves. But Alexander Sorloth’s 92nd minute winner means Manchester United remain very much on the hook. Julian Nagelsmann’s side have won all seven of their home games this season; they’ll be feeling very confident as they welcome United on Tuesday.

Malang Sarr
The centre-back has helped Porto keep five clean sheets in his seven outings, including three in four Champions League games. Chelsea have already made a £2million profit by loaning the 21-year-old to the Portuguese side having landed him on a free transfer in the summer. And he looks the business.

Marseille
A win after 13 Champions League defeats on the bounce. Dimitri Payet scored his first and second goals in the competition, both from the spot, to secure a 2-1 victory.

Romelu Lukaku
His flick was crucial to Matteo Darmian’s opener; his brilliant hold-up play presented two great opportunities for Lautaro Martinez; his first goal was a stunning right-footed drive across the goalkeeper and his second a relatively simple left side-foot into the corner. It was a performance close to Giroud levels of brilliance.

Stephanie Frappart
She became the first woman to referee a men’s Champions League game as she took charge of Juventus’ 3-0 victory over Dynamo Kyiv. Kudos, Stephanie.

Tonight, many young girls all over the world have dared to dream that one day they too can be like Stephanie Frappart. That this can be the norm & not the exception.

An image that as a little girl, I, never saw. Today that became a reality 👏🏾
pic.twitter.com/f0Rhm0bxq4

It was a feeble sentiment shared by Rio Ferdinand and Paul Scholes on the BT balcony: they too were bizarrely, overwhelmingly positive after a 3-1 home defeat. Scholes looked as though he’d just awoken from a football daze, in which backheels, chips and flicks that didn’t result in goals had suddenly made him forget about his own career at Old Trafford and everything he’s said as a pundit since.

Where was the harping about United DNA, or the history, heritage, pedigree nonsense? Just because they played pretty football between both boxes the manager and United-ites let them off the hook?

And it’s not as though on Saturday, if they lose, draw or even win while playing poorly against West Ham, those same pundits won’t be picking up the Sir Alex Ferguson engraved baton from the floor and start hitting us over the head with it again. Are we to now accept that the United DNA isn’t about winning at all, but entertaining while losing? That sounds more like the West Ham way, if anything.

Perhaps searching for some warranted criticism, Gary Lineker asked whether Fred – if he could be identified through the red mist that shrouded him – should have been substituted by Solskjaer. “Ahh well, in hindsight,” the two pundits replied in crazed, dreamlike unison.

Yes, in hindsight, but also in sight and foresight. Replace him with one of your two world class midfielders sitting on the bench. Force the issue, take your ascendency in the game to another level and win. Yes, win.

Even after Fred was sent off, with United losing 2-1, it took Solskjaer a further nine minutes to bring Mason Greenwood and Donny van de Beek on. And Anthony Martial should have been taken off long before the 79th minute anyway. These were some of those “deciding factors”.

United did play nice football; it was a brilliant game to watch. But as Harry Maguire said after the game to affirm that they hadn’t all lost their Red Devil sensibilities: “This is Manchester United and losing at home will never be good enough.” Thank you, Harry.

Fred
Nine out of ten referees would have shown Fred a straight red in the first half. It was far from a bar brawl headbutt, but compared to some of the forehead tickles deemed worthy of a red card it was a Carlsberg induced you-f***ing-what-mate.

It was an example of the sort of moment that VAR was brought in for; one the referee still got wrong with the advantage of a second look. It’s nice to pin the blame for a mistake squarely on the man wearing cyan for a change. Bloody refs.

At 1-0 down it would likely have been United’s death knell, but the bell did sound at 2-1, when Fred was shown a deserved second yellow card for an undeserving challenge.

Pep Guardiola
“We don’t protect the players, and that’s why it’s a disaster,” Guardiola said on November 9. “In this calendar, especially. I will demand, if the people allow, we have to come back to five substitutions. If not, it’s difficult to sustain it.”

On December 1, after Manchester City drew 0-0 with Porto to confirm their qualification as Group C winners, Guardiola said: “I didn’t make substitutions (because) I think (players need) to play into rhythm.”

So, on top of his vexing complaints about footballers playing football and the need for five substitutes instead of three in the Premier League, he then only uses one when he’s allowed five. You can “demand” what you want Pep, you’re not helping yourself.

Other than Sergio Aguero, who’s almost back – City currently have a fully fit squad. While other managers can viably – if tediously – complain about “a disaster”, Guardiola cannot.

Zinedine Zidane
Tickers has got this.

Atalanta
A win over group whipping boys FC Midtjylland would have seen them safely through to the last 16. The 1-1 draw now means they have to avoid defeat away to Ajax to secure their qualification. Silly Atalanta.

Bayern Munich
A draw for Bayern’s second string against a full-strength Atletico side who are second in La Liga after six wins in a row should probably make Hansi Flick’s side winners again. But this may be the last opportunity we get to stick the losers label on this incredible side. Loooossseeerrs.