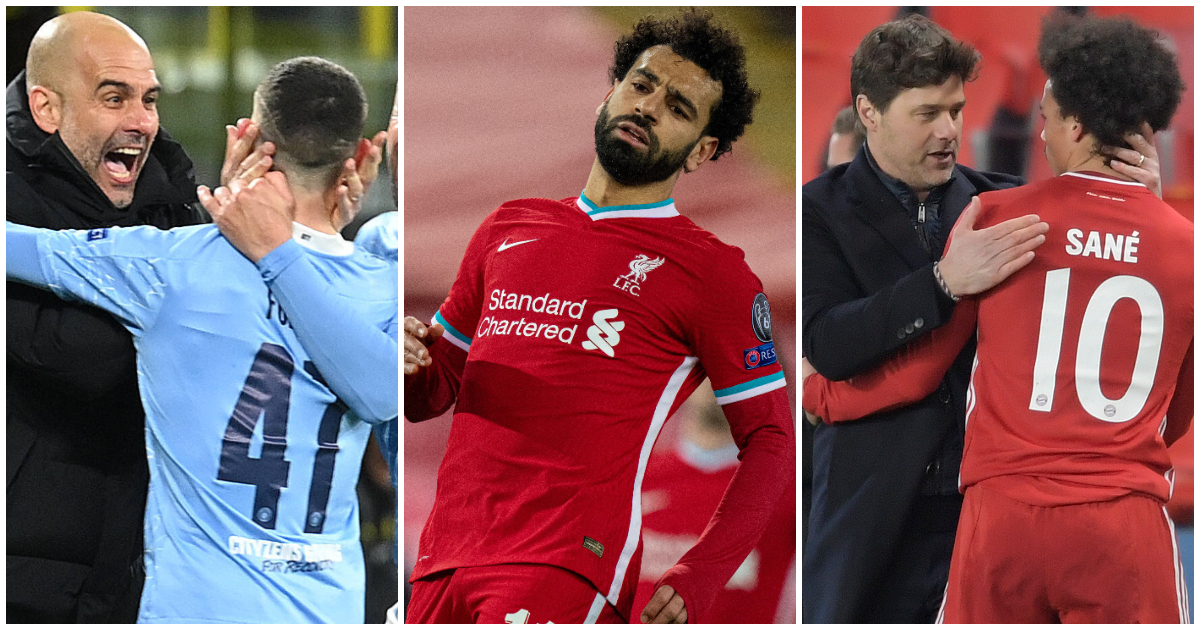 Jude Bellingham was a winner and a loser. But Phil Foden came of age for the 427th time, while Chelsea showed they can adapt…

Manchester City
They never panicked. The players kept faith, despite being bound at one point for yet another quarter-final exit, and Pep Guardiola did not waver. A first Champions League semi-final together is huge. And what a semi-final!

Jude Bellingham
Pep wants to see his birth certificate. And his concerns are valid after Bellingham’s performances over both legs of Dortmund’s defeat.

If his documentation checks out, Bellingham is now the youngest English scorer in the Champions League, with his early strike putting Dortmund in the ascendancy for 40 minutes of the tie.

His third Dortmund goal – it should have been his fourth – was the crowning moment of another performance at the heart of the Germans’ midfield that left Guardiola and everyone else drooling.

Bellingham’s composure on the ball shames veterans twice his age and the intensity in his passing and pressing suggests Roy Keane was right to claim that the 17-year-old could already be “a complete midfielder”. He was everywhere, opening the scoring at one end before denying City at the other with a goal-line clearance to make Mahrez wait for his equaliser.

The talk around Bellingham’s European Championship prospects seems to suggest that this summer’s tournament comes too soon for the teenager. Which is an easy way to avoid the awkwardness of dropping someone else. But he certainly looks ready now so why wait?

Phil Foden
The boy from Stourbridge shone but it was the Stockport lad who, once again, made the most telling contribution.

This was Foden’s latest coming of age moment. The second in eight days and 427th overall.

His celebration of a 75th-minute strike, an earlier winner than his oh-so-crucial goal last week, was the biggest endorsement yet for Guardiola’s handling of City’s prodigious talent. Upon sealing City’s first semi-final berth of Guardiola’s reign, Foden made a beeline for the manager before being swamped by everyone else.

With Bellingham and Foden in this form, Gareth Southgate is the real winner.

Oleksandr Zinchenko
Guardiola’s only change to his XI from last week was Zinchenko’s inclusion at the expense of Joao Cancelo. It was a selection with more than a hint of caution on the manager’s part, and so it transpired.

Zinchenko sat in a more conventional left-back role, resisting the urge to step into midfield with the regularity that Cancelo so often does  to create the overload. But Zinchenko helped to halt, or at least slow down, Dortmund’s breaks, especially after City were made to chase a goal following Bellingham’s opener.

The Ukraine international is certainly capable of stepping up and inside, but this was a test of his more pragmatic qualities. He passed with flying colours.

Thomas Tuchel
The concession of an added-time stunner aside, this was as close to perfect for anyone in need of a dull second-leg performance to kill off a Champions League tie.

Chelsea, obviously, didn’t need to chase the game and they were warned of Porto’s threat in the first leg. So after mercilessly picking Crystal Palace apart at the weekend, Tuchel’s front three got down and dirty in the muck and bullets to halt the Portuguese side’s rhythm. Christian Pulisic in particular was excellent, winning more than half of the 20 fouls Chelsea earned.

As dire viewing as it may have been for any neutral daft enough to watch this tie over PSG v Bayern, for Tuchel, it was just what he wanted to see: further evidence of Chelsea’s ability to adapt to their brief.

Jorginho
As Will Ford writes, ‘Jorginho is, in truth, a limited footballer. He’s very slow, not hugely creative, he never shoots unless it’s from the penalty spot and he’s very, very slow.’

F365 Says: Why Jorginho is Tuchel’s non-negotiable for Chelsea

Mehdi Taremi
His 94th-minute beauty was ultimately irrelevant but, as Rio Ferdinand said, a “ridiculous effort”. In terms of shinned bikeys, it’s up there with Wayne Rooney’s against City.

PSG’s stand-ins
Mbappe, Neymar and Angel di Maria were superb at the Parc des Princes, even if the hosts’ attack failed to find the goal their play deserved. Their credentials cannot be questioned. But that was not the case for many of the players behind them.

Bayern were without two of their best attackers but Pochettino was also missing his captain and defensive leader Marquinhos, giving his defence a similarly-makeshift appearance, especially in the closing stages when Bayern were attempting to lay siege to the hosts’ goal.

Idrissa Gueye
It certainly helped the back four that they were afforded the very best protection.

“Idrissa Gueye was a machine, I told him when he left the pitch,” said Pochettino of the former Everton midfielder who won more tackles than anyone else, robbing Bayern on half a dozen occasions.

This was certainly the game for Gueye. Domestically, there is not much call for a midfielder as limited on the ball as the Senegal star often is. But on the occasions PSG need a ball-winner more than a string-puller, Gueye is Poch’s man. To think PSG were happy to loan him to Newcastle in January…

To be fair, at the start of February, it did look hopeless for Real. They were 10 points behind Atletico in La Liga; they were dumped out of the Copa del Rey by Alcoyano and their Super Cup hopes had gone up in smoke.

But since then, Zidane has turned Real around, with 14 undefeated matches putting them on Atletico’s tail and only a point the difference. Their resurgence also sees them move into the Champions League semi-finals, with Zidane’s record alone making them a worrying opponent for Chelsea.

At Anfield, Zidane’s men reminded us of their European calibre. Not with a swashbuckling display of attacking football; control was the order of the day and after an early escape that was achieved as Liverpool’s belief faded with each passing minute.

Liverpool, even in their recent form, fancied themselves but in the end, Mo Salah’s second-minute sitter aside, Real rarely looked under genuine threat. Their passage to the semis once more was certainly more serene than their journey down Anfield Road. Window-smashing Liverpool fans couldn’t ruffle them, nor could their players.

Eder Militao
With Sergio Ramos off and Raphael Varane perhaps following the captain through the door this summer, Militao offered further evidence that he can be trusted following his impressive performance in Saturday’s Clasico win over Barcelona.

Casemiro
Stamped his mark all over Anfield, including James Milner’s ankle.

Liverpool
No red ribbons on anything shiny this season, then. From dominating Europe and the Premier League, the bad champions must now get their head around redefining success as fourth place.

F365 Says: Liverpool must settle for going fourth and multiplying

Mo Salah
The Liverpool striker’s goals tally is one of the few impressive feats of Liverpool’s season but his goalscoring touch deserted him at the crucial time on Wednesday.

Inside a ‘proper stadium’, the hosts carved Real open inside two minutes, with Sadio Mane teeing up Salah to get the Reds rolling. But his weak effort, under little pressure, from just beyond the penalty was hit against Thibaut Courtois’ legs.

It was Liverpool’s ‘what if?’ moment of the tie. “We know how often Mo Salah finishes these things with closed eyes. Not here,” reflected Klopp. There is no question that a halving of their advantage so early on would have given Real the jitters, as it did to Barcelona when they surrendered a goal inside seven minutes before capitulating in 2019. As it was, Real dusted themselves off after their lucky escape – their bus, disgracefully, was not similarly unscathed – and set about frustrating Liverpool, which came rather easier with a two-goal cushion.

Thiago
Benched for both legs of a Champions League quarter-final. It’s not working, is it?

Mailbox: Who’s up for swapping Thiago with Van de Beek?

Hansi Flick
Has Flick coached Bayern for the last time in the Champions League? Possibly. Probably…

The Bayern boss is the strong favourite to replace Joachim Low as Germany coach after the European Championships and as well the pull factors involved in managing his country, Flick also seems to feel pushed by a breakdown in his relationship with sporting director Hasan Salihamidzic.

The pair, with incoming CEO Oliver Kahn, will reportedly meet this week to thrash out the future and Bayern’s exit puts Flick in a precarious position.

There is little doubt Bayern have dropped off this season, but context is required. He took over from Niko Kovac in November 2019 with Bayern fourth in the Bundesliga, By the end of the season, they were Treble winners. Flick was flawless. Until recently.

Bayern are still top of the Bundesliga – if not cruising to the title – but their fortunes this season represent a backwards step. That as much as the Bayern power struggle could see him leave his post after one full season in charge.

All of us
PSG v Bayern was a treat for us all, but just imagine how good the tie could have been had it not been missing one of its biggest stars because of an absolute pisser injury.

Leroy Sane
With Lewandowki and Serge Gnabry out, Leroy Sane carried much of Bayern’s attacking threat as the Bavarians created another 14 shooting opportunities to supplement the 31 from the first leg. But the former Manchester City striker failed to supply the final product at crucial times, both with his shooting and delivery from wide.

It prompted this criticism from Mehmet Scholl: “I’m overwhelmed, I don’t know. At 25 years of age, he’s still unfinished. When do I dribble? When do I pass the opponent on which side?

“The mix isn’t right yet, he still lacks structure. He’s gotten better overall and is getting more and more understanding of Bayern Munich, but he’s not quite as far as bang in a game like Arjen Robben or Franck Ribery were.”

I mentioned on here a few weeks ago about players having their accounts run by social media companies. Lads run your own accounts! Your independent thought and authenticity is at stake . It’s your voice , not anyone else’s. Morning by the way . Go and attack the hell out of it ❤️ pic.twitter.com/M997r8kbWa

Just do it yourselves lads.