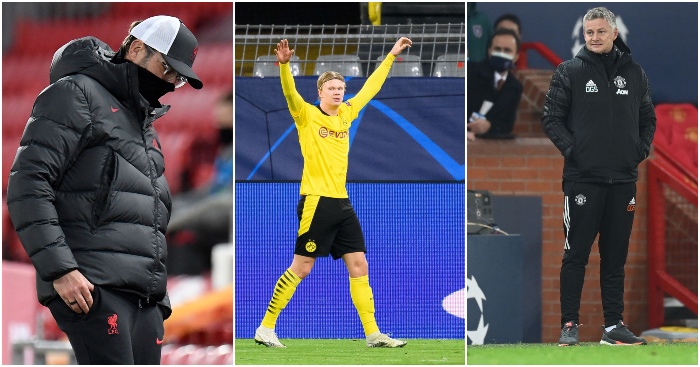 Chelsea
“You’ve got to be playing really well to get in, and stay in this Chelsea team,” Glenn Hoddle said in commentary. “That’s great for Frank.”

That’s a crucial difference between this season and last. The two goalscorers, Callum Hudson-Odoi and Olivier Giroud, will not be starting against Tottenham on Sunday. Nor will Cesar Azpilicueta, who was at his typical combative best, or Jorginho, who controlled the game when Chelsea were in the ascendency and defended smartly when they weren’t.

They all played well, but not well enough to oust the glittering talent starting in the Premier League. Frank Lampard bringing on Giroud, Kai Havertz, Hakim Ziyech, N’Golo Kante and Reece James is as clear an illustration of Chelsea’s ridiculous squad strength as anyone would require.

When those players aren’t playing, there is bound to be slight dip in performance levels. And it wasn’t a comfortable victory.

Chelsea did dominate the opening half an hour, with Timo Werner missing an absolute sitter before Hudson-Odoi’s goal. The work in the lead up to the goal from Mason Mount was so very Mason Mount. He harried and hassled the ball off an opponent, before turning and curling a beautiful ball over the top, straight into Hudson Odoi’s path, with Lampard on the touchline and Gareth Southgate at home thinking: that’s why.

But a young Rennes side will feel hard done by, particularly after deservedly equalising in the 85th minute, only to see a mountain of a Frenchman leap almost comically high to head in an injury-time winner.

Lampard has now got this squad exactly where he wanted them a year ago: “on edge”, fighting for places. Chelsea haven’t got past the last 16 in any of their last four Champions League campaigns. They look far better equipped to go deep this time.

Marcus Rashford scored a goal that was ruled out for offside which showed exactly what United are capable of with Edinson Cavani and Donny van de Beek in the side.

Van de Beek from deep, played a ball into Bruno Fernandes, who flicked it round the corner and got it immediately back from Cavani, before the Portuguese playmaker slipped what seemed an impossible ball through to Rashford on the right to slip it under the goalkeeper.

It was quick, inventive and beautiful, and one of many examples of similar dynamic, eye-catching football that made them a pleasure to watch, rather than the drudgery experienced when they play two holding midfielders, three wingers and no proper striker.

Sometimes (most of the time), playing your best players is the best way forward.

Erling Haaland
His brace in the 3-0 win over Bruges meant he became the fastest player to score 15 Champions League goals. 12 games it took him – seven fewer than the previous record held by Ruud van Nistelrooy and Roberto Soldado. Brazilian Ronaldo and Zinedine Zidane managed 14 each.

This, however, is not true…

Haaland has taken 91 shots in his professional career. He has scored 70 goals. What the actual f*ck.

This season alone he’s had 60 shots, and scored a frankly pathetic 22 goals. Even in terms of shots on target, the claim doesn’t ring true.

Still, for those of you jonesing for a bonkers Haaland stat, there are plenty:

Bruno Fernandes
“When the team scored I score too,” Bruno Fernandes said when asked why he let Marcus Rashford take the penalty when he was on a hat-trick. He may not be from the Rio Ferdinand school, but he’s definitely a leader. He can hit a ball, too…

Phil Foden
He completed more dribbles (3), made more key passes (4) and had the most shots (6) of anyone on the pitch. He was the best player by a distance and Raheem Sterling was pretty good.

Man City have cruised through their group (admittedly an easy one) with Foden key to three of their four victories. Any attempt to transfer their European form to the Premier League should see his constituent part moved with it.

The time for Foden circumspection is over.

Bayern Munich
Their 3-1 win over Salzburg means Bayern have now won 15 Champions League games in a row, scoring 43 goals and conceding eight. Not entirely sure why any other team is bothering.

Martin Braithwaite
Tony Pulis described Braithwaite as “ungrateful” for saying he could not imagine returning to Middlesbrough after a loan at Leganes and he was accused by many of “not trying” during his time on Teeside.

It was his less than impressive spell at Middlesbrough that provoked the mass hilarity on social media when it was announced he would be joining Barcelona. Braithwaite won’t care – he’s laughing now.

It may only have been Dynamo Kiev, but two goals and an assist on your first ever Champions League start is pretty good going. Eat my goals, Tony.

Alvaro Morata
His injury-time winner means the former Chelsea namby-pamby makes the winners section for the third time this season. He came off the bench to score his fifth and Juventus’ eighth goal of the competition to secure their path into the last 16.

Despite their early qualification, Juventus have stumbled through the group stage in truth and are stuttering in Serie A. Andrea Pirlo appears to be throwing players (very good players) on the pitch in any combination at the moment and will need more of a strategic outlook to go any further.

Ryan Gravenberch
What the youth can do…

I know behind-closed-doors football is terrible and everything, but that is the greatest combined sound of boot + ball + net I have ever heardpic.twitter.com/THc3rclj0n

Ciro Immobile
…the old guard can do better.

What a hit from Ciro Immobile!

The goalkeeper could only stand and watch 🚀 pic.twitter.com/Uwrd3LIGtp

Jurgen Klopp
His side remain in control of Group D and the 2-0 defeat was met with a collective shrug of the shoulders from those on commentary and in the BT Sport studio, as was the case for those of us watching at home. It doesn’t really matter.

Jurgen Klopp will stand by his decision to rest key players. With the early kick-off against Brighton this Saturday, he targeted this game as the one to shuffle his pack. Their next Champions League game against Ajax could have been another opportunity to do so had they beaten Atalanta, but with that game on Tuesday before a 3pm kick-off, there is less of a need to do so.

But a win would have provided welcome breathing space that Chelsea, Man City and many others can now enjoy, from a suffocating fixture list that Klopp and his side will now have no respite.

He now can’t afford to play anything but his full strength team against Ajax, having watched half of that first XI fail to get anywhere near the levels we now take for granted with some distinctly average backups making up the numbers.

Inter were 1-0 down at that stage and went on to lose 2-0. They sit bottom of Group B, five points off Madrid in second with a tough game away at free-scoring leaders Borussia Monchengladbach next up.

Vidal, Antonio Conte and Inter may well have f***ed it.

Shakhtar Donetsk
Two points clear at the top of the table after a memorable win away to Madrid and a gritty draw at home to Inter, they have now conceded ten goals without reply in their double-header against Monchengladbach and face the very real prospect of finishing bottom.

RB Leipzig
Julian Nagelsmann’s side had 62% possession and 15 shots to Paris Saint-Germain’s eight at the Parc des Princes, on a night in which victory would more than likely have seen them safely through to the last 16.

As it stands Group H is one of the few with genuine remaining jeopardy. Leipzig and PSG will likely both beat Istanbul Basaksehir to reach nine points, making their other fixtures against Manchester United – also on nine – particularly tasty.

Andre Villas-Boas
After Andre Villas-Boas was ‘begged to stay’ by his squad after an impressive first season in charge, that decision may be taken out of his and their hands after an embarrassing Champions League campaign. They’ve lost all four games and scored no goals.