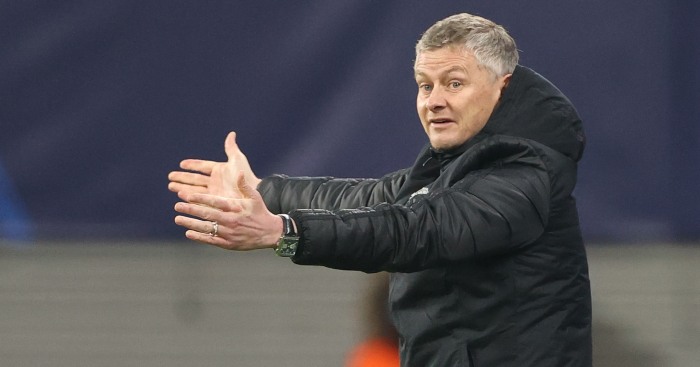 Demba Ba, Istanbul Basaksehir and PSG
Our early winners. It feels glib to call them winners when it goes so much further than that and means so much more. But this really feels like a huge moment in our sport.

While it is obviously being deployed as a bad-faith deflection by some, there is certainly a worthwhile debate happening right now around whether taking the knee for BLM and in opposition to discrimination is still working. Is the gesture in addition to meaningful action or in lieu of it? This, of course, is what Les Ferdinand was talking about when he called for an end to the practice, before his thoughtful and considered words were wilfully misconstrued by those looking to defend the indefensible at the weekend.

If however, you’ve been having that debate in good faith, then you should applaud Tuesday’s direct action. Two teams, including one of the continent’s heavyweights packed with superstars, took the collective and decisive decision themselves that they would not stand for it. Demba Ba’s views on Marxism remain weirdly unknown, however.

His brilliance has become so normalised that any slight deviation starts being treated as a worrying drop in form, while maintaining it as he has this year with 12 goals across 16 Premier League and Champions League games can pass almost without comment.

Shakhtar Donetsk
All evidence from the San Siro suggested that a team who beat Real Madrid home and away was determined to very carefully ensure they qualified for the knockout stages of the Europa rather than Champions League. Up to them, and having got what they evidently wanted, who are we to call them anything but winners?

But the rest of us all lose out. Sport requires jeopardy and the Europa League safety net in the Champions League group stage robs us of it.

Shakhtar decided that the rewards for a draw exceeded the rewards for a win, especially once the cost of a defeat was factored in. They might not be wrong, but the system that creates that situation certainly is.

Take that Europa League spot for third-placed teams away, and you’d have been left with two teams who both needed a win to qualify. Pretty confident we would have got a better match out of it.

The problem is that the Europa League safety net is all too often not a safety net at all. It was designed to do what it’s just done for Manchester United – keep the big clubs in Europe for as long as possible – but too often ends up applying to teams whose ambitions are inevitably a little lower. It becomes a viable target in itself rather than a consolation prize. Shakhtar Donetsk made the decision that they would rather finish third than second. No blame should come their way for making that decision, but they should absolutely be the last team that ever gets to make it.

Real Madrid
What was everyone worried about? Having somehow kept themselves just about in contention across five games spent in near-constant flirtation with catastrophe, Los Blancos sauntered to top spot in their group with the very easiest of wins in the very weirdest of matches.

Borussia Monchengladbach
Played for a draw and got it, 700 miles away. However mystifyingly tame their final performance of the round was, still deserve huge credit for emerging from such a difficult group. But the flakiness that put their qualification in jeopardy and the way they absolutely froze in Madrid will be noted by whichever group winner awaits in the next round.

Karim Benzema
Will probably be kicking himself for failing to accept the hat-trick that was on offer, so frequently was the France striker given the freedom of the Gladbach penalty area, but his two first-half headers not only saw Madrid into the knockout stages but also took his tally for the club past 250.

Manchester City
In stark contrast to their Premier League travails, that was all very lovely and very straightforward. A kind draw was fully exploited, City cruising serenely into the last 16 with 16 points out of a possible 18 – a total matched only by defending champions Bayern – and not a single goal conceded in their last five games.

Lovely in and of itself, potentially even more significant down the line. In this monstrously difficult, congested season, strolling through to the last 16 of the Champions League in third gear could be City’s saviour.

Sergio Aguero
Stepped off the bench to score just his second goal of a season so far restricted to 110 goalless minutes of Premier League football and some European scraps.

His last Champions League goal, against Porto in October, was followed immediately by another injury blow the following weekend. For his and City’s sake, let’s hope for better this time around. The Premier League is a strange place indeed without Aguero’s name on the scoresheet.

Atalanta
They’ve done it again. Last year’s surprise package are through to the knockout stages once again thanks to a late winner at Ajax. They qualified by winning all three of their away games (without conceding a goal) and none of their home games (conceding eight goals) which only adds more evidence to last season’s hints that this is a tremendously fun team to have around the competition even if (and also because) it does annoy the sniffy and pompous super-clubs who think it should really all be just for them.

Atletico Madrid
A good win in Salzburg to ensure no disaster in a trappy group, and now undoubtedly the second-placed team all the group winners will want to avoid in the last-16 draw. And that’s despite Barcelona also finishing second in their group.

Ole Gunnar Solskjaer
As Daniel Storey put it during the last bust of United’s freewheeling boom-and-bust cycle, the calibre of player at Manchester United provides a natural floor to just how bad things can get, but the current manager provides a natural ceiling.

Manchester United’s players
And that was the floor.

Manchester United’s vicious circle
And yet, United remain stuck. Nothing will really change, they are a club in, if not quite stasis, then certainly some kind of time loop. A terrible result or two prompts talk of the need for change and Mauricio Pochettino or whatever. Then some decent results come along and oh look, everything’s okay again now. And ah, another disaster. Never mind, another false dawn is just over the horizon. City at the weekend, that should be fine. And even if that goes sour a hatful of goals against a doomed Sheffield United in midweek will prove the doubters wrong. This is fine.

Things got proper bleak and broken under the previous failed attempts to replace the irreplaceable Sir Alex Ferguson. Most recently, Jose Mourinho had turned the atmosphere all around the club so virulently poisonous that something had to happen. That will never happen under Solskjaer; no matter how bad things get he will never overtly goad Ed Woodward into sacking him. Whatever his faults, Solskjaer does at least seem self-aware enough to realise just how lucky he is.

And that’s a problem. Because Woodward’s reign is increasingly defined by his ability to make a lot of noise while actually taking the path of least resistance. How else to explain the summer’s failure to address obvious weaknesses in the squad while allowing all manner of deadwood to continue clogging up the place? Jesse Lingard is still technically a Manchester United player. So are Phil Jones and Odion Ighalo and Juan Mata and Eric Bailly and Marcos Rojo. That doesn’t point to the kind of ruthlessness required to get rid of a likeable but inadequate manager, especially when you’ve pinned your own colours so firmly to the mast.

United’s heroic comebacks are also becoming as much curse as blessing. It’s lovely that they are able to turn things around from difficult positions. It points to certain qualities in the squad itself. It’s bad that they’re having to do it every single game. Eventually, as happened this week, the escape act will fail. And then to add an extra layer of unhelpfulness, the thrilling yet failed comeback allows what was when you step back and consider it in the round a pretty abject collapse – United had six points from six approaching a double-header against group whipping boys Basaksehir – into something approaching heroic failure.

Solskjaer’s side has famously won every single one of its Premier League away games this season, but they’ve fallen behind in every single one. However admirable the comebacks, it surely points to something being wrong in the preparation and the set-up. The temptingly obvious comparisons to Solskjaer’s own party piece as a player is unhelpful; managers need to be able to predict what might go wrong and prepare for it in advance rather than make dramatic and thrilling interventions from the subs’ bench.

This is Manchester United: they are often sh*t.

Jurgen Klopp
If you’re going to righteously bang the drum for five subs and complain about the congested fixture list that’s fine. Just don’t then pick Fabinho and Mo Salah for the deadest of dead rubbers.

VAR
Sorry, we know you’re as bored of it as we are. Sigh. Here we go again. But even when it’s right it manages to be wrong. There were two big VAR moments in the second half of Liverpool’s game on Wednesday evening: the decision to award Midtjylland a penalty, and the decision to disallow a late Minamino winner. VAR probably just about stumbled upon the right decision both times, but viewers didn’t get to see the key evidence until several minutes later. A key criticism of VAR – but one that has for obvious reasons been less of a pressing issue in recent months – has been the way fans in the ground are too often left on the outside waiting for a decision without getting to see the evidence. Fair play for managing to replicate that experience and extend it to everyone watching on TV during these troubled times.

Inter Milan
Less than four months after appearing in the Europa League final, Inter are out of Europe altogether this season after finishing bottom of their group.

And they went out in pitifully tame style in a joyless and drab goalless draw against a Shakhtar Donetsk side that had conceded 10 goals in two games against Borussia Monchengladbach. Grim.

It will remain the case that Craig Shakespeare has reached as many Champions League quarter-finals as a manager as Antonio Conte.

Christian Eriksen
I don’t understand the science of it, but the evidence is overwhelming. All Christian Eriksen’s creative ability has somehow, presumably in some mad ungodly experiment conducted by Daniel Levy in the secret laboratory he built in the abandoned cheese room at White Hart Lane 2.0, been stolen from the Dane and given to Harry Kane.