Pep Guardiola is just the happiest boy. Garcia, Davies and Lyon, too. But Sarri, Zidane and Chelsea have f**ked it. 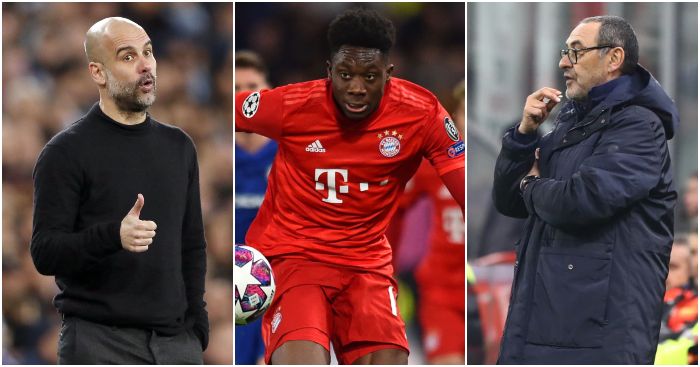 Pep Guardiola
Outside of a golf course, Pep Guardiola is rarely as happy as when he is afforded a platform to discuss tactics. While he often emits the aura of someone who would rather be anywhere else when asked about a rival manager’s comments at a pre-match press conference, his words flow far more naturally if he is given the opportunity to forensically dissect a game.

‘The worry at City was how he would handle the English press,’ Guillem Balague wrote in his 2012 biography of Guardiola. ‘Journalists would get four chances a week to talk with him. Ask about football and the problem would not be getting him to talk but rather getting him to stop. Have an agenda and he would close down completely – and when he did, who would be to blame?

‘The priority of many English editors is controversy and personalities, and questions about tactics or gameplans are scarce…Guardiola has always been more than happy to talk football but does not want to win battles, nor play games, in the press conferences.’

So to hear Guardiola speak candidly about how Manchester City decided to adapt their approach in-game based on the position of Vinicius Junior, or how Gabriel Jesus was selected due to Real’s perceived weakness defending wide attacks, was genuinely fascinating and genuinely endearing.

He more than earned that right. After years of disappointment on this stage characterised – often fairly – as overthinking, it was Guardiola who enjoyed the most lucidity of anyone in Madrid. City lost easily their most important defender to injury after half an hour, benched four of their best players and recovered from going a goal down to win in an unwelcoming stadium with a relatively unfamiliar system.

Forget one of the club’s greatest European results; this was Guardiola’s finest in almost a decade.

Manchester City
But it would be unfair to apportion all of the praise to Guardiola. The players have to carry out his plan as well as possible for it to work, and those same obstacles that have knocked City off-course before were carefully avoided this time.

Each of their Champions League exits under Guardiola have come as a result of spells in which they lost control for a short but crucial and chaotic period. Monaco scored two goals in eight minutes in the first leg and two in 21 in the second leg of their 2017 meeting; Liverpool scored three times in 19 minutes in 2018’s quarter-final first leg; four goals between them and Tottenham in the opening 21 minutes of last season’s quarter-final second leg set foundations that were always liable to collapse suddenly.

That Isco’s goal came both after a string of City chances and because of a sequence of individual City errors meant a similar disintegration could be expected. Real had three shots to one in the following quarter of an hour as Isco forced a save and Fernandinho put in some wonderful blocks.

Guardiola could do little to effect things from the sidelines at that juncture. It was down to the players.

The mental strength it took to overcome those same challenges they have failed numerous times before cannot be understated. They always had the players and the manager to win this competition. Now they have proof of the requisite fortitude and maturity that Guardiola has craved for so long.

Rudi Garcia
To beat Juventus – Cristiano Ronaldo’s Juventus – in his first Champions League knock-out game as a manager ever is some achievement. To do so in the same week that his club felt compelled to put out a press release threatening to sue their own fans for posting pictures depicting him and president Jean-Michel Aulas as clowns is something else altogether.

Rudi Garcia was only named Lyon manager in October. With previous Ligue Un finishes of 5th, 4th, 5th, 6th, 3rd, 4th and 5th to accompany the apparent outlier that was his title win with Lille in 2011, his was not a particularly heralded appointment.

Nor has it been since, with Lyon currently seventh and struggling without Memphis Depay and Jeff Reine-Adelaide. They have won one of their last five league games and are closer to the relegation places than Marseille in second.

But the Champions League could offer unlikely salvation. Lyon were not particularly elaborate in their plan to foil Juventus, with the simplicity of being well-drilled, consummately focused and organised and making few individual errors proving key.

It was only the second time since the 2004/05 season that Juventus failed to have a single shot on target in a Champions League knockout game. They lost that first tie to an Arsenal side that gave nothing away in defence. The Old Lady could be singing again 14 years on.

Alphonso Davies
It is a shame that nothing Alphonso Davies achieves in his entire career will be an improvement on his glorious Brooklyn Nine-Nine rendition – and it is still amazing that his middle name is Boyle. But it will be a joy to watch his attempts to better that over the next decade or so.

The performance against Chelsea was not even the start. He terrorised Tottenham with two assists in December and has been quietly impressing in the Bundesliga since making his debut last January.

Yet this has still been a remarkable rise. Davies made his first Bayern start against Union Berlin in October and has played all but ten minutes of their 21 matches since. To go from a novice on the fringes to a crucial regular so seamlessly and so soon is unprecedented. And simultaneously all because of Liverpool.

His apparent serenity and clarity belies the immense pressure he is under as the flag-bearer for MLS potential. Sam Wallace has written a wonderful piece in the Daily Telegraph detailing how Davies ‘has changed the way in which Major League Soccer is viewed’ – that it can now be seen as a proving ground for development instead of a retirement home of sorts.

Good luck to Davies, still a teenager with a remarkable back story, who will endure the same dips in form as any other player, as he proceeds to bear that cross. Or, going by Tuesday’s efforts, drill it for Robert Lewandowksi to score.

Lyon’s midfield trio
While Houssem Aouar – someone sign him already – was nominally posted on the left wing, the majority of his touches were central. With goalscorer Lucas Tousart stationed more on the right and the irrepressible Bruno Guimarães covering every possible blade of grass in between, the basis of Lyon’s approach focused heavily on a midfield which supposedly lost its most important member in the summer.

It was thought that Tanguy Ndombele made Lyon tick. But while he struggles to find his footing in north London, Miralem Pjanic, Adrien Rabiot and Rodrigo Bentancur were being shackled and overrun by those he left behind.

Aouar assisted the goal. Tousart scored it. Guimarães was absolutely impeccable. They are 21, 22 and 22 respectively, backed up by 24-year-old Jason Denayer and 23-year-old Moussa Dembele. The future is bright.

Gennaro Gattuso
Over the last month or so, Napoli have beaten Lazio, Juventus and Inter Milan and drawn against Barcelona. Gennaro Gattuso, appointed in December, might just have scared the Nutella out of players who had grown comfortable under Carlo Ancelotti.

Barcelona
You can’t suffer an embarrassing second-leg implosion if you draw the first. Roll-Safe-Meme.jpg.

Hans-Dieter Flick
His aggregate score from four games as a manager in European competition is 14-1. Bayern might never go Hans-free again.

Serge Gnabry
He has scored more goals in London this season than Olivier Giroud, Michy Batshuayi, Christian Benteke, Mesut Ozil and Christian Eriksen combined, and as many as Alexandre Lacazette. He’s only bloody played there twice.

Maurizio Sarri
We have been here before: a club with a recent history of hoarding trophies but a desire to redefine itself hiring a manager with a distinct style without backing him with the players necessary to implement it.

Chelsea could not countenance the relative short-term pain of third place and a Europa League trophy for the promise of something greater and more meaningful. Juventus will face that same dilemma this summer.

Maurizio Sarri might point to a squad either dominated by one individual or otherwise set in the ways established by Antonio Conte and enhanced by Massimiliano Allegri. Much like Chelsea made one permanent outfield signing and expected immediate positive change, Juve signed Rabiot, Aaron Ramsey and Gianluigi Buffon on free transfers and focused on improving a defence that barely needed it with Matthijs de Ligt, Merih Demiral and Danilo.

But he really doesn’t help himself. For him to admit to “having difficulty getting the idea across to this team that they have to move the ball quickly” is to acknowledge a failure to either coach or adapt.

It is the sort of message that he came to repeat during his final months at Chelsea. But for how long can a workman blame tools he might not be using properly?

Zinedine Zidane
It’s almost as if more than a passing focus on tactical preparation is required in these matches.

To be fair to Zinedine Zidane, he is the student that finished top of the class for three straight years despite doing considerably less homework than his peers. Si ce n’est pas cassé, ne le répare pas.

And it would be unjust to describe him as a coach without a plan or defined strategy. But his past success at Real was evidently reliant upon giving players the freedom to express themselves and figure out their own solutions. And if that didn’t work, Cristiano Ronaldo would score.

Without him, Real were always going to struggle. Eden Hazard’s absence is also a mitigating factor. But this is one club where excuses don’t wash.

Defeat in Sunday’s Clasico will leave this project hanging by a thread. Fail to overcome this deficit in the second leg and Real are back precisely where they found themselves at this stage last season.

It does not make for a particularly stable situation at a club that desperately needs it. When not even progress but decline cannot be sustained, it makes for a weird sort of purgatory. The race to become the tallest dwarf is on.

Quique Setien
They remain the favourites to progress, with Antoine Griezman’s away goal potentially priceless. But Quique Setien has won just two of his ten games at Barcelona by more than one goal.

It sounds like a ridiculously high bar because it is. The expectation is huge not only to win, but to do so in style.

There will also be questions over his selection of Ivan Rakitic over the excellent Arthur, and how they converted 67% possession into half as many shots on target as their hosts. Without the suspended Arturo Vidal in the second leg, those wrongs must be righted at the Nou Camp.

Sergio Ramos
Perhaps it is not so surprising as the law of averages is a thing, but Sergio Ramos has been sent off on four of the last five occasions that Real Madrid have lost having led at the Bernabeu (1-2 v Man City, 1-2 v Girona in February 2019; 2-3 v Barcelona in April 2017; 3-4 v Barcelona in March 2014). As good as he is, a captain should not be carried away so easily on a wave of momentum.

Want to see all his red cards ranked? Of course you.

Cristiano Ronaldo
Since 2007, Cristiano Ronaldo has reached at least the Champions League quarter-finals in every season but one. The exception to that rule came in his first campaign at Real Madrid, when they lost 1-0 away in the first leg of a last-16 tie with Lyon. Just saying.

UEFA
Manchester City are about to do a Marseille 1993/94 and will revel in every second of it.