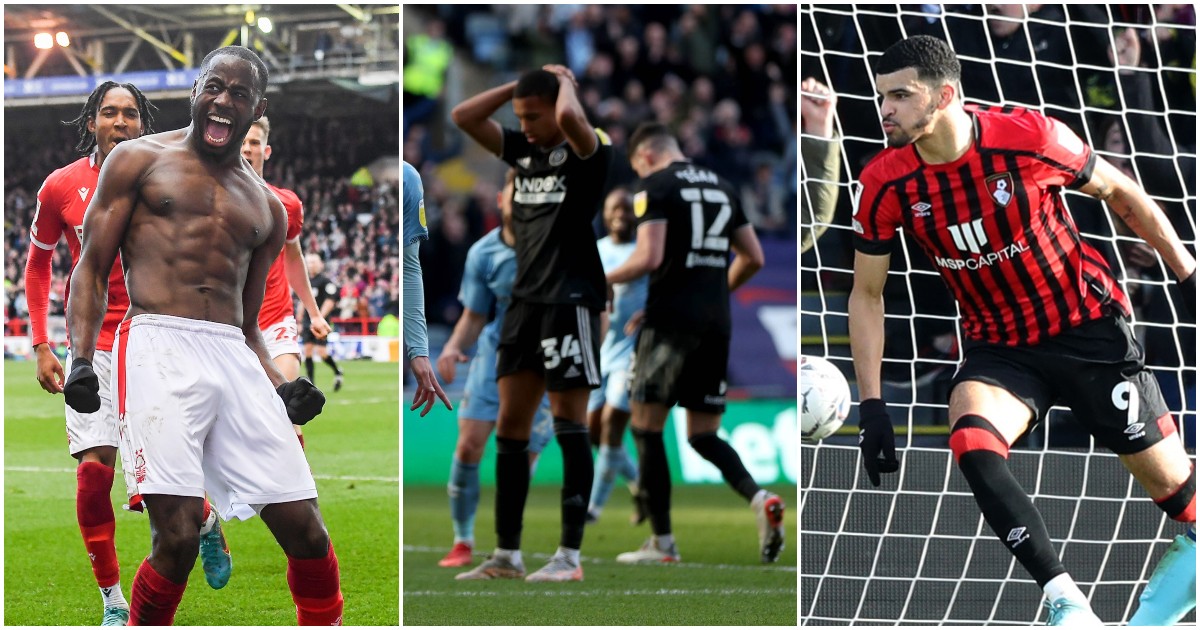 Rob Dickie
Normal service is resumed. QPR centre-back Rob Dickie was a near-perennial presence in the first half of our Winners and Losers column in the early stages of this season. While his and QPR’s season has taken a dip since the start of February, Sunday lunchtime’s fractious win over promotion rivals Luton handed Dickie and co a potential springboard back to the play-off places. Having scored in the first two games of the season, Dickie was as masterful at the back as he was in powering in the late winner to end a run of four straight defeats on the road in style.

Many times at the start of the season, we waxed lyrical about Dickie’s rise to one of the Championship’s best centre-backs and that the Premier League beckoned for 2022/23. This may only have been QPR’s second win in eight games, but they are back in control of their own destiny. They and Dickie may yet reach the top flight together.

Poya Asbaghi
Three games in March may only have brought a return of two points, but the performances are promising for Barnsley, and those points could prove crucial for as long as 21st-placed Reading continue to pick up nothing. Just as was the case in midweek against Stoke, Barnsley were left wondering what could have been after conceding yet another late leveller to Fulham on Saturday lunchtime.

Had the Tykes held out on both occasions, they would be above the relegation zone for the first time since September. Time is fast running out as the business end of the season approaches, but there is hope at last. It may be that that kills you, but it has breathed new life into Barnsley’s campaign. If Poya Asbaghi can secure Barnsley’s second-tier status from the position he came into the club, it will be just as great an achievement as Valerien Ismael getting the Tykes to last season’s play-offs.

Bournemouth’s strike duo
Dominic Solanke has been brilliant all season; Jamal Lowe has bided his time to be an important figure for Bournemouth, but the two combined on Saturday to take the Cherries back into pole position for that second automatic promotion place.

Scott Parker’s side were experts in recording undramatic, no-frills victories in the first half of the season. Goals scored late in either half provided the most routine of wins on the south coast while consigning Derby to their likely fate in the third tier next season. That is now four goals in five games for Lowe, having scored just twice until the start of February while Solanke continues his career-best form, moving onto 21 for the season. The exploits of Aleksandar Mitrovic overshadow the fact that Solanke is on course to finish just three goals shy of Ivan Toney’s record last season.

Nottingham Forest’s strike duo
It’s not just on the south coast where strikers are making the difference for a promotion-chasing club. Keinan Davis and Sam Surridge joined Forest in January and while neither has had overwhelming impacts in front of goal, they have offered marked tangible improvements on Lyle Taylor and provided adequate cover for Lewis Grabban during his spell on the sidelines.

Along with Ryan Yates’ long-range strike, Davis and Surridge were responsible for the dismantling of Reading which keeps Forest at pace with those inside the play-off places. It took just 17 seconds for Davis to hand Forest the lead on Saturday with a well-executed strike; Forest haven’t spent much longer than that in the top six this season. Keep piling the pressure on those above and they might be there when it counts.

Blackpool déjà vu?
A year ago this weekend, Blackpool drew 0-0 with local rivals Fleetwood to sit 10th having spent almost all of the season to that point in mid table. An end-of-season run that saw the Seasiders lose just twice in the final 22 games of the campaign inexplicably took Blackpool into the play-offs and then to the Championship, overcoming Oxford and Lincoln in the end-of-season lottery.

Gary Madine’s early header against Swansea was enough to secure a third successive win for Neil Critchley’s side ahead of a clash with Sheffield United in midweek, who sit six points above Blackpool in the top six. Make it four wins in a row and another gatecrash could be on the cards. Rest assured, these are special times at Bloomfield Road.

Andi Weimann
It still remains that only Ben Brereton Diaz, Solanke and Mitrovic have scored more often in the Championship this season than Andi Weimann. The Austrian forward’s 17th of the season handed Bristol City a first away win since October. While we’d love to posit this is the turning of a corner, a reminder is due that Bristol City have been consistent only in their inconsistency this season. Weimann, on the other hand, has been consistently impressive and it was no surprise to see him rock up as a match winner once more. Where would the Robins be without him?

Jonson Clarke-Harris
Single point pick ups need to turn into wins sharpish if Peterborough are going to stay up, but the momentum of a last -minute leveller will provide another welcome shot in the arm for Jonson Clarke-Harris and his Posh teammates. If Grant McCann’s side are to stay up, a first win in his second spell is crucial. Clarke-Harris is likely to have to play a part in getting those victories as he showed that on his day, as against Stoke with his two-goal salvo, he does have the requisite Championship quality that he and Peterborough require to swim at this level.

Callum O’Hare
On his 100th start for the club, the enigmatic O’Hare did the one thing that often escapes him, twice. In netting half of Coventry’s four goals against Sheffield United, O’Hare reminded the nation of his quality while Sky Blues fans are aware his contribution to this well-functioning side is about much more than just goals. That being said, if scoring a few more bridges the three-point gap to the top six, nobody of a Sky Blue persuasion will be complaining.

The play-off race
Just five points separate QPR in fourth from Millwall in 11th with less than a quarter of the season remaining. This is going to be a play-off race for the ages.

Sheffield United and the F365 curse
It stands to reason that as soon as sing the praises of an individual, collective, or football club as a whole, the entire thing collapses and burns. But it seemed that Sheffield United, with all their brilliance since Paul Heckingbottom took the reins in November, would resist the Football365 curse of losing after praise from this website. Sander Berge’s early opener at Coventry made the curse feel even further away, but the Sky Blues enacted a 4-1 reverse on Sheffield United just as they had done on fellow promotion-chasers Middlesbrough in midweek.

Defeats are to be expected every now and then, even for the most in-form teams, and it now becomes about how the Blades react to such sharp disappointment. A defeat is a defeat, regardless of scoreline and opposition. Middlesbrough reacted to their defeat in South Yorkshire with a hard fought goalless draw at Millwall. It is now up to Heckingbottom’s side to have a similar reaction against Blackpool in midweek.

Paul Ince
What started so well with Paul Ince’s return to football management has turned into a big dumpster fire less than a month after his interim appointment until the end of the season. Tasked with keeping the Royals in the Championship by any means necessary, a third straight defeat – the second in which they’ve shipped four goals on the road – means Ince’s temporary appointment is already looking like coming to an end.

Reports are suggesting that Reading could look to replace the former MK Dons and Blackburn chief even before the end of the campaign. That might prove to be their best bet in a bid to maintain their second-tier status with Barnsley, Peterborough and Derby all having renewed merits in pursuit of staying up. An unexpected and undeserved reprieve at management has gone to pot after a series of odd interviews, unique beliefs, poor tactics and line-up choices.

Blackburn’s goalscoring woes
In drawing another blank, that made it 10 games from their last 14 in which Blackburn have failed to find the net. Likewise, Rovers have won just twice in the last 10 league outings. They remain in the play-off picture for now, but this poor form can only continue for so much longer before one of the chasing pack take their place in the top six.

Bradley Dack
His first appearance in the matchday squad in over a year, Bradley Dack was given the perfect opportunity to mark a miracle return from his latest serious injury with the chance to take a late penalty. But Blackburn’s woes in front of goal extended to a man who was yet to play a part in this unexpected promotion push; Dack’s tame penalty was saved and Blackburn had another glum day all round.

Sam Johnstone
Perhaps Ismael had the right idea when dropping England international goalkeeper Johnstone for his last couple of games in charge of West Brom. Out of contract in the summer, Johnstone will not be with the Baggies come next season. Against Huddersfield on Friday night, Johnstone’s head was elsewhere. His lackadaisical touch and reaction led to Danny Ward opening the scoring when charging down the shot stopper while Huddersfield’s and Ward’s second goal came from a save Johnstone pushed out directly to him.

Johnstone is not alone in being a West Brom player letting his team down, but he is the one who has to fall furthest from his ceiling to do so. With the season looking as good as over, it might be time for West Brom to look to the future between the sticks.

The mid-table stalemates
Birmingham, Hull, Cardiff and Preston all have little to play for this season with promotion and relegation looking near-impossibilities for each of the quartet. That the four played out insipid, goalless draws over the weekend meant there are some early visits to the beach for some \Championship stars.