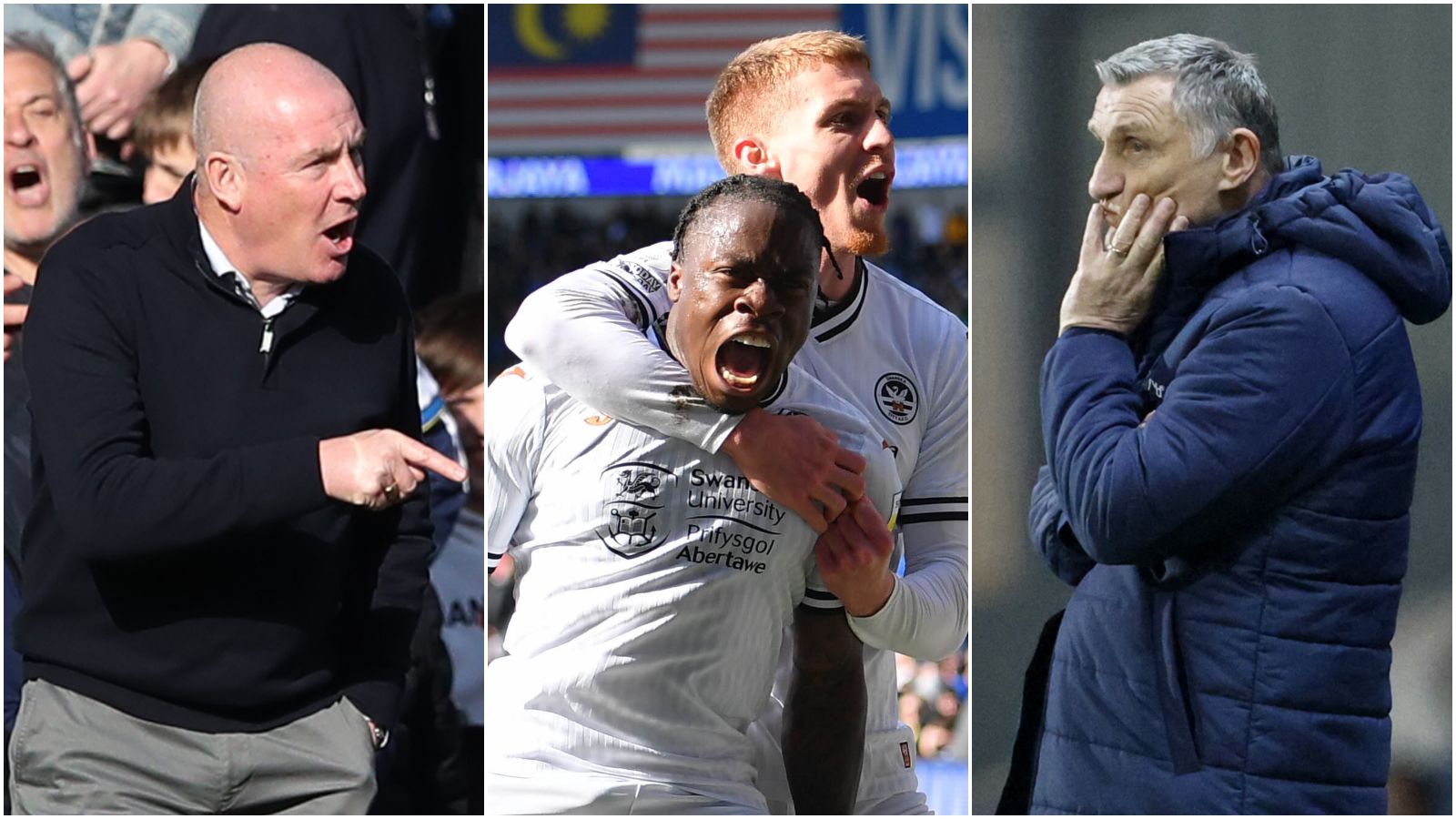 Mark Warburton will surely not be at QPR for long now…Nottingham Forest are among those in a better position.

Brennan Johnson
Many a hot Championship talent have seen their form dip and attitude tumble after likely Premier League moves break down in mid-season. So despite the fact that Brennan Johnson was linked once more in January with a move to the top flight of English football, it has been a revelation to see the tricky winger go from strength to strength this side of Christmas.

This time last year, the Wales international was playing in League One. Now, he is on the verge of the Premier League with or without Nottingham Forest – though the former is looking incredibly likely – and could play a starring role at the World Cup just before this Christmas. In assisting the opener and scoring two beside the seaside, Johnson played a commanding role in getting Forest into pole position for breaking into the play-off places.

On a fantastic day in Blackpool for the visitors, Johnson looked at home in front of goal yet again for his 13th and 14th goals of the season, his eighth and ninth since Christmas. The lad is special, as is his team.

Josh Laurent
This Reading team isn’t special, but they might just have enough about them to stay up. If Johnson has been getting better and better through the campaign, Reading midfielder Josh Laurent has spent the bulk of it injured and returning to form upon coming back into the team. He might have just arrived in time, and he was on the scene when the Royals needed him to be against relegation rivals Barnsley on Saturday afternoon.

Laurent was in the right place at the right time with less than 10 minutes on the clock. His timely equaliser keeps Reading and Barnsley as they were, with Paul Ince’s side five points above the Tykes and equally so above the relegation zone. As predicted by Benjamin Bloom.

Middlesbrough’s goal difference
In such a tight race for those four coveted play-off spots, Middlesbrough made literal great strides to making one of them their own, picking up not just three points on their trip to Peterborough, but aiding their goal difference a substantial amount too.

Four different goalscorers provided four moments of joy for a fantastic travelling contingent who travelled down the east side of the country for a match which could have ramifications for Boro’s hopeful journey north to the Premier League. Before kick-off, Chris Wilder’s side had a worse goal difference than Huddersfield, Blackburn and Sheffield United. Now Middlesbrough are better than each of that trio of promotion challengers. If it proves to be worth an extra half a point come the end of May, they may well look back on a fruitful trip to London Road as a key component.

Swansea celebrations
A first ever league double completed by either Cardiff or Swansea over the other in over 100 years of the fixture, Swansea made it worth the wait by decimating their south Wales rivals with ease, precision and mick-takingly superiority on Cardiff’s own turf. If it was odd to see such a classic fixture played at 3pm on a Saturday, it was understandable with nothing tangible – only pride – to play for. Swansea made the short journey home with that in their pockets, as well as a Cardiff player or three.

Michael Obafemi was the star of the show. A slow start to his career with the Jack Army has been jacked up by a scintillating run of form; this was his third brace in six outings. It took him until February to reach two goals for the season.

For Swansea, much of the discourse of this season has been looking towards building for 2022/23. Days like Saturday though are just the ticket for what football is really about: living in the moment and making memories. Whatever success Russell Martin brings to the Liberty Stadium or otherwise in the future, he will always have this.

Harry Toffolo
There is a gulf in quality between Yorkshire opponents Hull City and Huddersfield Town, but the latter had to squeeze over the line against the Tigers who looked capable of nary laying a scratch on the Terriers, never mind a mauling. In times of such struggle, and remembering that the visitors had gone three games without a win, the source of success often stems from the most unexpected places.

Toffolo has been a regular provider of goals this season, but this was just the second time the left-back got himself on the scoresheet, his winner doing enough to lift Huddersfield five points above seventh place. For Toffolo, his move to the Terriers is vindicated. Brought to the club by Danny Cowley after their success together at Lincoln, the defender is playing the best football of his career under Carlos Corberan. He isn’t the only member of this Huddersfield team doing that.

Fulham and Bournemouth doing enough
Neither of their victories were standout performances, but three points added to the tallies of both of these teams mean promotion back to the Premier League is looking like a foregone conclusion for each.

Ravel Morrison
A first goal for Jamaica in the international break was coupled with a fourth goal for Derby County which could yet play a part in keeping the Rams in the Championship. The only one of the four teams embroiled in this relegation scrap to win at the weekend, Morrison’s instinctive finish keeps Derby six points behind Reading in that all important 21st place. A good week to cap what has been a great month for the former Manchester United starlet; Morrison might just have found a home at Pride Park.

Aleksandar Mitrovic
36th and 37th league goals of the season scored to despatch of West London rivals QPR and all but confirm promotion back to the Premier League. A ridiculous season from a ridiculous player in an absurdly ridiculous team.

Elijah Adebayo
It wasn’t a perfect weekend for Elijah Adebayo and Luton Town in drawing 2-2 with Millwall, but they still control their own destiny. Adebayo’s strike was his 20th Championship goal for the Hatters and they are yet to taste defeat when the former Walsall man is on the scoresheet. A few more between now and the end of the season should see Nathan Jones’ side into the play-off battle.

Mark Warburton
When a team loses a game, it is often said you want the next game to come quickly to turn it around. When a team is in a bad run of form, a rest in the form of an international break can be the best-case scenario to regroup. What you then don’t want is to return against the table-topping, record-breaking league leaders to see any chance of a restarted momentum go to waste minutes after starting your first game in a fortnight.

Unfortunately for QPR, that is exactly what they got against near-neighbours Fulham in a capital clash for which Mark Warburton’s side’s understandable inferiorities were punished by a certain Serbian striker. Mitrovic had endured a dry streak by his lofty standards – not scoring in two games before the break – but it is Warburton’s extensive poor run of form which now has QPR on the verge of looking for a new manager. A fifth defeat in six games has seen what looked like a sure thing of a play-off place look increasingly unlikely with better and more sustainable teams taking those top six spots.

Warburton’s potential dismissal will seem harsh – missing out on a play-off spot very few expected them to compete for beyond Christmas – but his commitment to a system which hasn’t worked well since the festivities means a fresh start might be best for all concerned at the Kiyan Prince Foundation Stadium in the summer.

John Egan
There has been no doubting John Egan’s ability as a Premier League-level centre-back since his key role in the middle of Sheffield United’s promotion-winning back three of 2018/19, but his own goal at Stoke City could play a big part in costing the Blades’ an immediate return to the top flight. Paul Heckingbottom’s side went into the international break having won just two of their previous six games in the most inconsistent part of his reign to date.

A place in the top six is still in Sheffield United’s hands, and it would take a brave person to rule them out, but they can ill afford slip-ups of this ilk against sides with little to play for. Tuesday’s game against QPR cannot come quick enough for Egan and his teammates to make amends.

Peterborough losing ground
On a weekend when Barnsley and Reading picked up a point apiece against each other while Derby gathered a potentially crucial win, Peterborough tripped over their own laces and faceplanted multiple times. Going down 4-0 at home to Middlesbrough showcased the obvious difference in quality between the two sides. In truth, few pinpointed this as a game to take anything from. There are easier fixtures ahead in the final weeks of the campaign, but there are ways and means of going down. Peterborough are almost certainly doing it with a whimper. They are rock bottom and on this evidence, unlikely to get back off it.

Blackburn’s non-momentum
For now, they are still somehow hanging on to a place in the play-offs. If the season ended after 40 games, Blackburn would have limped into the top six. It seems less likely with every passing non-victory that Tony Mowbray’s team will finish the right side of the dotted line. Opponents Coventry getting a last-minute leveller should come as no surprise given the Sky Blues’ propensity for such joyous drama, but both these teams are looking destined for being just not quite good enough. Having failed to score in a division high 11 Championship games this calendar year, Blackburn scored at least two for the second time in three games.

It has been a stubborn defence which has kept their play-off hopes alive but late lapses cost them dearly on a rare day when the attackers got their end of the bargain right.

Cardiff’s commiserations
In the grand scheme of things, whoever won and lost the south Wales derby was landing on the right and wrong side of pride and bragging rights. But just as happy as Swansea were to win the battle and now likely too, the war of finishing higher in midtable than their rivals, losing 4-0 at home is approaching unforgivable in such circumstances. Make no mistake, this will hurt everyone connected to the Bluebirds.

Having scored just once in their last seven games in this fixture, this was the worst performance of the lot, and one that will take a lot of making up. If it takes a lifetime to build a reputation and a second to destroy it, Cardiff have thrown away much of the goodwill created under Steve Morison in 90 gut-wrenching minutes.

West Brom
When West Brom defeated Fulham in the middle of March, it felt as if they might just have the sneakiest chance of making the top six. A draw at Bristol City before defeat to near neighbours Birmingham exemplified exactly why they won’t. It is time to prepare for that all important final season of parachute payments.