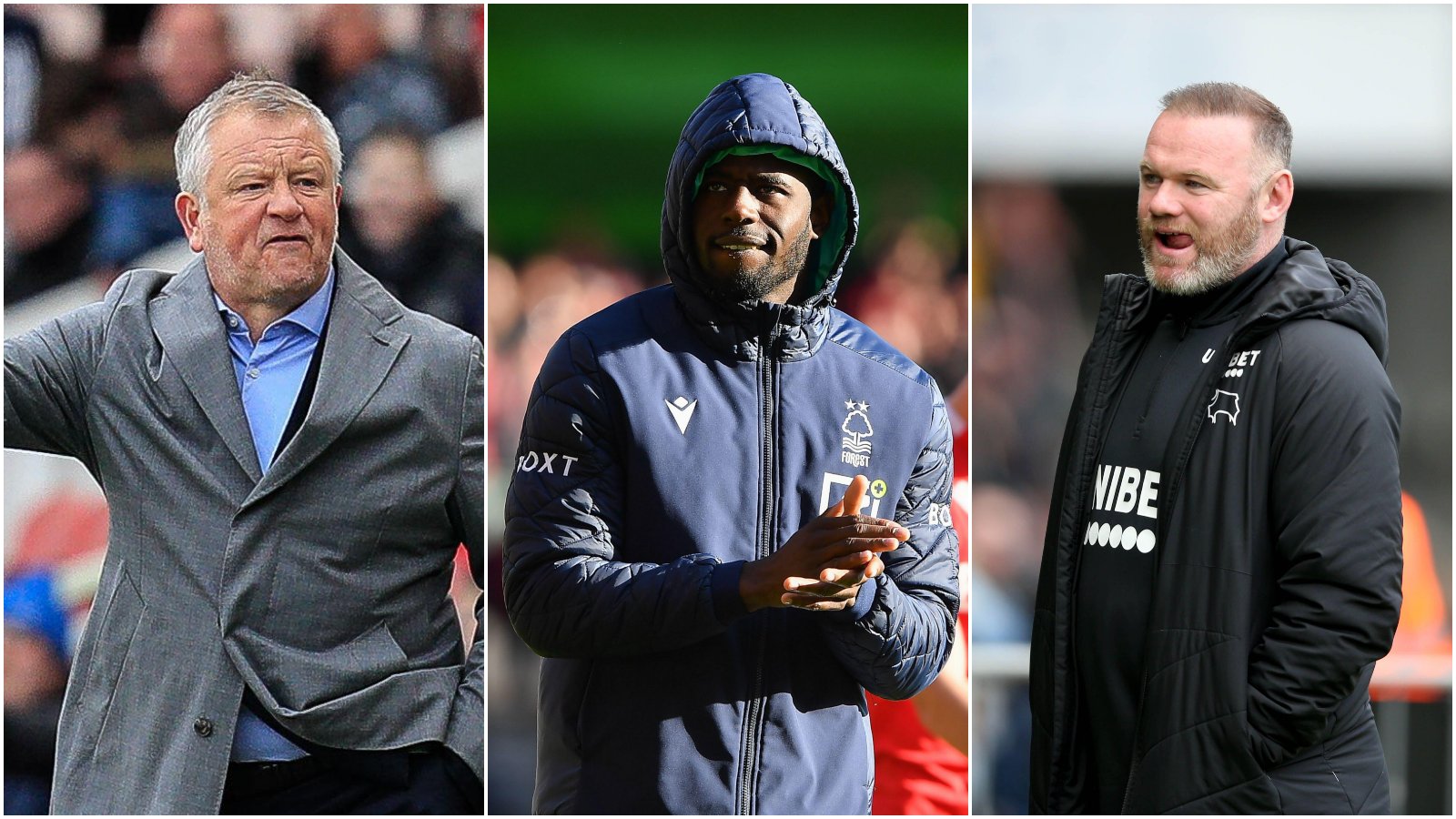 Keinan Davis
Keinan Davis joined Nottingham Forest in January at something of a career crossroads. His successes with parent club Aston Villa were few and far between. Despite playing 87 times for the Villains, the youth academy graduate’s role had rarely been as anything other than a substitute. Various loan moves had been touted over the years but before this winter, the forward had made it to 23 years and 10 months old without having played for another club.

Enter stage left, Steve Cooper and his band of merry men on the lookout for another soldier to add to the promotion-chasing ranks. With Lyle Taylor shipped out to Birmingham and Lewis Grabban sidelined, there was pressure on Davis to perform as the main man up top for the first time in his career. Anyone who doubted he was up to the job has been made to eat a huge slice of humble pie, and it is tasty for everybody at Forest.

When the City Ground erupted after just five minutes thanks to Davis’ fifth goal of the campaign – a typically calm finish on the end of an explosive run – they never looked like doing anything other than winning. Davis has been a big winner since moving to the City Ground temporarily, and everyone will be a winner in the summer if this move is allowed to become more permanent. At this rate, that will be as a Premier League striker with a Premier League club. Nobody looks like being able to stop this train any time soon.

Danny McNamara
It’s no secret that Millwall wing-back Danny McNamara is a talent. Mahlon Romeo has spent the season on loan at Portsmouth thanks in no small part to the 23-year-old’s emergence in the first team after a successful spell north of the border with St Johnstone last season. The measure of an outstanding full-back is not primarily goals, but when you’re as frigid in front of goal as this Lions side can be, knowing where the back of the net is does not harm your chances of receiving plaudits.

A first ever EFL and Millwall goal gave Gary Rowett’s side the lead by being in the right place at the right time before repeating the feat later in the afternoon from closer range with his head. The brightest and certainly most unexpected spark of a stunning afternoon at the New Den, McNamara played a big part in keeping Millwall’s small chances of promotion alive.

Joel Piroe
A great debut season in English (and Welsh) football just keeps getting better. Piroe is one of the outstanding goal scorers in the division and at just 22 years old, is almost certainly only going to get better. The scorer of 20 goals for the Swans this season, Saturday afternoon was ridiculously the first time he has scored more than once in the same game. That it took just 16 minutes went some way to explaining the confidence of Russell Martin’s team in the best week at the Liberty Stadium since taking the helm late last summer.

That has put talk of a successful second season in motion, but the likelihood is that they will have to do it without the input of their star forward, who is surely destined for a fast track to the top flight this summer, and for a pretty penny more than the £1million or so Swansea got the Dutchman for nine months ago.

Coventry, breaking the F365 curse
Of course, the day we released a glowing article stating that Coventry City’s promotion hopes were all but over, they go and complete the double over runaway league leaders Fulham, with Callum O’Hare putting in a tangible starring performance defying the bemoaning of the goal involvement of Coventry’s midfielders this season.

Author’s note: we can be persuaded to write pieces on your club or their upcoming opponents in order to see results go your way a la Coventry and almost every other club we’ve covered in the past couple of months.

Lewis Baker
If Stoke have any sense about them – and much of their recent history suggests they don’t – they will build their team around star midfielder Lewis Baker. Having spent almost two decades on the books of Chelsea and endured countless loan spells to rack up his frequent flyer miles in temporary switches from Stamford Bridge, Baker has wasted no time in making the Potteries a far more comfortable and loving home.

Not that he needed to as he has credit in the bank, but putting in a starring role and scoring against local rivals West Brom is never a bad way to endear yourself to the Stoke support. That is exactly what Baker did, and it should come as no surprise to anyone who has followed the 26-year-old’s career these past few months. Far too many Stoke midfielders have been injury-prone, ineffective or just generally in a malaise too often for Michael O’Neill’s side to count upon; Baker is the complete opposite and then some. There are a few unknowns about Stoke next season, but one certainty should be Baker being the star of the show every week.

Steve Morison
Morison suffered the ultimate Manager of the Month curse this time last week, losing 4-0 at home to bitter rivals Swansea in the first game of April having been crowned king of the second-tier coaches for March. But a host of line-up and tactical changes made for a tough outing at a resurgent Reading brought about a well-earned victory that so easily could have been thrown for nought after trailing early doors. Results like this say a lot more about Morison’s capabilities than that derby humiliation.

Shota Arveladze
This was game one of a six-match trial to prove – if not to the Hull decision-makers then certainly the Tigers supporters – that he is the right man for the job next season. The 1-0 victory at Middlesbrough was far from perfect, but it’s a tick on the list. That will do nicely for starters.

Jonson Clarke-Harris
Peterborough striker Clarke-Harris scored five Championship goals this season up to the start of March. His equaliser against Bristol City made it six in six. Recency bias of form should earn him a Championship reprieve as Peterborough tumble back to League One; he has done just about enough to be the latest striker to tumble off the London Road production line.

Nigel Pearson
Bristol City manager Nigel Pearson is no stranger to odd responses in press conferences – think ostrich – but his comments after Bristol City’s shambolic draw to Peterborough United left a bittersweet taste in the mouth. Pearson’s commitment, or lack thereof to the Robins cause, has been no secret for some time now.

His side’s commitment to throwing away leads has been similarly clear – they have led on 33 occasions this season, level with Fulham, yet sit 18 places and 41 points below the league leading Cottagers. Pearson’s shtick was semi-acceptable to begin with, but he has been at Ashton Gate long enough to shoulder more responsibility than his lackadaisical approach to questioning warranted on Saturday. It has been blatantly clear for the best part of the season that Pearson is not the right man to take the club forward, and his appointment and reign have been a shambles for the most part throughout.

“We’ve got five games left. That goes for me as well. So if I’m not here, whoever comes in has got the same problem – and that is getting players to play,” Pearson said in the wake of another poor afternoon for his side, in which the team rock bottom of the division and with 10 men mustered a point. Much as he might like to dissuade otherwise, Pearson is part of the problem. The next man in must bring solutions that Pearson has never looked like providing; indeed, he has added to them tenfold.

Instead, Barnsley, Derby and Peterborough took just a point between them from fixtures against Millwall, Swansea and Bristol City. Reading could likely fail to win any of their remaining games and still stay up; the chasing pack’s race is almost certainly run.

Middlesbrough, seriously this time
We faced some light criticism for daring to put Middlesbrough in the losers list after quite literally losing at home to Fulham. Play-off chasers should always lose to league leaders, didn’t you know. This time, there can be few arguments. Far be it from us to be succinct, but Boro were better than Hull in most metrics, except the one that mattered.

For anyone counting, that is now four games in all competitions at the Riverside in which Chris Wilder’s side have failed to score. They are losing form and momentum at the worst time.

Paul Ince
In midweek, Ince topped the winners column by virtue of all but sealing Reading’s status in the Championship. Job very much done. But even in doing that, Ince had done little either this season or in his previous bodies of work to suggest he was the right man for the job beyond this summer. That was proven even more so in providing what must have been a calamitous half time team talk to see his side lose at home to Cardiff from a 1-0 advantage.

Reports have surfaced however that Ince will be asked to take charge of the club from next season, which brings us on nicely to…

QPR’s goalkeeper situation
QPR signed Kieran Westwood less than a month ago with each of their first four-choice goalkeepers out injured. In the warm up for the clash with Preston, Westwood pulled up and had to be replaced by sixth choice Murphy Mahoney. The youngster performed admirably in debut defeat, but the situation sums up QPR’s spectacular fall from grace over the last three months superbly.

West Brom showing their mid-table credentials
In the last month, West Brom have beaten the top two, Bournemouth and Fulham. In that same time period, they have drawn with Bristol City and lost to both Birmingham and Stoke. Next season, they must find consistency more than anything else if they are to return to the Premier League.

Filip Uremovic
On just his second start for Sheffield United since his surprise signing for the Blades, Uremovic was a rock at the back once more in making it two clean sheets out of two. But still, he missed an absolute sitter to win it and we have virtual inches to fill so in you go, Filip.