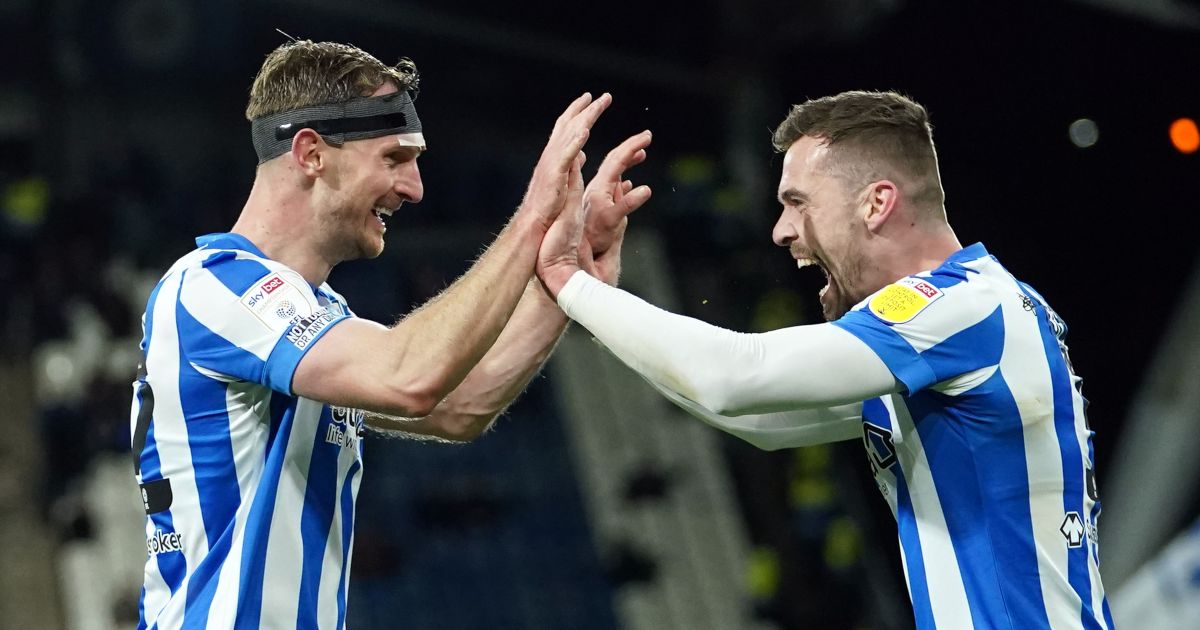 Huddersfield Town are second, which seems ludicrous. They beat Peterborough, who are surely relegated.

Tom Lees
When it comes to permanent employers, Tom Lees is as Yorkshire as they come. The Birmingham-born centre-back made over 100 league appearances for Leeds United over a 15-year association that started when he was nine years old, and played more than twice as much for Sheffield Wednesday. In moving back to West Yorkshire last summer with Huddersfield Town, it looked as if the Terriers were getting a defender past his prime. Looks can be deceptive. Sporting the classic tough centre-back look of bandaged head from his defensive exploits against Cardiff City, Lees returned to the Huddersfield line up with the all-clear to destroy Peterborough at either end.

Since conceding three goals in a single afternoon to Reading, Lees has conceded an equal number in seven appearances thereafter. Against the Posh, he was imperious at the back once more, not that he needed to be. Going forward, the first brace of his career made this a comfortable night in West Yorkshire for the hosts. With more than 400 Championship appearances to his name but nothing to show for it in the top flight, Huddersfield’s brief sojourn into the automatic promotion places proved there may be time to put that right. Sixteen games unbeaten is the ultimate marker of a side going places.

Ravel Morrison
For all of the fight and talent in this battling but recently short-handed Derby squad, Ravel Morrison has come to be the disappointment that many expected when he signed for former Manchester United teammate Wayne Rooney. But if players are judged in the long term on moments of impact and magic, Morrison might have just given Derby fans every reason to remember him as a legend in years to come.

Their relegation tussle with fellow bottom three outfit Barnsley saw the Tykes come into the clash as the team in form, having won three of their last four in a spell where the Rams had suffered three straight defeats for the first time this season. Morrison’s double either side of half-time were his first and second goals in English league football in nearly eight years. They may just be the springboard to help secure Derby’s short-term future as a Championship outfit while the club fight for a lifeline off the pitch. With Reading, Peterborough, Hull and of course Barnsley all losing, this was as good as it gets for Morrison and Co.

Ryan Lowe
You have to hand it to Ryan Lowe. He went into a club struggling for an identity and with an inability to pick up results on a consistent basis. Less than three months into his tenure, Preston look a completely transformed club. Only forward Cameron Archer arrived in January, so while there have been no wholesale changes in Deepdale personnel on the pitch, everything about the Lilywhites feels so much better.

Against promotion-chasing Bournemouth, Preston put in a performance and got out a result which suggests they could still sneak into the top six. That need not be the objective, but it is good to see some guidance and forward momentum with the club after going nowhere very quickly in the latter days of Alex Neil and Frankie McAvoy’s ill-judged reign. Watch out for Preston as next season’s dark horses already. Lowe has the club on a high.

Cardiff’s youth academy products
Preston weren’t the only club to come from behind to win at a promotion chaser; Cardiff City’s 2-1 win at QPR came courtesy of goals made in Wales. Cardiff’s resurgence under manager Steve Morison – this week deservedly confirmed on a permanent basis – has been built on the foundation of youth. Isaak Davies and Rubin Colwill have been quietly astute and outstanding respectively since breaking into the team. In the capital, their second-half double punished QPR. Like Preston, expect better things from the Bluebirds next season.

Billy Sharp and Ryan Yates
While Huddersfield were putting Peterborough to the sword in a mismatched clash, there was no separating the fighters in Friday’s box office clash. Sheffield United and Nottingham Forest came into the game looking to make their way into the top six for the time being at least. Both showcased why they have fantasies of being in there come May. Forest were largely the better side, in both statistics and the eye test, but it was the Blades who clambered into the play-off places.

That tells only part of the story. Ryan Yates’ 95th minute equaliser and subsequent celebrations in front of a packed away end further proved his importance to a side he used to detriment when played out of kilter by Chris Hughton. Under Steve Cooper’s management, he has transformed into one of Forest’s most important individuals. He was the difference-maker on the night, cancelling out Billy Sharp’s scarcely believable 13th goal of the season. There is no luck about Sharp’s ability to be in the right position at the right time, time and time again. It was fitting there were so many winners on a night when nobody lost. If this fixture ends up being played over two legs or at Wembley in May, few will complain.

Fulham’s other attackers
Aleksandar Mitrovic failed to add to his 34 goals for the season, but his supporting stars became the main attraction on Saturday lunchtime with well-taken goals in the space of 10 second-half minutes. Neeskens Kebano and Harry Wilson each scored their ninth Championship goals of the season to dispatch promotion challengers Blackburn with relative ease. On a day when Mitrovic had to resort to diving to try and add to their tallies, the wide attackers in the team made the tangible difference.

Karlan Grant
For all his faults and limitations, Karlan Grant remains the closest thing West Brom have to an out-and-out goal scorer. With West Brom having only scored once in Steve Bruce’s first five games in charge, Grant scored two in one afternoon to at least stop the Baggies dropping league places at an alarming rate. That’s now 12 for the season for the former Huddersfield forward, who may be the only West Brom player capable of playing at a higher level right now.

Josh Bowler
Talking of playing at a higher level, enter stage left Blackpool winger Bowler. One of the Championship signings of the summer, Bowler could have gone for the double bargain awards had he moved to Fulham, Bournemouth or Nottingham Forest in January. But in staying beside the Tangerine seaside, Bowler has gone from strength to strength. Where lesser characters could have easily sulked the second half of the season away, Bowler’s late winner was his sixth goal in eight games. He is destined for even greater things.

Michael Obafemi
Former Southampton man Obafemi had scored just three goals in his Swansea loan career prior to taking on Coventry City. The 21-year-old is now halfway to double figures after two instinctive finishes which belied his previous struggles in front of goal for the Welsh side. An assist for Jamie Paterson’s opener didn’t go unmissed either. In a season of transition, there have been too few markers of intent like this from Swansea as a whole and their individuals. Against Coventry, signs of a brighter future all round were plain to see.

Jake Cooper
Two successive headed winners for centre-back Jake Cooper. Five successive wins for perennially mid-table Millwall. Things are looking up for the Lions in more ways than one.

Peterborough United, going down without a fight
It took Manchester City an hour to break Peterborough’s midweek resistance in the FA Cup, and then to the 67th minute to double that advantage. Three nights later, it took Huddersfield three and seven minutes to repeat the trick. A game lost in this oddest of rivalries almost immediately after it had started. Second best across the park without any of the excuses of playing against world-class footballers – albeit some Huddersfield players are getting close to those standards – Peterborough have now lost 3-0 in each of Grant McCann’s first two games back at the London Road helm.

Rock bottom, eight points off safety with a dozen games to go, even a miracle might not bridge the gap between this Posh side and the teams actually fighting for their Championship lives above them.

Michael O’Neill
The end of the road is looking closer and closer for Michael O’Neill and Stoke City. We wrote about it in the week, but yet another home defeat coupled with a dire performance against a financially inferior Blackpool rocked what little faith there still is in the Northern Irishman in ST4.

Stoke didn’t threaten to take more than a point from this mid-table clash at any point from first kick to last. Bowler’s birthday strike meant there was anything but celebrations for everyone connected to Stoke, who are going nowhere fast. Many of the problems within the club come from above O’Neill, but he will almost certainly be the one to pay the price. He has used up all credit in the bank and the fans want to cash in on something they can get behind once more.

Bristol City
It feels like we’re saying this on an increasingly frequent and frustrating basis, but what is the point of Bristol City? More so, what is the point of Bristol City and Nigel Pearson as a pairing? Ordinarily this season, late goals have been the Robins’ undoing. At home to Birmingham, they were 2-0 down with 13 minutes played. This is not bad luck. Pearson lamented after the game that his side had an ‘irritating trend’ to concede poor goals and an inability to string successive successful performances together.

For all the frustration and annoyance Pearson feels watching it, he should be in the position to change it. With it looking like Bristol City will have to sell their best up-and-coming stars in the next 12 months, it is hard to see where it will get any better for the Ashton Gate outfit before it gets worse.

1-0 up at home to Cardiff City, this should have been the sort of fixture and result to restore some pride and form to QPR’s season. They remain in the top six, but upcoming fixtures against promotion challengers Luton and Nottingham Forest could put paid to that luxury very soon.

Paul Ince
It was less than a fortnight ago. But already, Paul Ince’s first game in charge of Reading feels a lifetime ago. What could have been a season-defining home victory over Birmingham under the guidance of their new interim manager now looks more like riding the coattails of equally derided predecessor Veljko Paunovic, who took four points from his final two games in charge.

A calamitous defeat at Blackpool was followed by a resigned home defeat to Millwall on Saturday afternoon. 1-0 does not look as bad as a 4-1 reverse, but in truth, the Royals looked consigned to defeat since Cooper headed Millwall in front. With Derby revitalising their survival push and Barnsley having three wins from their last five outings, Reading are looking over their collective shoulders once more.