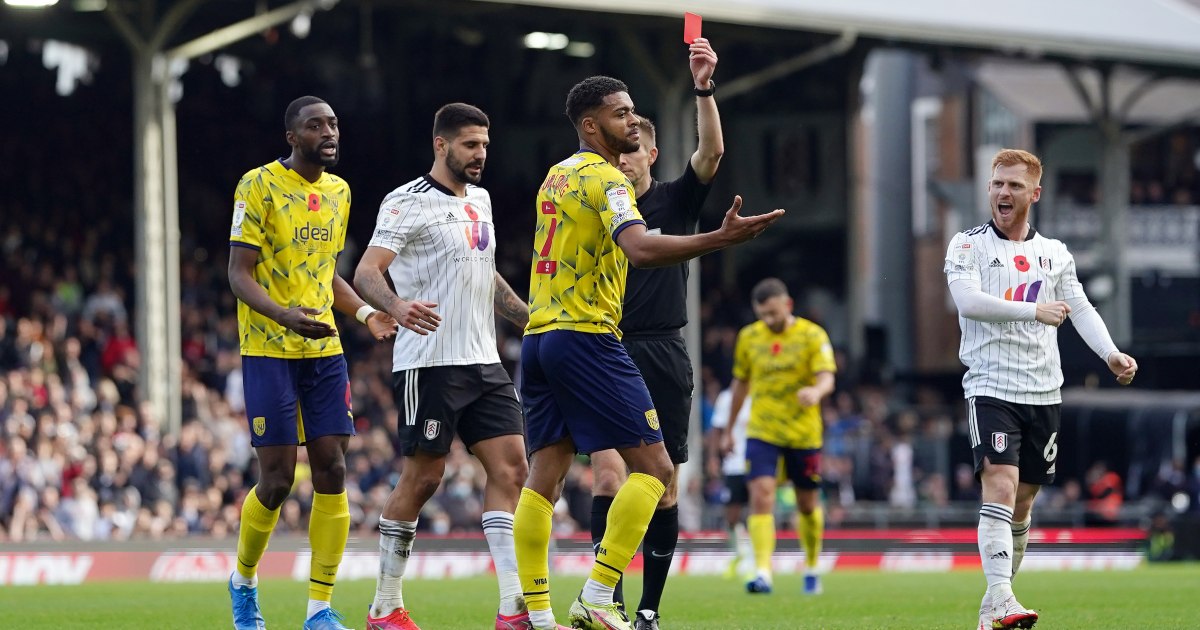 West Brom are the biggest losers of the Championship weekend as they look like the third club in a two-pronged title race. But first, some winners…

Cardiff and those five minutes
It has been some week for Cardiff City. Little of it has been positive, but much like Saturday’s contest with Stoke City, disaster was followed by eventual salvation to offer the Bluebirds hope that everything might just be okay. From 3-0 down just seconds into the second half and looking certain for a record-breaking ninth Championship defeat in a row, a five-minute spell midway through the second period provided what could be a springboard to bigger and better things.

It may only be a point, but Rubin Colwill, Mark Harris and last week’s big loser Kieffer Moore’s combined trio of goals could be the start of a comeback for the season to match the effort made in Staffordshire to snatch something from nothing. The point itself keeps Cardiff in 21st, one place above the relegation zone, but is one point more than the bottom three got between them on Saturday afternoon. More importantly however, it stopped the rot and could be the most important point of their season. Props to caretaker manager Steve Morison for that, and for doing what Mick McCarthy could not do in eight games before. What an achievement for him. What an achievement for Cardiff.

Aleksandar Mitrovic…again
There are simply not enough words in the English language to describe just how good the Serbian superstar Aleksandar Mitrovic is at this level. While it is important to recognise the team effort behind this most impressive result of Marco Silva’s reign to date, there is no denying that hat-trick hitter Mitrovic was the difference-maker against West Brom.

That is now 18 goals in 15 Championship games this season, and he looks set to beat every attacking record there is to be surpassed. To have Mitrovic in the Championship is to possess a cheat code. If he stays in this sort of form for much of the rest of the campaign, it will be another instant return to the top flight for the Cottagers.

🗣️ Here’s yesterday’s Championship review show. We’re right back at it tonight with the midweek preview so catch up while you can!!

Blackpool, towering
Regular readers of this column will be well versed in my adoration for Blackpool manager Neil Critchley, who has made the transition from League One to Championship for the Tangerines look as easy as his own from youth team coach with Liverpool to where he is now. After a difficult readjustment to the second tier to start the season, an excellent run since the first international break has culminated in three successive victories owing to Keshi Anderson’s stunning winner at Sheffield United allowing Blackpool to rise into the top six.

This topsy-turvy season suggests they are unlikely to stay there, but to be there at all is testament to a side that is far greater than the sum of its parts. Blackpool’s rise has been as remarkable as the fall which came before.

Jonathan Hogg and Jack Colback, doing what they don’t do best
Neither Jonathan Hogg nor Jack Colback are famed for their goalscoring prowess. In over 600 league appearances between them, they have less than 20 goals. But over the course of Saturday afternoon and Friday night, both holding midfielders proved the difference for their sides, Hogg heading a late winner for the Terriers to take them back into the top six and Colback scoring a superb last-minute leveller at QPR to avoid back-to-back punishments against teams from the capital for Nottingham Forest.

Andi Weimann and an end to the hoodoo
It had seemed at times as though Bristol City’s home hoodoo would never come to an end, and failing to do so against Barnsley, by far the worst team in the Championship this season in most metrics, would have made even the most optimistic of Robins supporters fearing they would never see an Ashton Gate victory again.

But this was the Tykes, who conspired to throw away a lead in the space of five minutes at the end of the first half, with Andi Weimann using his experience to turn the game on its head before the changing of ends for the respective sides. It has been a long time coming, but a first home win since January was welcomed with open arms, and a huge sigh of relief for Nigel Pearson to break his home duck in charge of the Bristolians.

Ben Brereton Diaz
Another two goals in especially efficient fashion against Derby takes Ben Brereton Diaz to 12 goals for the season. An inconsistent run of form over the last month has been more than made up for by their talismanic forward knowing how to score when it matters. Most teams Derby have faced have struggled to score more than once against them this season. Brereton Diaz himself scored a double in the first 20 minutes, enough to take Rovers to the brink of the top six. That will do nicely.

Boring, boring Bournemouth
And we mean that in the nicest possible way. Bournemouth do not create special moments for the neutral fan by virtue of just being that much better than everyone else. Another largely routine win at Reading on Saturday night sends the Cherries five points clear of second, nine points clear of third-place West Brom, and a whopping 14 points above Blackburn in seventh place. 14 points in the opposite direction from Rovers are Hull in the relegation zone.

It would take a disaster of the most epic of proportions to see Bournemouth not earn promotion back to the top flight from here, and they will likely continue to do it with consummate ease too. It may not be fun to those who play them and want to challenge them, but everyone connected to the Cherries will be loving it. For their sake, long may it continue.

Third-best West Brom
West Brom’s visit to Fulham looked capable of going either way, but these 90 minutes go some way to showing that West Brom are very much below the level of fellow relegated Fulham and table-toppers Bournemouth. If that appears an overreaction to a 3-0 defeat where all the goals were scored by one man, and the first of those a dubious penalty, then it is appropriate that such match winners are a key component in promotion pushes.

There is now a four-point gap from third-place West Brom to the top two, an equidistant amount keeping them from sixth-place Blackpool. With such lofty expectations on the Baggies this season, settling for the play-off places could be wrought with danger. They are quite simply not as good as either Fulham or Bournemouth. Valerien Ismael’s side are very much the third team in a two-club promotion equation, and they are the remainder.

Barnsley
That’s now seven up for Barnsley as they look ever more destined for going down to League One 12 months after coming so close to promotion to the Premier League. Having led 1-0 away to a team without a home win in over 10 months, it appeared that even Markus Schopp’s side would not succumb to a seventh successive second-tier defeat.

But this is Barnsley, by far the worst team in the Championship this season, and they are headed in only one direction under the current charge. Such is the state of the club and the stellar work that Ismael completed with them last season, even another change of manager is no guarantee of survival. There are far worse problems at Barnsley right now, but Schopp is not the solution to any of them.

Slavisa Jokanovic
After a disastrous start to the season for Sheffield United up until the first international break, Slavisa Jokanovic and the Blades looked like a match made in hell. There had been something of a reprieve to lift the South Yorkshire side away from the relegation zone, but a home defeat to Blackpool made it four losses in six, leaving United very much entrenched in the bottom half.

It would take a champions-worthy run of form to make the Blades even play-off hopefuls at this stage, and there is simply not enough about this team to suggest that that is even remotely plausible. As something of a promotion specialist and working with a club fresh from the Premier League, Jokanovic came in with only one thing on his mind. It would not be a surprise to see him already past the halfway mark of his Bramall Lane reign.

Stoke City, throwing away points
Even for a club with a penchant for throwing away points, not even the most pessimistic of Stoke fans could have seriously come to the conclusion that their Potters side would fail to win against a Cardiff side facing a ninth straight defeat square in the face. But then, this is what Stoke City do best – raise and decimate them in increasingly bizarre fashion.

In dropping another two at home to the Bluebirds, that was now 12 points chucked away from winning positions for the Potters already this campaign. Those dozen points are what separate Michael O’Neill’s side from the top two. Instead, they are ninth – and there are an increasing number of calls asking for the former Northern Ireland manager to make the changes required to win these games, or for him to be changed for someone who will. That early-season optimism is fading away just as quickly as their 3-0 lead on Saturday.

Millwall, Luton and Boro, remaining members of the 21 Club
Going into matchday 15, six clubs in the Championship sat on 21 points. At the end of play at this roughly one-third mark of the season, half of those progressed while Millwall, Luton and Middlesbrough all showcased their inconsistencies once more, conspiring to fail to collect a single point between them in games at Huddersfield, Preston and home to Birmingham respectively.

Of the clubs to have 21 points from the first 14 games, some case could be made for each of them to be in with a shout of a play-off place (it is an incredibly shallow pool of quality in the second tier this season), but those results, all without scoring, go some way to suggest that none of this trio has what it takes to turn their potential promotion charges into full-season tilts.